What Is Happening Now? Update + free short fiction [The View From There]

Editorial staff are preparing the list of names for insertion into the page proofs of the book, before sending  final files (internals and cover) for approval and sign off to print.

"We’re on the home straight…" Unbound tell me. I shall endeavour to bring a touch of Red Rum to said home straight, rather than Devon Loch. Thank you all for your continued patience.

So here, a propos of nothing at all, is a short story of the kind I used to write a lot, but not so much now.

The View From There 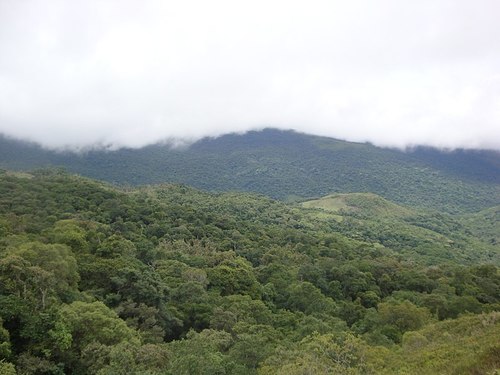 Sometimes we are above the clouds. We do not live in mountains. Nor are they hills. Montes is the word that we use. Neither hills nor mountains. No todo el monte es oregano†, we say – and it's true. So, we are not high. The clouds are low from time to time, that is all. Our village has a church, a cantina and one metalled road, which runs east to west and heads toward the real mountains many miles distant. My bare feet walked that road before any tar covered it and my stick gets caught now in the cracks in the surface. They will bury me in the cemetery by the church and the cracked bell will make the superfluous announcement of my passing to everyone left in our pueblo.

When the clouds come down, I imagine that time stops for us. Governments fall in the distant capital, oil is discovered and runs out, trees are cut down, more Indios move to the city and another language disappears. Maybe time does stop for us. My pick-up truck is a '57 Ford F-500 and my watch is a Timex. I still wear a hat and so does my brother Enrique, as does every male over 30 in Pueblo Alto. Not that there are many men under 30. They go. They go down, or up. They disappear into the clouds. Whatever, they go.

There are girls. They leave at 18. They steal away like the boys or are stolen away by education. A five mile walk to school encourages a love of learning, sometimes. Those girls who stay become matrons overnight, turning into their mothers or grandmothers or my wife, que Dios bendiga a su alma.*

We are a village of the old and the very young. Who knows for how much longer? My nephews are dust in the wind. The old men tend the maize and the women tend fires with cauldrons although we have electricity from time to time. I heard on the radio that someone sold a village in Spain for a dollar. Maybe we should sell our pueblo, I have 50 yanqui cents to make change.

The pick-up is with Guillermo. He is young enough to be my son. His hat is a cap, when he is working. He is performing open-heart surgery on the cylinder head, but the patient may not survive. I have nowhere to drive, nowadays. I sit, like today, on the low wall outside the church and listen to the dissonance counting the hours until it gets dark. I used to read but... Well, old age does not come alone, it's true. Over by the cantina – it is on the other side of the square – the Garcia brothers are playing pinfinger at a wooden table outside. They still have all their digits, although each of them has more than one that is as stiff as a metal-bolt. I haven't spoken to a Garcia in 25 years. Not since Rosa died.

One day, not too long ago, a man walked through the clouds into the village square. Shoulders square, he looked over 30, but he wore no hat. He wasn't from the next village along the road, nor from the one beyond that. He said he was a policeman, but he didn't have a uniform or even a gun.

'Is this Pueblo Alto?' He smiled as he said it.

'That is a name some use.' I smiled back at him.

'Are there others?' He kicked at a stone with a work boot that hadn't seen a building site or a farm.

The policeman did not stay long, although I could have told him of many crimes. Still, who can arrest a government?

†Not all of the hillside is oregano

*May God bless her soul

I quite liked this one, shame no-one I ever sent it to did! That's all folks!