Whilst we're all waiting for No Good Deed to hurdle the obstacles en-route to publication here is a teaser/taster/SPOILER re what's next for Moffat... 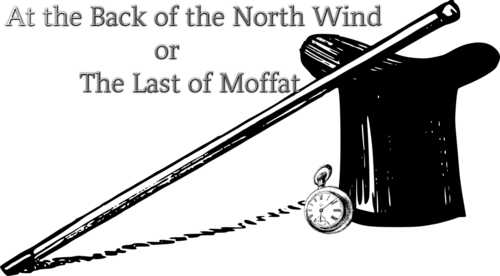 [Image made at canva.com with use of cooltext.com. Top hat and cane source Openclipart.com, watch source pending]

At the Back Of The North wind

The Last of Moffat

The whole agglomeration would not have looked out of place half a century ago, in the late Professor Jedermann’s laboratory. Copper cylinders, sheets and - somewhat surprisingly given the name of the contraption - wire were watched over by sturdy men in oil-stained clothing, though there was nary a drop of oil in the “Marconi Room”. Guglielmo issued instructions in his Irish-tinted English. He gave me the briefest nod: which cut me a little, since it was he who had been so insistent I attend the great event. I had shared a few Irish whiskeys with the Italian during the voyage from New York. He would became quite maudlin about his mother, whose family had been distillers in Ireland. The story of how she had met his Bolognese father might have been interesting, but he declined to tell me it. Instead, he prefered to bamboozle me with words like ‘coherer’ and ‘oscillator’. Even so, I listened and nodded when I thought it appropriate, Mr Marconi bought the whiskey, after all.

I had boarded the SS St Paul some 6 days previously, finally deciding to return to England after some fifty years. I had long since sent a letter to the office of John Brown & Son, King Street, Seahouses, though it would surely have been the son who received it. The letter was to be forwarded to a Miss Ellen Pardoner, if such a one were still in communication with the Notary Public. I meant to discover why the man in the mirror still resembled someone in the prime of life, when the image should have been that of a drooling dotard. Beneath all the folkloric piffle and tall tales I had been served with since first encountering the Family Jedermann at Gibbous House, there surely had to be an explanation, and I intended to have it, come what may. I only hoped that Professor Jedermann's outlandish experiments were not responsible.