Now, I appreciate - unless you've experienced the wonderful world of publishing in any other form than self-publishing - this news will underwhelm you completely. However, I was informed today that No Good Deed has just entered the copy-edit stage. This is actually exciting news, it does mean that NGD is very much nearer to landing in your lap, although the launch date remains a long way the other side of the start of 2020. So, forgive me if I give a whoop and a holler and a clumsy jig of triumph at the news. In the meantime, here is a story I once wrote about being in Berlin. Names are changed to protect the guilty. 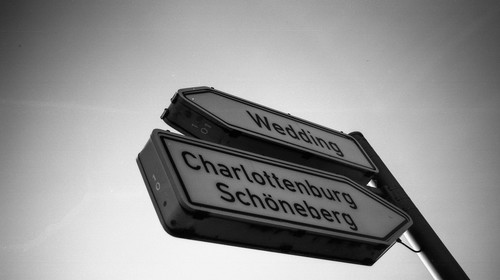 ‘We’re knackered, now!’ I said, out of breath. Doc rolled his eyes, unable to reply, busy heaving in a huge gulp of air, purple with exertion. And why not? It’s hard to run after fifteen hours on the toot, as he so quaintly called it. He was dressed as usual according to the Border Farmer’s Template #2 : Dances, informal dinners and meetings at the bank. That is, stout brogues, twill and Harris Tweed jacket. Not a common look in the fleshpots of Berlin, I admit.

We were knackered. Stuffed, stymied, stiffed or just plain fucked, if you prefer. The concrete wall at the end of our blind alley truly marked it as a dead end. Our pursuers hadn’t yet followed us in, but they would.

‘What the hell did you say to him, eh?’ Not that it mattered, the tall figure had taken the worst kind of offence.

‘I only asked him if he got fed up of ruining his tights on the bristles on his legs!’

Doc seemed to think this a perfectly reasonable question. And it might have been… On neutral ground; the Hofbrauhaus opposite the Zoo, say, or the Irish Bar in the Europa Centre. But we hadn’t been on neutral ground. Ranke Drei, the Warsteiner Pub had kicked out at two a.m. We hadn’t had too much to drink then, since we’d left under our own steam with only a few expletives to help us on our way. Friendly ones that is; Adriana, behind the bar, had once gone out with a Royal Welch Fusilier from Mountain Ash and the only English she could remember was ‘Fuck off, you English bastards’. Useful in the valleys I suppose. So, at 2.15 we’d had a choice; a taxi ride to Charlottenburg and ten marks a beer, or nip further off the beaten track into the bars on the sidestreets off the Ku’damm and Uhlandstrasse. We’d been in a few of these before, and, well, if we didn’t find precisely the one we wanted, we’d stumble on another.

‘What are you on about?’

‘Just look around the bar, Doc. Don’t kick off, just take a look.’

He looked. Then he looked like he’d stepped into a bar on another planet.

I put my hand on his arm.

‘Yeah, that’s right. Listen, what we’re going to do is…’ ‘ drink our beer, speak when we’re spoken to, pay the bill, leave a good tip and go, alright?’

It was a small operation. The shaven headed biker-type was doing duty as the only barman. He nodded at me, maybe he was saying I’d handled the situation ok. The clientele was quite subdued; maybe that was our fault. The music was playing at a civilised level for conversation; Erasure, Andy and Vince churning out electro-pop. I felt sorry for Doc: I don’t expect there were many places like this in Galashiels, not in 1984 at least.

Inevitably, someone came up to try their luck. Jacket and tie, fashionably cut he looked like a lawyer or a banker. He spoke immaculate English:

‘Your first time here?’ he raised an eyebrow at me.

‘Yep, a mutual friend has played a joke on us…’ I gestured at Doc and shrugged.

‘Of course, my name is Kurt. I am the owner, please have another drink and then by all means take your leave.’

He smiled, I expect this wasn’t the first time, someone had blundered in by mistake. Kurt held two fingers up to the biker and made his retreat. I was starting to think we would depart with our dignity - and the other customers’ – intact. Doc drained the last of his second beer. I winked at Kurt and headed for the exit. I stepped round a tall woman. And Doc didn’t. I was half way out the door. Turning, I saw an amicable conversation… until a large meaty hand slapped Doc’s face. I went back grabbed his arm and frog-marched him out. The door slammed behind us. We stood under the street light, I was too angry to speak. The door opened, Kurt and the tall woman came out shouting

But we were already running.

‘This way, it’s this way. Two left turns and we’ll be on the Kanstrasse, in the light and in the traffic, come on.’

We ran. I was wrong. So we were waiting by overflowing skips, in front of a concrete wall, in a dead-end street.

‘Ready for a kickin’ then?’ asked Doc.

Kurt and the woman appeared at the alley mouth. I could see Doc tense up.

‘You really must be more careful, gentlemen!’ said Kurt, as he handed Doc his wallet.