One More Spirit in the Labyrinth 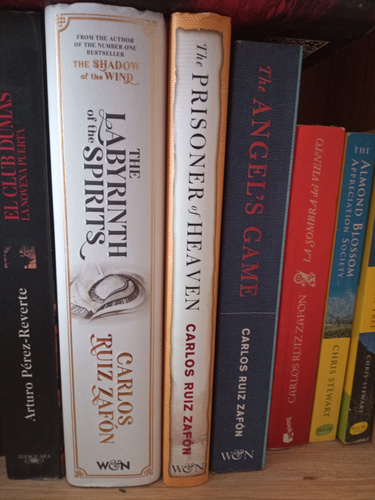 Just found out today that Carlos Ruiz Zafon has died from cancer. When I read The Shadow of the Wind on publication, I was absolutely flabbergasted. So flabbered was my gast that I read it again a week after I finished it. Translated, as all of the Cemetary of Forgotten Books tetralogy were, by Lucia Graves (look her up, interesting background), I wondered if the book was actually so good, or if the translator had worked magic on it. Shortly after I moved to Spain, in 2004, I read La Sombre del Viento in the original Spanish. The magic was Zafon's own, although Lucia Graves's translation is one of the best translations of anything I've ever read.

Anyway, after reading La Sombra, I began a CW course with the Open University. I wanted to write a novel, and I did. I knew and know. whatever I wrote then or write now would never be as good as LSDV, but that did not and does not matter. I missed the chance to see him at a book-signing in Madrid by a week. So, for good or ill, Gibbous House, No Good Deed and Moffat are all, at least partially, Zafon's fault and although the wider world may not be so appreciative, I most certainly am.

This is something I wrote in about 2007, a definite effort to mimic the style of Zafon in translation - purely as a writing exercise, you understand.

"A story is a letter than the author writes to himself, to tell himself things that he would be unable to discover otherwise."
— Carlos Ruiz Zafón (The Shadow of the Wind)

Often it's a love letter, but this story is not. They say there is no love between those who do not have the spark of enmity. Luisa Aragon Ramirez was not my enemy, but my best friend. It is true there was no love that could have been made by us together. She held my secrets and I still treasure hers. I told her when Antonio offered to be my agent. I told her when he sold my book to Calderon. I told her when my lover sold my letters. We drank coffee in bars and walked through El Parque San Juan in raincoats and under parasols, sometimes on the same day. She was beautiful, I knew. Others admired her – both at a distance and at close quarters, when they would proposition her before my eyes as though they knew I could not object.

I noticed the pallor long before she told me. The shortness of breath and the sitting on every bench in El Parque. Like the best of friends she searched my face and lied to it. There was nothing wrong, she said – just a little tired. One autumn day as we watched the leaves fall, I waved to a former lover. She pointed at the figure, 'not the one, after all?' She said it in a gently mocking tone, but I felt I heard a descant of sadness, for me, for herself.

Her bed in the Hospital Parque San Antonio was in a private room. She never said, but I felt she would have preferred the company of invalids to none at all. Except at the end, of course. The last week was raving; delirium interspersed with short periods of apparently dreamless sleep. I am glad I held my mother's hand, at the last.