No Tub-thumping Here, I Do Not Want Your Money Today 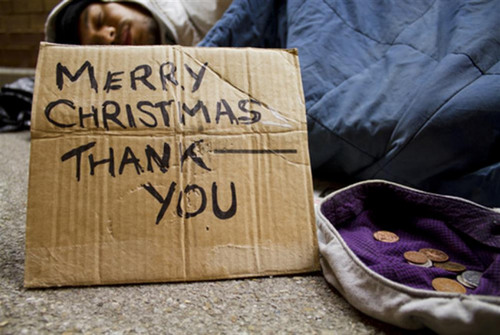 Four years ago today, the following piece was published as part of A Christmas Tetralogy of writing by Unbound-ers. I was very proud to have been asked. Bearing in mind I wrote this 4 years ago, I hope you realise how shocking it is that when people ask me what's the biggest change in the UK after a 16-year sojourn in Spain, I say the number of people sleeping in the streets.

So no, I do not want your pledges, patronage or pounds today. After you read the story. Give a pound to the person you usually walk right past, buy them a sandwich, take that not quite full box that's been in the utility (!) for 2 weeks to the food-bank or volunteer at a shelter.

You could stand around for 15 minutes in Curry's/PC World before they moved you on. If the staff saw more than two of you watching flat-screens they'd all be changed to CNN. With 3 weeks to go; the grinning, perma-tanned presenters would be wondering if Times Square would be under snow on the 25th. White Christmas, that's all they talked about. He'd wait the shop-assistants out though. 10-minute news-cycles could never get too boring while you were warm.

They were all so young. Even the manageress. Yuill remembered when there were several electrical goods shops on the High Street. The best was Rumbelows. Its manager was the same age then as Youill was now. Mr Creighton, always good for 50p for … well, whatever. Dixon's, Comet and Curry's saw Rumbelows off the High Street and now Curry's/PC World lived in the permanent indoors of the Arndale Centre. That's why he made for the shop when the temperature hit the minus numbers. It was why he no longer had a dog. Still, the dog had been good company back then. Creighton used to let Athanasius into the shop, when it was quiet. As it was, most of the time.

When she'd been pressed-uniform-new it had all been, 'Can I help you with something, sir?' or 'Were you looking for something in particular?' Six months it had taken her to be promoted to manageress. Yuill suspected she might have a degree. In what, he couldn't imagine. It seemed everyone had one nowadays. His own university days were over 30 years ago. He felt that someone else had presented the papers and published those learned books. Who actually cared whether The Gospel of Thomas contained the words of Jesus? He looked back towards the snake of misery at the cash desk. Tired people buying things others didn't need with money they couldn't afford. A new meaning for 'The Nature of Q'. Yuill shuffled out of the store.

At least it wasn't raining. He fastened his duffel coat. He could just get it on over the parka. It was amazing what people threw away for the sake of a torn pocket or a missing button.

Thirty years ago he'd have walked along to the Salvation Army Hostel, tried for a bed and got a hot meal. The building was a Walkabout now, nothing free in there. It was seven o'clock and the office- party smokers were outside already. He'd watched these 'parties' start ever earlier in the month. Time was they were impromptu affairs after the last working day before Christmas. Now they were nightly from the 1st of December. Yuill waved at Robin. He sat with his ill-spelt placard outside the door of the Honest Lawyer, a proper pub. Robin was only in his 20's. He might have been a soldier once. He'd probably have more luck there than outside Walkabout. Robin's hat contained typical December takings – very little. Yuill occasionally made a placard when he stood outside Tesco on the outskirts of town. He printed the word 'FOOD'. Occasionally people would give him a tin. He thanked his lucky stars that most tins had ring pulls nowadays. He'd used to open tins with a hammer, with varying results. It was often better to explore the waste bins outside the superstore, although you had to watch out for the retired Sergeant Major who treated the car park like his old parade ground.

Yuill was heading for the flyover near the by-pass. There'd be company for the night. Most were too tired to shout or fight by midnight, but the best shelter had gone by then. Ten was usually a good time to arrive. The only risky part was crossing the rail track. For once the dark was helpful, you could see the lights coming for miles.

He could see two figures following him. He hoped they were Police, anything but young people. One of them stumbled. The other helped. Maybe they'd be alright when they caught him up. Just the track to cross and then a hundred yards to the flyover.

He was half-way to the flyover when they reached him. It was a man and a woman. Her coat wouldn't close over her stomach.

'Please, you are going somewhere safe?' The man's teeth shone white in the dark.

'Well, relatively speaking. To the flyover. I have blankets. A friend looks after them.'

Youill looked at the woman and wondered how much they'd paid to cross half of Africa and all of Europe – and if she had known she was pregnant, when they set off.