No News is Good News. (And some free fiction...) 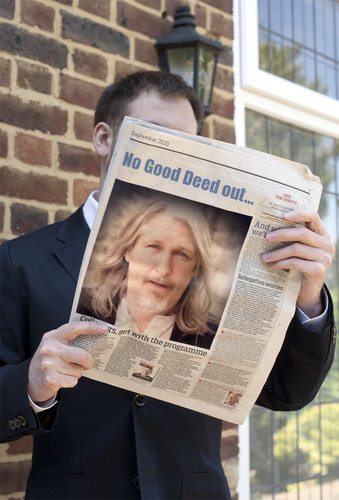 Would you like the good news or the bad news?

The good news is I have a scheduled date for No Good Deed's publication.

The mitigating news is, honestly, that Unbound are very much a victim of their own success. They have LOTS of books at the same stage as mine is, finishing structural edit, pending copy edit. In traditional publishing, 18 months to 2 years is a normal lead-in, sometimes it's longer. The problem with Unbound is the authors have to tub-thump (crowd-fund) the project first. This time, that took 16 months instead of the 16 weeks for Gibbous House, whose tardy arrival was another story entirely.

Anyway, I would like to thank you for your patience. Please leave a comment below to show you still read these. In the meantime here is some more writing. It's free too!!

Juan Carlos pulled the strap of his rucksack higher. It kept slipping, a new one might not. But why change these things? Some luck lived on in the most unlikely places, after all. Besides, since the last real job had evaporated... Well, you couldn't eat canvas and plastic, could you? Juan Carlos was waiting for Ramirez under the overpass in the Parque Lazarillo Blanco: the Ronda del Este, the main motorway eastwards to Almeria cut through the greenery. It was sad, but what could you do? They were going to try Calle Ivan Turgenev tonight. Ramirez's idea. 'Why not?' Juan Carlos had thought. Nothing to lose. Not now. He looked out into the night. Malaga's neon and sodium vapour made the stars invisible. A while back, he'd done a job out in the Axarquia, you could see the stars there, but they weren't the same as at home.

Ramirez's lit cigarette end glowed red. Juan Carlos stifled a laugh; lit tobacco outshining stars and streetlamps, how was that possible? He had met Ramirez in a bar on the Guadalhorce Industrial Estate. They'd got to talking. The Mexicano had just left one of the working girls and was slaking a different thirst with a bottle of Cruzcampo. Juan Carlos wondered if Ramirez knew his sister, but she hadn't been seen in the area for six months. Maybe she'd gone back to La Paz, but he knew that wasn't likely. Anyway, Ramirez had suggested working together. So that's what they’d done. Had been doing for a month or so. Things were OK. Pickings were there. If you looked hard enough, you could get what you needed. Had the Mexican eaten today? Juan Carlos hadn't. His pockets were empty and his wallet held just his ID and a creased photo of Manuela and Jorge, their faces smudged by fingerprints.

'Venga!' Come on! Ramirez jerked a thumb over his shoulder.

They left the park, crossed waste ground, passed disused buildings. Then into Turgenev; a road of detached villas and swimming pools. There wouldn't be any Guiris – foreigners- here. Excepting themselves, of course. Juan Carlos made for the first house on the left, Ramirez held his arm and pointed to the house wall within the compound.

They sauntered along the road. It was sometime after four, Juan Carlos reckoned he'd been waiting half-an-hour under the overpass. He'd looked at the clock in the Bus Station, when the Guardia Civil had moved him on. Ramirez stopped at the second to last house on the right.

The stucco perimeter wall had buckled at the corner. It would be a scramble over, no need to boost the Mexican and get a hand up. Juan Carlos kicked a loose piece of concrete on the way, it shattered on the patio below. Ramirez held a finger to his lips and winked. Nothing happened. The roof on the dog kennel was stoved in and there was no water bowl on view. A rusting chain hung from a rustier metal loop attached to the kennel's breeze-block wall. They went round the back of the house. People put the decorative metal bars - rejas - on the front windows and doors. They didn't bother round the back. Face. Andalucia was all about face. Ramirez looked through the glass of the french windows, gave a thumbs up to Juan Carlos. Ramirez's teeth gleamed as the door handle yielded to his hand and they stepped inside.

A clock on the wall showed twenty-five to five. The tick was slow and echoed in the long kitchen-diner.

'Okay, do it!' Ramirez gave a stage whisper.

Juan Carlos made for the bedrooms and made sure. He nodded at Ramirez as he left the last of them. They did what they came for and disappeared into the night.

A day later, they were sitting at the bar in the Guadalhorce, Ramirez sipping another Cruzcampo, Juan Carlos - a fino.

'Seen the papers?' Ramirez asked.'They just don't get it, do they?'

'No, I don't suppose they do.' Diego looked at the cheap Casio on his wrist.

Ramirez threw his copy of 'Sur' across the the bar to his friend.

Juan Carlos took one of the four five euro notes from his wallet, laid it on the bar.

His partner was still chewing his bottom lip, Juan Carlos read the article.

'The dull thieves missed 10,000 euros in a kitchen drawer. The family, including both pre- school daughters, slept through the burglary, only discovering that it had occurred when they saw the breadcrumbs and dirty glasses on the table. Sr. De La R____ of Calle Ivan Turgenev said “I don't understand it, they stole a plastic watch and 50 euros in five euro notes. They emptied the fridge of more money than that!'