Precisely. I do expect some news before the end of the month. DHpq'nq4pt, Damn! It's hard to type with crossed fingers, isn't it?

But this publishing lark IS a waiting game. You wait so long, you forget what, (or whom) you're waiting for, at times. Two puzzles today. The first is: see if you can find the word I made up in this post. No prizes, just the kudos, I'm afraid.

So as promised, some short fiction. Puzzle two? Well, those of you who guess exactly who is the subject of this hommage (you can almost see the finger-quote marks now, can't you?) , or - more correctly - being ripped off, will be thinking 'how dare he?' And you'd be absolutely right of course. Nevertheless here, for your perusive delight and delectation is,

Enemies Of The State 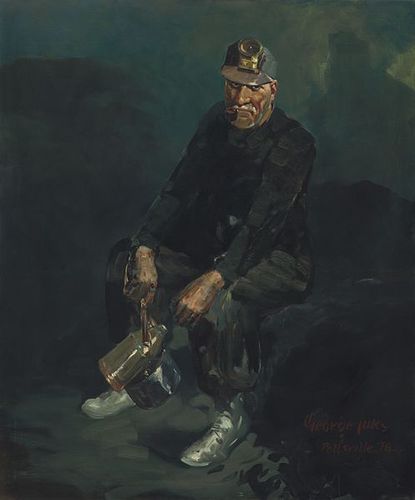 'Indeed not, it is Friday, I shall partake of the sole.'

Vladimir Ivanovitch Beketov clamps his lips to the sole of the boot handed to him with some delicacy by Pyotr Stroganov, who does not care for his Patronymic, since it is Vissarionovitch, and this has distasteful connotations for most of the inmates of the camp.

'This is as fine a sole as ever I have tasted since … when did I have sole last?'

Beketov and Stroganov, like many of those working in Gold Mining Operation 34 b section 7 of the Magadan Gulag, are serving a sentence for the most Soviet of all crimes.

'Somewhere in the world there is a war, you know.' Stroganov replaces his boot.

'There is always a war, somewhere,' Beketov says,' thank you for sharing dinner.'

Beketov looks back down the length of the section they are mining.

He kicks at the rock hammer and pick lying in the dirt.

Stroganov looks up at the beams keeping the weight of the earth from burying them alive. He shines the lamp at the walls of the shaft. There are dull yellow flecks in the rock.

'All that glisters is not gold, it is true.'

'He was Russian, you know.' Beketov removes a canine tooth from a raw-looking gum and puts in in his pocket. He keeps all his lost teeth.

'Indeed he was not,' Stroganov protests. 'Shakespeare was a true Georgian.'

'Bosh! A Russian and a Bolshevik at that. In the first:' Beketov holds up a gnarled and blackened finger, 'He rewrote history from Caesar to those interminable British Henrys.'

Beketov raises a second finger, equally filthy and bent, 'He has claimed others work as his own.'

This time his fellow miner nods.

There is no third finger raised since Beketov's disappeared with its ring on arrival at the Gulag,

'And those glorious, glorious titles 'Much Ado About Nothing and All's Well That Ends Well'? Are these not slogans worthy of the Politburo?'

Stroganov laughs, 'You forgot his Anti-Semitism… Anyway, he is Georgian, he died on St George's Day and some say he was born then too.

'Always joking, Pyotr. I hear Stalin was going to ban Georgian jokes, but he was frightened he might disappear himself.'

'It is not we who have disappeared, Pyotr, it is everyone else. There is nothing but the Gulag.'

'Hah!' Stroganov has pincered a creeping, crawling thing between a finger and thumb. 'Dessert?'

Beketov shakes his head, 'I've had one.'

'There is only yesterday.'

'No, I know that, I mean how do you know there is nothing else?'

'There is no evidence for its existence.'

'And if we were, it does not mean it still exists.'

'No New York, no Hollywood!

Pyor 'no-patronymic' Stroganov laughs, 'Was there ever any evidence that they existed?'

'They must have, to get the Nomenklatura so upset.'

'You know, we could be arrested for talking like this., Volodya.'

'On what charge? We should ask for a re-trial!'

'Khuliganstvo, and you need to have had a trial before you can have a re-trial.'

'Hah! Only a lawyer would know such things.'

Stroganov looks once more down the length of the shaft they have been working since yesterday.

'Do you think he will come?'

'Maybe.' Beketov picks up the rock hammer and swings it at a likely smear of dull yellow.