I've had confirmation that No Good Deed is definitely going ahead, as planned, for the revised date of Jan 2021. So, as long as we avoid the other nine plagues of Egypt between now and then, patrons' books should arrive in time for Christmas.

I don't often write about my days in uniform, this week's short story is an exception. They're all life writing, rather than autobiography. That just means that I've changed some names, put words in the wrong mouths and generally avoided law-suits.  Other examples can be found on a free download here. Anyway, this is called Denial, and joins up the two halves of my less-than-illustrious military career quite neatly. 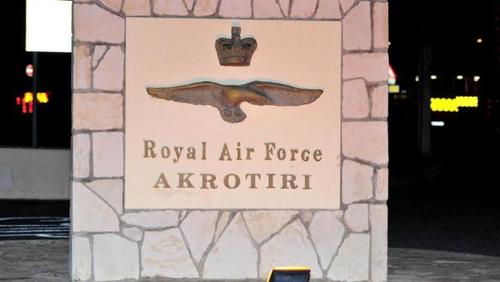 Another cool, cypress-Cyprus night: nothing to hear but the dynamo hum of the insects; nothing to see but the indigo sky dominated by Orion overhead. We were sitting on the veranda, Jock and I. In two mismatched armchairs, next to an industrial-sized water cooler. It was 2 a.m. – 0200 local, if you like. Jock’s cerulean eyes were shiny with a tamazepam glaze. Years ago, Bomber Command crews took bennies to stay awake during night missions; we had taken tranks to get to sleep before an early start: progress.

Jock had his nose in a book, his lips moving from time to time; maybe the words meant a lot to him, maybe they meant more if he did that.

‘This is a long way from the Ku’damm…’ I wanted to talk.

A Land Rover with RAF police markings rumbled past: doing a sweep of the storm drains for drunken airmen. They were too early by an hour or two.

- ‘D’you remember when Dave..?’ I persisted, sick of the noise of the bugs.

- ‘Actually I dinnae.’ He seemed annoyed. ‘You oughtae remember that was aw 20 years ago, for me.’

And he had a point, it was: I’d been there longer. I remembered his time there ‘though, and, sure, the memory-film slipped in the sprockets, the monochrome was faded and scratched; but, you know, that happens to films when they’re played too often.

- ‘Come on, Jock… you must remember something.’ I was a bit annoyed myself.

How could he forget? I didn’t know. The Mediterranean receded as my mind’s eye zoomed out. A jump cut to the 94 bushaltestelle; nine on a late January morning: waiting for the bus to the city. Jock, me, Paddy: Dave was on restrictions, washing pint glasses in the Officers’ Mess kitchen; Dave got caught for anything and everything. All of us were a little bleary, weary: first days-off in the shift cycle, we were up early, after a night in the NAAFI.

- ‘This is just the best, you know,’ Paddy’s cultured tones filled with enthusiasm. ‘Grünewoche, I mean.’

Grünewoche – one of the few words every Brit in Berlin managed to learn. Greenweek it meant.

- ‘Like you’ll even see the livestock hall!’ I jeered.

And the truth was none of us would. Greenweek was Berlin’s annual agricultural show. Produce from all over the world on show in the Messegelande: West Berlin’s futuristic exhibition centre: Guinness, Elephant Beer, Tiger Beer, Fosters, Amstel, scotch and Irish whiskey, aquavit, vodka.

Phil, long gone, had seen the fresians one year: demonstrating an alarming lack of skill in the art of rodeo - before being arrested by the Berlin Police, who handcuffed him to a lamppost out front, while they waited for the MPs.

Jock stumbled as we got off the bus near the Funkturm, West Berlin’s radio tower: a mini Eiffel dwarfed by its uglier East German version on the other side of the wall.

‘Had a few swallies in the room, after the bar closed. I’m OK’. Jock gave a lopsided grin.

I paid the entry fee for all of us: my round would be later, now. Jock wrote my name on the back of his hand.

- ‘Ireland. Guinness, come awn!’ Jock had perked up a bit.

I went with the flow: Paddy had wanted to go down Weinstrasse for a couple of years. Two phalanxes of stands dedicated to German vineyards, free samples at every one, if you played your cards right. The owl-like JB had donned a suit and tie one year, successfully posing as an Oddbins buyer. So well, in fact, that the following week he was summoned to the guardroom at the main gate to explain the arrival of 30 cases of hock with his name on them.

They were more organised nowadays of course: we’d had no more than 5 free glasses each before we were politely advised to visit other parts of the exhibition. Like France.

- ‘ Better eat something, eh?’ I showed off my schoolboy French to the stunner behind the counter, I just wanted to hear her speak.

- ‘ I love those French birds.’ I announced: ‘they have a certain Je ne sais pas.’ As it turned out that was me: the oysters arrived.

- ‘Wha’ the fuck are thon?’ Jock was horrified.

- ‘You mean you don’t know?’ An incredulous Paddy.

Jock picked up the shell, carefully, finger-and-thumb, trying to reconcile keeping it arm’s length with putting the oyster in his mouth.

- ‘Arrrrrrrrrrrrrgh!’ The oyster trampolined across the counter, Mam’selle ducked for cover behind it, a hair finally out of place.

- ‘It’s fuckin’ snotters, ye bastards!’ Jock bellowed. We headed for Denmark, for blondes and Elephant Beer, Ireland was next door.

- ‘More pish! When do we get shum deshent beer?’

- ‘Jock, it’s decent enough by the sound of you!’ Paddy grinned.

- ‘It is nearly six percent proof, Jock, is that not strong enough?’

- ‘OK, keep your eye on him Paddy.’ I warned, suspecting Paddy’s eye would rather be on Astrid. Ireland was the stand next door, one of the bigger ones naturally. He’d be alright.

- ‘Just two more Astrid, thanks.’ Paddy smarmed. I raised my eyes at 5 feet 10 inches of Nordic cliché: got a smile back. Smarm isn’t everything. I liked Elephant beer, stronger than Carlsberg Special Export and probably named for the feeling you got after four; that of being run over by one. I remember daydreaming for a bit, probably fantasising about Astrid, while Paddy kept trying. Suddenly I heard shouting in an all-too-familiar accent.

Ireland had round table tops on tall barrels; a country for standing in. France, of course, had had comfortable chairs. It was still relatively empty in Ireland: only Jock sprawled across a table with his hands locked around the throat of a soutaned priest.

I jerked my head over the border, threw 20 deutschmarks on the counter. Astrid stared open-mouthed toward the drama in the other bar.

Paddy had Jock by the scruff of the neck: I asked the Priest:

‘What’s that all about, Father? Can I get you a drink?’

a Guinness, a chat, you know…’

As it happened I did.

We took him away, to explain it to him, while the 94 bus rumbled over the S-Bahn tracks crossing the Heerstrasse.

And Berlin faded out, as the diesel-rattle of the crew bus went down to idle. Jock put his bible in the leg-pocket of his flying suit.

- ‘You really don’t remember?’ I asked for the third time.

I wondered if he could hear the sound of the cock crowing in the distance.