I am very pleased to say that the editor allocated to No Good Deed is Rachael Kerr, who did such a brilliant job on Gibbous House that I didn't dare hope she would be available for No Good Deed. I should get some things to work on by mid-October.  All being well final proofs could be ready as soon as January. As you've all been so patient here is some fiction to be going on with... 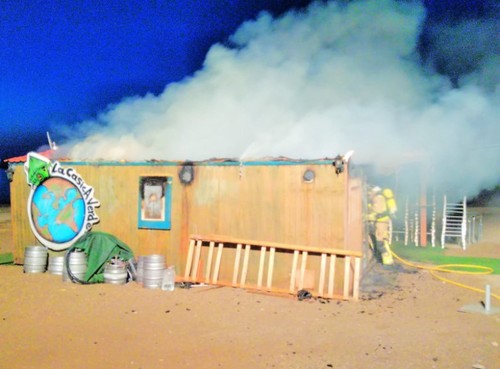 [This image was from the Majorcan fire service's web-site I think. It doesn't show up on TinEye at all, unless any queries about this image's use are in Spanish, they should be ignored]

Sand and Glass
Glass. One or two, a pair, a pane. A mirror’s made of glass. It fascinated him. Glass: how could you
make it from sand? Sand, it’s just silica, after all. All this because of something made of sand. A
lazy laugh leaked from his lips: it had started with a glass, in a bar surrounded by sand.

‘Hi,’ she’d said. ‘I’m Mandy.’
He’d have made a joke about an old song but she wouldn’t have been born. So:
‘Hi, Mandy. I’m John.’ He tried a smile. Got an almost-smile back.
She was holding out a glass, they were sitting in a chiringuito on the beach in Banus. It was off
season, wind blowing through the building. The roof looked like raffia, the bar didn’t open if it
rained.
‘What is it?’ John asked.
‘I don’t know,’ she replied. ‘You haven’t bought it yet.’
He came back with two sticky glasses missing the parasols, which disappeared out of season, like
the tourists.
She took a greedy slurp, licked some of the sticky fluid from her lips :
‘Mmm. I like it, Caipirinha. Not vodka though, is it?’
‘No, um, cachaça. Roberto smuggles it in when he comes back from Bahia.’
‘Not Spanish then?’ she asked, dipping a finger in the drink and sucking the fluid greedily.
‘No,’ he took a sip, held back a grimace at the yet-to-be-acquired taste. ‘Who is?’
She laughed. He thought it sounded like bubbling water in a spring.
Mandy looked at him, her irises so brown they melted into the pupils.
‘And you, what are you?’
‘I’m here.’
The spring bubbled again:
‘I like that.’ The dark eyes fixed him again: ‘so am I.’
He waved a hand at Roberto, who was cajoling the other customer into buying one for the road, or
at least the pavement. Two more drinks appeared on the barrel head. She moved her long-legged
stool closer, laid a hand on his forearm:
‘What do you do?’ she put her head on one side, waiting for an answer.
‘This,’ he replied. ‘I do this.’
‘What? Sit in beach-front bars?’ She took her hand away from his arm.
‘Just this one.’ He took a drink, a real one this time.
‘What’s so special about this one?’
‘I own it.’
Mandy’s hand came back. He was expecting it on his thigh. But she was better than that. She laid
her hand over his.
‘Just this one?’ She had that almost smile again.
‘Nowadays.’
‘Why?’
‘The less you have, the less you need.’
Her face hardened, ‘Never been poor have you?’
‘Not yet.’
She laughed, ‘I can fix that.’
And he laughed too.

So he laughed now at the memory of it and rolled over on the sand, closer to the wooden wall of the beach-hut bar he used to own.