Hello all, (or both, or perhaps just you). Please do not read if you want to get to the end of Moffat II before you read anything about Moffat III. Mind you, you didn't think I'd kill him off after just two books, did you? You did? Oh well, sorry to disappoint you. No Good Deed is undergoing a copy edit at the moment, so in the absence of any news about when your copy will arrive, here is circa 1000 words of the WIP that is Moffat III, which has a working title of 'At the Back of the North Wind or The Last of Moffat'. 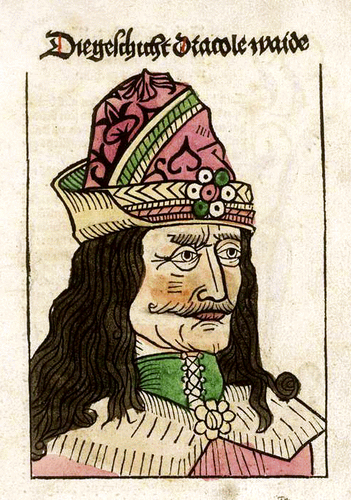 [Image is from wikipedia.de the German version and is gemeinfrei which means Public Domain]

If either of us had been expecting the man at supper to leap to his feet on our approach, we would have been sorely disappointed. I was taken aback, however, to note no reaction at all. The mechanical rise and fall of the spoon to the dish continued, with an impressively loud ingurgitation in counterpoint to it. We sat. I was quite content to permit Cattermole to steer the encounter, besides, I was hungry myself. The man finished his soup, folded his hands in his lap and stared, not at Cattermole, but at me. Cattermole was already speaking, in what I presumed was his customary accent, rather than the heavy brogue. Perhaps he thought the latter unsuitable for the surroundings, or his costume. I was reminded how much such things mattered on the more civilised side of the Atlantic. The matter of my own attire remained in my thoughts as I listened.

‘I have brought him. The one you’re looking for. Yes, I have.’

Cattermole could not remain still on his seat. He was continually rubbing the palms of his hands both together and on the material of his trousers. The man opposite me said nothing, as far as I could tell he had blinked but once since we had joined him at table.

One of Cattermole’s hands flew to his mouth. At last there was some reaction from the living cadaver. His lips drew back, thinned until they were but two attenuated lines of carmine against his sere skin, revealing teeth as crooked and yellow as a pye dog’s.

He unfolded his long body from the chair. His lower limbs did not take so long to straighten, for the man was of no more than average height. I covered my surprise by extending my hand,

‘Moffat, at your service. At whose service might I be?’

The smile grew still wider, till I thought the corners of it might meet at the back of his neck.

‘Why, Moffat, I am surprised you do not recognise me, I am told I look very like my cousins.’

And he did, both of the two that I had met, though one had been an homunculus Professor and the other the man behind the plot that ended in the conflagration at Gibbous House. I took the man’s hand as was only polite. The hand felt cold, as damp as a fish, but the skin was as smooth as that of one who had never lifted a finger in any kind of labour.

‘You are at the service of Benjamin Jedermann, I am recently arrived from Romania.’

The waiter arrived to remove the empty soup dish. He carried it away holding the edge by the very tips of his white-gloved fingers. The soup looked to have been borscht or at least comprised of some red-coloured liquid. We sat down once more. Jederman looked at Cattermole and said ‘Leave us’. I caught Cattermole’s eye, he shrugged, and I determined that I would seek him out for an explanation before too long. He scurried off, relieved to be out of our company.

‘Your name, was it a secret to be kept from me?’

‘Not especially. Although I prefer to travel incognito for the most part.’

‘Why is that, Jedermann?’

‘I’d have thought you more than anyone would know that names are important. Knowing someone’s true name confers power on those who discover it.’

‘Which of your names would you like me to use?’

He laughed, ‘I am travelling under Stoker.’

Which utterance I rewarded with a laugh of my own, as he seemed to expect one, though I had no idea why it might be considered worthy of it. He withdrew something from his coat pocket and passed it from one hand to the other, before opening both hands and showing their empty palms,

‘In my experience it consists entirely of trickery designed to fool the gullible.’

He raised one setiferous eyebrow and said,

‘Are you quite, quite sure?’

At that moment I began to cough, then choke, feeling a sharp-edged obstruction in my gullet. I could not dislodge it. I confess I began to panic. In spite of this I was aware of the self-styled ‘Stoker’’s look of mild interest as he observed me choking to death. Finally, though I am not sure it was entirely due to my own strenuous efforts, I ejected something very hard onto the table before me. Jederman trapped it with his hand palm down on the surface.

‘Would you like to have it?’ I shook my head, wishing to indicate that I could not speak.

‘Once more, are you quite, quite sure?’

I gave a shrug and pointed at my mouth. This provoked a bellow of laughter that would have alarmed other diners, had there been any. He lifted his palm, to reveal a gemstone. A diamond, larger than any I had ever encountered. To my eye it was around 35 carats, which made it larger than the famed Beau Sancy. It was an unfamiliar cut, and nothing like the double pear rose of that particular stone. His hand fell to cover the diamond and a glass of porter appeared in front of me. The waiter backed away and I took a deep draught of the sour black ale. Jedermann removed his hand once more. The diamond was gone. I opened my mouth to tell him that I knew the stone was now up his sleeve or hidden elsewhere about his person.

‘Save yourself the trouble of speech, you will find it difficult for a while in any case.’

He stood and removed his frock coat, turning the sleeves inside to out. He turned out the pockets. His trews had none. The waistcoat pocket contained only his fob-watch. He made to remove his trousers, but I shook my head violently.

‘Drink up, Moffat. It will do you good.’

He was uncommonly sprightly for a man of such evidently advancing years and was dressed by the time I drained my porter.

‘I am Jedermann, but some call me Vlad. My cousins do not speak for me, Moffat. I wish you very good luck.’ He shot a glance over my shoulder, ‘Ah! Cattermole back at last.’

I turned to look. Cattermole was descending the staircase. When I turned back, Jedermann was gone. I was sure I could hear the fluttering of wings. I picked up my glass, thinking to drain it of the dregs. There were none, just a large diamond of a very unusual cut.