Another reminder that the Supporters' list for No Good Deed closes on September 6th. This means you need to check the name going in the front or back of the book is the right one. It's also a good time to check that you haven't moved house in the time since you so generously helped the book on its way. I've moved house twice and countries once - but that's another story - since the campaign began. So do please check out the name and address for your order here.

As promised here is a short-story of fairly recent vintage. I don't write many short stories now, preferring to work on longer projects, but I quite like this one. I think it's short and neat "with a lot packed in a little" as someone was kind enough to say. Anyway, here is 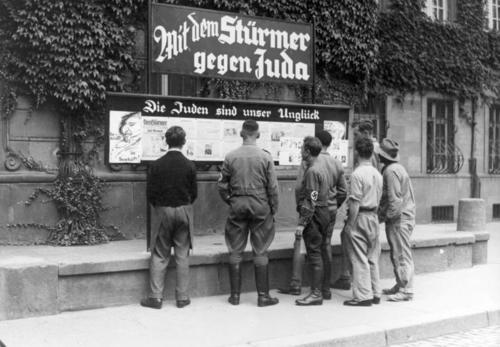 If you opened the paper at all in those days, you were a party-member. The Völkischer Beobachter wasn’t all that was on sale at the news-stands, but it might as well have been. Since Mosse and Ullstein had fled or been forced out of their own company the choice of reading sang only the one note aria in the prevailing government’s voice. And how it had prevailed. 17 million had voted for him in the ‘33 elections. Some said that 17 out of 62 million wasn’t enough, but they didn’t say it very loud.

From 258 seats in a uni-cameral house containing 647 to a single party state in 3 months. You wouldn’t have said it was possible. Many of us said it would be impossible. How wrong we were.

I bought magazines, although not from news-stands. These magazines, well, they were periodicals, I suppose. Anyway, they were published by the brave and the cowardly in secret, on mechanical presses and in tiny numbers. They were sold under the counter at the metzgerei, the bäckerei and for all anyone knew in the Kerzenständerei. We learned to keep secrets. I had watched Karl Fleischman be marched away from the last kosher butcher’s in Berlin. His family followed, a few days later, including my Klara. She was only sixteen. None of them had ever set foot in the synagogue.

On my 18th birthday, when the call-up papers arrived, my mother cried and my father cheered. My father had fought on the Western Front. His party number was low, low for Berlin anyway. He had the Iron Cross 2nd Class in a velvet lined box on his night-stand. He didn’t know about Klara, but my mother had known. The Führer was a presence in our house, of course he was. His picture was above my father’s night-stand. Above my mother’s was a crucifix. There was no lamp or candle on the stand, just a bud vase with a single artificial flower. A white rose. I did not know then what her secret was.

Klara’s brother was a friend. Not my best friend, no. Not the sort of friend you told secrets to, though I had none to tell, until I met his sister. That wasn’t a secret to share with her brother, in any case. Gershon knew all about what had gone on in 1933, how Germany had ceased to be a republic and became one man’s personal fiefdom. He had been 15 then, as I had. He used read newspapers, especially the ones they later banned. He had listened at union meetings though too young to be a member and still at school. I would still be kicking a football against walls or stealing an apple from the greengrocer on the corner for a dare.

We didn’t think it would come to the pass it did. Nobody did. There were just enough people like my father who believed it was time for a change. Time for someone to stand up for the working stiff, the real Germans, the war veterans. My father knew of my friendship with Gershon, and though he had never voiced any disapproval, the only thing he said when I told him the Fleischmans had been taken away was,

‘Sacrifices must be made.’

And I asked myself by whom.

My papers said I had to report to the nearby barracks the next day. My mother helped me pack. My father was at the kneipe, drinking with the other ex-soldiers from our district.

‘Are the rumours true? That you may fight in Spain?’

‘The rumours say just that, but they are only rumours, nevertheless, Mutti.’

‘Come with me,’ she said. We went into the other bedroom. My mother picked up the bud vase, took out the flower and shook something onto the table. It was a tiny six-pointed star. She held it up, then hid it once more in the vase.

Ciao for now. Don't forget to change your details.