Another significant milestone on the way to No Good Deed's appearance as a real, live book. The list has closed, the Names of all those who backed Moffat's new adventure will be forever immortalised in the List of The Magnificent Beneficent in the front or back (depending on level of beneficence).  I will get final proofs as soon as they are ready and subject to there not being any major gaffes (Gibbous House had my surname wrong on the title page), No Good Deed will finally go to press. Had it not been for Covid, No Good Deed would have been out this month, so my book has not drowned among the 600 new titles released tomorrow by the publishing industry. I'm sure it will be quite capable of floundering among a much lower number in January. Anyway, due to these circumstances, since May, this book has been running along a similar timeline to Gibbous House, back in 2016, which should mean... Books before Christmas!!

Well, here is some short fiction. One thing people who don't have an association with the Armed Forces often don't get is the concept of "stolen valour". This story is called "Walts". 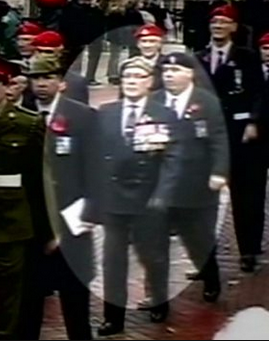 [Image is from a facebook page that outs "walts", so I don't think the image use is a problem]

On the corner, there are two boys playing pitch and toss. I see them most days. I hear the clink of the coins on the cracked pavement and spalling bricks. Sometimes they whistle a song from when I was young. I heard the guy who sang it is in jail now. Sexual offences. I hear the words of that song in my head sometimes. I wonder if those boys see me, or my dog, Schiele, and where on earth they heard that song. No-one bothers them, not even the PCSOs who move me along, when the council or the local MP is up for election or they just feel like it. One of the PCSOs is called Sheila, I haven’t the heart to tell her that my dog isn’t a bitch. If they do move me on, I pick up my beret, any money in it and my chalks. Then I walk down to the canal. When I look back the boys are still there, playing their endless game. If it’s Sheila who has sent me on my way, I wave, but she doesn’t wave back.

Now I’m walking along the canal path as far as the lock on the edge of town. From there I’ll make for the old Rolling Mills. They’ve been empty since I was the same age as the boys from the corner. We played in them, despite dire warnings about tramps and “being interfered with”. As if that couldn’t happen at home, or school, or church, or at the corner shop, where Mr Chesney lived with his mum. The shop is still there. Mr Singh won’t let me in now. So, I get the drink where I can. One place is at the back of one of the last of the back street pubs. The Alma in Inkerman Street. Freddie sells me a few cans and some knock-off Vladivar at only fifty percent over the odds. It’s a long walk from the corner though, so sometimes I use the ASDA out on the ring road. Cross a couple of fields behind the Mills and I’m there. I keep The Alma for benefits day or if people have enjoyed the chalked images on the pavement. Some like Kirchner’s Nollendorfplatz, others prefer his Self-Portrait as a Soldier. Perhaps, they notice the beret on the paving stone beside it and my disruptive pattern trousers. We never did call them “combats”.

Even if I still had them, I wouldn’t wear my medals. I didn’t have many anyway. Some of the veterans I see on the street have seven or eight. Chalkie is twenty years younger than me and ten years older than them,: he says they probably deserve three, since that’s how many wars they’ve been to. People forget how soldiers were treated when I served. Nice middle class boys spat on us and worse. Thatcher’s storm-troopers, that was the least of it.

I saw H go down. And no, the bullet did not come from behind him. He was a bit too keen, that’s all. Reckless. We followed him though, because that’s what you do.

Sometimes I wish I’d gone to Art College all those years ago, before the South Atlantic. It was for the best though, after what happened. Michael couldn’t have stood it. Not for five years. So I stopped it from happening to him. Mum was drunk. It was 8’o clock. Michael was in bed. I heard the footsteps on the stairs. I prayed the door-handle wouldn’t move and when it didn’t I wished that it had. The crying started. I got up and grabbed a piece of heavy quartz I had been sketching for ‘A’ Level Art. Michael kept crying after I had used it.

I threw the body over my shoulder in a cack-handed fireman’s lift and made my way down the stairs. There was no moon or stars to light my way to the canal. Our semi-detached house backed onto fields and I skirted the limits of the town until I reached the canal, near the old Mills. It was about a mile. I stopped four times to catch my breath, but he was no great burden. Not for “a strapping lad”. The first time Michael’s father had said those words were after the last time he touched me, three years before. I threw him in the canal and walked home.

The Police came after I reported him missing two days later. One month after that I signed up. Mum signed the papers in exchange for a bottle. It was May 1980. Two years later I was at Goose Green.

I don’t mix much with the others. There are two kinds of veteran on the street. Those who seek out ‘old comrades’ although it’s rare to encounter anyone you served with, and those who don’t. There’s a third kind: a “Walt”. A faker, boosting the takings when they beg wearing stolen medals and trousers bought in an Army Surplus shop. Begging. Who would do that if they had any self-respect? Some real vets do beg. I give them money myself, if I have a good week, after I buy the booze. Most of these guys have PTSD. It was called shell shock when my Grandad had it, Mum and I lived with him for a while before she married Michael’s father. He hid under the dining table whenever a fire engine went past. I hate Walts.

I’m at the old Rolling Mills now. No glass in any windows. Blackened sandstone rises up and it’s easy to see where that dark satanic business comes from, even though there was never any cotton in this factory. Steel. Rolled and pressed steel - but not for a very long time. Some of the roof spars are still there, but the lead and tiles are long gone. As are the doors. If the land was any good for anything it would have been sold for development years ago. Something about residual contamination. Well, we all have that.

I did go. To Art College, I mean. After I finished my 6 year stint. Honourably Discharged. You discharge a weapon, don’t you? In the mob, firing a weapon when and where you shouldn’t was called a “Negligent Discharge”. It was a serious business. I reckon our papers should say “Negligently Discharged.” I finished my degree, but I didn’t graduate. There was a difficulty with one of the lecturers. It was 1989. We were still fascist pawns, then.

Twenty-eight years I’ve been on the street. It was very hard at first. You’d have been a mug to make too much of your military service then. There were no such things as Walts in those days.

Speaking of Walts, there’s a frightened man tied and gagged in a space that might have been a workers’ canteen once. I do hate Walts, and their stolen valour. I whistle that song, while the words go round in my head.

“Walts” is military slang for people who pretend to have served in the Armed Services. It is derived from “Walter Mitty” James Thurber’s fantasist.

Have a good week!