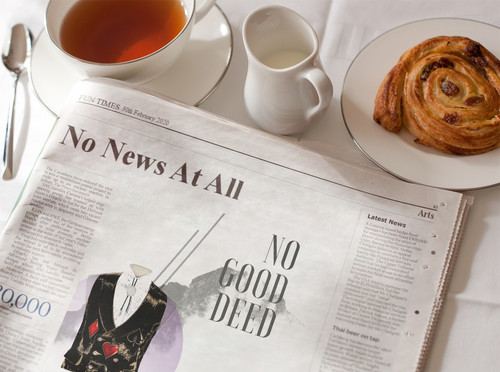 [Image made using free to use online site]

Sometimes I wonder why I bother. Right back at the beginning, before Unbound moved offices, when it was more like a cottage industry than a publisher, even some Unbound employees used to read these. Now I reckon I could count the people who actually do read these on the fingers of one of Bart Simpson's hands. I get it, you're so sick of getting e-mails  - about books you're never going to put hard cash into - that anything with 'Unbound' on it is straight into spam: no ifs, no buts, no maybes. But you know what? I'm going to keep writing them, putting the odd bit of flash-fiction, short story or even poetry in them. Why? You ask (or maybe Why won't he stop it, please?)  Because the 161 of you did back my book with hard cash, during a very tough two years for most people. Because I think I owe you something extra for that reason. Because even if only three of you read these, three of you do read them.
Anyway, a propos of that, here is

A Party for Abigail

He finishes laughing. A jet of tobacco juice misses my scuffed boot, but I reckon the old man could have scored a toe-cap, if he’d wanted to.

‘I’m sorry, Sir,’ I say, ‘It’s just that I’m late -’ I look down at the ground. These old geezers like a bit of humility from outsiders asking directions.

The old guy’s beard is without stain, I hope the ornery cuss hasn’t any stones in the pockets of his bib and brace overalls. They’re not new, but they’re damn clean. Cleaner than my store-bought suit has been since I started this trip.

‘Late, eh? Whut in tarnation are yuh late fur? Ain’t no-one had a job round here since the ‘Peachment.’

I look behind him. At the empty barns and rusting silos. There are three tractor tyres perished down to the ropey cords inside. Wood smoke curls from the chimney of a pop-gun shack between the barns and the silos. A shot-gun through the front door would blow it right down.

‘Hell, ain’t no-one died in a six-month frum round here! ‘Ceptin’ the Williams family whut useta have the hardware store in town. Anyways, they was inna accident on the road. Damn if I know whut for they wanted to go to Detroit anyhow. That’s more’n three hunnert miles, ya know? They wuz nearly there too. Guess they’ll a been buried right there at the side a’ the black-top.’

The old man’s eyes squint as though there were some sun in the grey sky.

‘Sounds like you early for that funeral, ‘at case.’

He moves his head and spits a long way to the side. The wind blows it still further away from me. I keep my counsel. Silence makes everyone nervous. Almost everyone I meet, at least.

The man draws out a pocket knife and cuts himself a chaw and gestures toward me with the tobacco and not the knife. I like a man who is careful not to offend. He sees me shake my head and nods as though he knew that I wasn’t the type to share a plug.

He sighs, ‘My name is Ezra Goodfellow.’ He holds out a hand to shake.

I tell him I don’t shake hands. “Allergies.”

Even so, Ezra wipes his hand on the rear of his overalls.

I decide to put him out of his misery, at least to a certain extent.

His shoulders slump. ‘Ain’t no-one here by that name.’ I know that already and I ask him where she is, right now.

‘She ran off. Right after the last rain. I hear she’s still with that other guy. My son’s best friend, huh!’

He makes to spit, but thinks better of it. A man who swallows his tobacco juice will speak with one of those robot voice boxes sooner or later. He might see me again sooner than he thinks. But that doesn’t matter now.

The old man lifts an arm that doesn’t quite straighten and points a finger down the road ahead.

‘Ten miles and you’ll be in Contention. Not much uvva place, leastwise not now. Abigail and the bonehead got the gas-station on the way outta town. They ain’t much custom but that’s okay ‘cuz they ain’t got much gas. The old guy sold it ‘em for two cows and a clunker that woulda got him all of three miles on a full tank.’

He stays silent for a while. Perhaps because I haven’t moved, not even turned my head to look down the dusty road.

‘They’s a motorsickle in the nearest barn. An Indian. I started it a month ago. You might could make it as far as Contention.’

The man turns to look along the road down which he spent an hour watching me walk and spits into the dust.

The Indian starts with the first kick on the pedal. Abigail is waiting, although she doesn’t know that.