Moffat III, tentatively entitled At The Back of the North Wind, has now reached the following state

The manuscripts sent to Unbound at funding-target-reached stage:
were
Gibbous House 105,416 words
No Good Deed   79,327  words.

So, depending, I'm nearly half way or just over a third of the way there. I have no idea how long the book will be. Ideally, it will be half way between the two. Since I don't know where I'm going with it - don't worry - that's how I write everything - it will be as big a surprise to me as it will be to you.

So here as promised is some short fiction. No prizes, but some kudos if you spot the Tom Waits song title in the story. 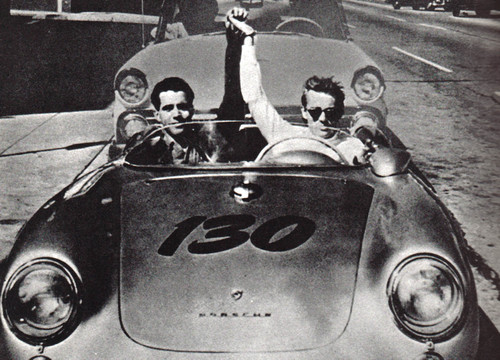 I saw the cloud of dust bloom in the distance. The flat plain stretched further than any eye could see and the fields melted into hazy sky. It hurt to look at it, so the distant dust was a relief in some ways. My backpack was uncomfortable to sit on, after so many hours. I stood up and looked at the tiny puff, watching it increase speck by speck, wondering how far away the vehicle was. After a half-an-hour, I could see it was a pick-up truck, but had no idea what colour it might be. I lit my last Lucky and waited. My Waltham showed that an hour-and-a-half had passed since first sighting the dust, when the pick-up pulled up. It was black, under the red dust. A '37 Plymouth. If the driver had been a young man when he'd bought it, times had been hard. He wore a Fedora with a dented crown, the brim was black with the stains from sweating hands.

His upper lip had the crumpled look of a man missing teeth, I guessed that was why he didn't smile.

His laugh was the bark of a junk-yard dog and I got in on the passenger side. The man moved the stick-shift and floored the accelerator.

I looked back out of the rear window at the dust we raised.

He gave his barking laugh and a cough, before adding,

We rode the highway in silence for a while, the man offered me a plug of his chewing tobacco and I took it, but placed it in the pocket of my shirt. From time to time the man spat a jet of tobacco and spit through his open window. The pick-up continued straight and true while he twisted his neck to make sure it was not blown back inside. After the second or third time, I took a look at the back of his head and made a grab for the steering wheel. He did not move his head, merely growled,

He kept his eyes on the road a little more after that, once he had spat out the chaw itself.

He had a medal dangling from the rear-view mirror. It swung and jerked and jolted to the rhythm of the road. It looked like a St. Christopher, but the damned thing never hung still enough to look at the image on the gold.

Later, in the dusk, I could see a few trees up ahead and the silhouette of a wood-railed bridge. The river was no more than ten feet wide and was fringed by the only green I had seen for the entire day.

'Jes' a river. The Pane, but don't pay that no never mind. Tain't much more than a creek, bet it ain't even on a county map.'

He made as if to spit out of the window, but realised he hadn't a chaw in his mouth. We left the river behind. The flat horizon was pierced by the outline of buildings huddled in a mean little group.

The hands on my watch showed a quarter of seven. My stomach was reading after midnight.

He looked at me, and I noticed the hollows in his cheeks and the scrawny wrists.

'That's Gateway, we ain't stoppin' there. Not worth it, jes' a place to pass through.'

'If yer still hungry, when we cross the next but one river, we'll stop in Night's Daughters.'

He laughed and I thought that junk-yard dog's bark would have had more cheer in it.

His voice jerked me awake. Looking behind I saw moonlight glinting off the surface of any the river.

'One more river to cross?'

'Yep, that wuz the Sleepy River, guess it woke you up.'

His laugh turned to a coughing fit, but the pick-up rolled on straight and true.

I looked over at him, and asked,

'You pick-up many riders out here?'

A tic moved his lower eye-lid four or five times.

'Always someone on the road to nowhere, ain't they?'

'I guess you are at that, my friend.'

The black sky was pricked by a million stars and the moon hung amongst them like a Christmas bauble. There was no other light to see until a faint glow on the horizon line.

We crossed the other river, and it was more worthy of the name. A metal bridge with stone-built pillars sunk deep into the river bed bore us across as my tour-guide informed me of the river's name;

'Stick's River, big enough for the county map, I 'spect.'

'Hell if I know,' and he laughed once again.

'And Night's Daughters, what's that? Ain't it a town?'

It was a wood-and-clapboard, two-storeyed building about five miles outside of Deep Hollow. The road arrowed past it towards the town as if disinclined to allow traffic to stop at the mean place. There were no more than four vehicles outside the building. I guessed most, if not all of them belonged to the people working there. The old man parked the pick-up beside a '59 Impala which still looked brand-new. The whitewalls gleamed under the neon. The sign overhead was a lurid pink, flashing 'Western Maidens' into the flatland night.

' This a whorehouse or a roadhouse,' I clenched my fists and stepped towards the old-timer.

He stepped towards me, I caught a whiff of brimstone breath as he said,

'Either, neither, take your pick, pick-a-card-any-card, why doncha?'

I stepped away in the direction of the entrance, turning back at the door to look at him.

The roadhouse door opened and I stepped in.

There was a bar and behind it two batwing doors into a short-order kitchen. It was mostly just one long room with round tables scattered amongst chairs for company. A staircase led up to a second floor at one end. Three women sat at one of the tables. They didn't look much like whores, apart from the make-up. They looked like housewives on a night out in Decatur, Deloite or Duluth.There were three of them. The red-head was eating a yellow-skinned apple. The blonde was smoking a cigarette and the brunette was filing her nails. Each of them had a kewpie-shaped bottle in front of them and a tumbler of half-melted ice. No-one stood behind the bar.

The redhead spoke, 'Do fer yuh?'

The blonde stood up, 'Kin do some eggs, hash browns and steak, that's all.'

'And a beer?' The blonde pointed at the brunette. 'Aretha'll get that.'

She walked into the kitchen and I wished maybe she at least had dressed a little less like Mrs Podacker from Deloite.

A cigarette had appeared in Aretha's mouth by the time she stood behind the tap. She blew the suds off my beer with a gust from the side of her mouth and a cloud of ash fell from the tip of her cigarette onto the dirty bartop.

Some of my beer stayed in the glass as she put it on the bar. Watching her walk back to the table, I wished her clam-diggers had been a little tighter round the keister. I moved to sit at one of the tables near the two women, but the red-head crooked her finger and then pointed towards the fourth chair at their table.

'Keep company, sir, it's only polite.'

Close up, she was the oldest of the three, but it was hard to tell whether any of them were 22 or 42. Their clothes were demure enough, but I couldn't help feeling that, beneath them, there was much to tempt any man.

The golden-skinned apple was reduced to a stalk whilst I waited for the blonde to come back with my order. There was no conversation and I supposed we were keeping polite company, the two of them and I . My platter came through the batwings preceded by the curve of an out-thrust hip and I reflected that I had been walking the plains too long.

' 'Joy your meal, sir,' she said as she placed paper-napkins, a rusty knife and a bent-tined fork beside my plate of meat and potatoes. I said thanks and ate head down. From time to time one or other of the women would let out a laugh and the others would join in, though I heard not a word from any of them until I'd finished eating.

'That good?' It was the blonde. I told her it was.

'Anything else?' the one not called Aretha asked, then she ran her tongue along her teeth and so I said no.

The red-head stood up. Then she ran her hands down her flanks, for all the world as if she was wearing some pencil skirt that had ridden up a little while her legs had been crossing and un-crossing with a rustle of nylon.

'You sure about that, sugar?'

I asked whose was the Impala outside. I threw a dollar bill on the table, but they didn't say goodbye as I left.

Outside the old man was leaning back against the hood of his pick-up, legs crossed at his ankles, hat pulled down over his eyes.

'You et?' he said before placing his Fedora on top of his head once more.

The jalopy started first time, the dinks and dents in the dusty body-work said nothing at all about the engine. I reckoned we'd travelled 200 miles without a cough.

'Nearly there now, son.' He attempted a smile for the first time. I hoped he wouldn't again.

'Guess so, what kinda place is it, anyhow?'

'The kind you're looking for, son.'

I laughed in his face.

He turned to look at me, caring as little for the road as ever.

'Oh yes, I think it's for you. We got most everything and everyone.'

A sports car passed us, hellish fast, I hadn't seen or heard its approach across the plains.

'Little Bastard,' the man said. 'Most everyone, son. Like I said.'

We crested the ridge and began the decent into Deep Hollow. The man spoke again.

He dropped me on Main Street at 11.30 in the evening. The lights were out in every building

and people wandered the streets in silence or they howled at the crescent moon.

Well, there you go. Until the next news or the the next bit of FREE fiction.