Not long to go now. No Good Deed is at 104%. There are 167 backers now and 3 bluebirds have landed in the last fortnight. Good omens. The eagle-eyed amongst you will spot 'Final Designs' and a fixed publication date on your screens of January 2021. All being well your own copies will arrive in time for Christmas this year.

Anyway, here is this free short piece of writing. Let's call it life-writing, because it did happen. Some names have been changed. I'm posting it because... well, the other reason is the photo came up as a 'memory' on social media. It's long, but you know, "never mind the quality, feel the width". Here is - 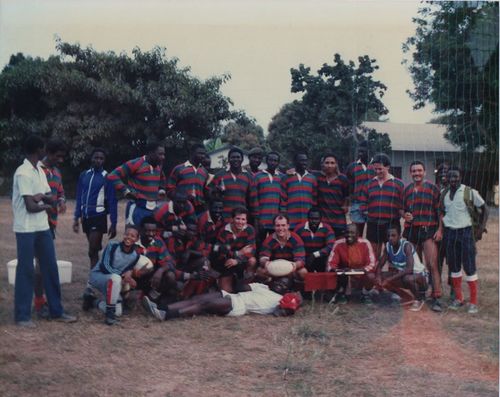 [The team after playing against the then RN training ship, photographer TY Lawrie, used by permission]

At the far end, perched atop each post, two hook-beaked birds eyed each other. From time to time, one or other made a movement which would have entailed the ruffling of feathers, had they not been quite such poor specimens. I turned to Giles, who was about five metres away.

The referee blew the whistle before he could answer.

It had seemed such a good idea beside the pool. I’d spotted the short haircut patrolling the sun-loungers and tables soon after he came through the archway that led to the beach. He walked stiff-backed, stopping occasionally for a polite exchange with any man between 20 and 40.

Jem looked over at me,

‘Policeman,’ he said, nodding towards the khaki-shorted, polo-shirted Caucasian making the rounds of the hotel pool.

‘It takes one to know one.’

I scratched my week-old beard and took a drink of my mai-tai, then waved at George, who was the daytime waiter for this side of the pool terrace. George loomed over me, dark skin gleaming in the Banjul sun.

‘Yessir,’ his smile was as wide as the Gambia river.

‘Who’s that, George?’ The short-haired guy was about four tables away.

The waiter grunted, looked down at his own military style white jacket and the incongruous shorts and flip-flops,

He must have caught my look, because he said,

I gave George a 10-delassi note and declined a drink. He looked both ways over his shoulder, before slipping the money into the pocket of his shorts.

Jem was yawning. He’d arrived on holiday the same day I did, a week ago. I knew how he felt. Our wives rolled over onto their backs and began the basting process on the front of their bodies. Funny how neither of us offered to rub the suntan lotion in. The Army bloke had arrived at the next group. We’d spoken earlier in the week. Giles, Jacinta, the two kids; Harry and George. And the au-pair. Of course. Giles was a solicitor from Henley-On-Thames. Jem and I weren’t. Jem had been an Assistant Stage Manager at the Bristol Old Vic years ago. Now he sold fax machines. I didn’t talk about my job. There were two kinds of people then: people for whom any military person was Thatcher’s storm-trooper, and those for whom the armed services were the finest people they’d never met. I usually preferred the company of the former, as long as they didn’t want to talk about my job.

Khaki Shorts finished with Giles. I hadn’t quite been able to hear the conversation. Just made out the words ‘tomorrow, I’ll pick you up, ‘ as the Army fellow was on his way to Jem and me. He looked about 30, so I reckoned he’d be a Staffy; a Staff-Sergeant, with his own unit, whatever that was. His glance passed over Jem, and he gave me the hard stare.

There was a tiny movement in his cheek.

‘Can you play rugby?’

‘There’s a game tomorrow, if you want it.’ He nodded over at Giles, the beginnings of a smirk on his face, ‘Giles is up for it.’

He looked me up and down, ‘I’ve got boots that’ll fit you.’

I looked over at my wife. She looked at me over a Danielle Steele paperback and shrugged.

‘Played much have you?’ The soldier raised an eyebrow.

‘Not since school, no.’ He looked like the fat boy picked last for the playground kickabout.

The soldier held out his hand,

‘Kevin, Kev, come along tomorrow, I’ll see you get a few minutes.’

They shook hands. Kev held his hand out to me. I shook it, gave him my name.

‘What position d’you play?’ he asked.

‘So does Giles, you’ll have to toss for it.’ He jerked his head over to where Giles had been, I could see him splashing the au-pair in the pool.

The field was dust. Not a blade of grass. The posts were rust-scarred and - at our end of the pitch - one was quite bent. At the far end the posts accommodated the two vultures awaiting the outcome of the game. Giles and I had tossed a 1 dalassi coin in the changing room after we’d taken our first look at the pitch. I’d lost, so I was playing scrum-half. I could already feel the dust behind my contact lenses. God knew what they’d be like at the first scrummage.

It wasn’t a great game. We were playing for the Gambian Army team. Kev had wanted to put some ringers in the technical positions. Giles was playing fly-half, I’d be passing to him for most of the game. Jem was at full back, looking clueless. One of the Privates had been arrested in Banjul the night before, not even Major Jammeh could get him out of Banjul Jail, so Jem got to play after all. The opposition should have been quite tasty. Royal Naval Officer Training Vessel, HMS Achilles. The ship had pulled into Abidjan for some shore leave. A bus ride had brought the team down to Banjul. The sailors were drunk for the first half and hung over for the second. We lost 11-8. Jem scored a try.
Kev oversaw the delivery of some crates of the local beer. There were photographs, Major Jammeh and the Gambian soldiers beaming with their arms round Giles, Jem and I. The Navy guys and all of us in a group shot, cans raised in mutual salute. The local fire service came and the Gambian players got a post match shower. Kev offered the three of us the use of the shower at his house, before the party at the British High Commission.

Kev was in uniform by the time I got out of the shower. Tropical KD, long slacks. Obviously not an entirely formal do. Sharon, his wife, had been down to the Novotel to pick up ours. She gave a loud blast on the horn of the Lada Jeep and we followed them to the High Commission in a Toyota. Two very smart and tall Gambian soldiers wearing metal and feathers atop something resembling a Grenadier Guardsman’s uniform waved us in. It was a big place, mock-Grecian colonnades and huge verandahs to the front and rear. It had certainly been built when Banjul was still called Bathurst. Achilles’ Captain and his officers monopolised the High Commissioner. I’d expected that. Giles looked a bit put out, as he was clearly the kind of person he’d been to school with. I talked bollocks with Kev, gave him a totally invented history of my military career. He probably didn’t even know the RAF had a base in West Berlin.

One of the navy Chiefs, my oppo on the pitch in fact, drew me aside. His face was hard.

‘Not even the bloody Major!’ He spat the phrase out.

‘Do you see any black faces not carrying a tray?’

Of course there weren’t any. I couldn’t believe he had been so naïve.

I like to think he was the one to leave the odoriferous little gift in the sink in the High Commissioner’s en-suite bathroom.