Here as promised: a free story. It's an old one. From one of my creative writing course assigments, long ago. "Write what you know." I tried, I really did. This is probably as good as it got for any writing I did about my service days. The difficult trick is making it interesting enough for people who weren't there. British comedy (and serious) writing changed in 1960 when national service began winding down. Before that, it was something every male did, imagine the common experience that gave. Dad's Army and Get Some In were chiefly written and watched by people who had 'been there, done that'. With one TV in the house, their children watched them too.

Very few people have a clue what military life is nowadays. Least of all me, perhaps. Everyone served in the best times, 'it's not the same now', we say... And of course it isn't. How could it be? Some things don't change though. Anyway, this, for what it's worth, is called 'Gun', which would have horrified some of my very good friends from the RAF Regiment. 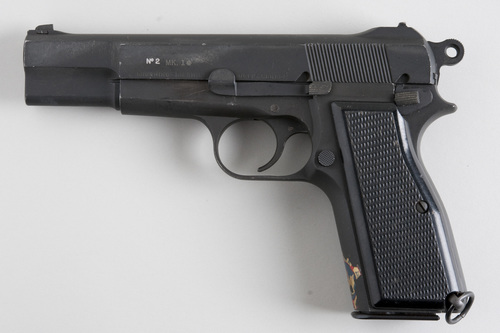 Did I check that? Is it on? Quietly now. Pull it out. Fingertips, sweaty. Thank God for the chequered grip. Anyone watching? Heavy on the wrist. Rotate clockwise, quick look. On. Thumb it anyway – just to check. I should do NSPs. Normal Safety Procedures. Always hear this kind of jargon in Goon Show Army Speak. Dear old Spike using an accent closer to his own or Sellers slumming in the East End

'Self Loading Pistol, 9MM Browning, Aircrew for the use of.'

Inventories: everything back to front.

It shouldn't even be loaded. I'm indoors. In a converted store-room that houses the base guard force. Everywhere's on the highest alert I can remember since the Provos blew up Mrs Tebbit. Hijacked planes have wreaked havoc on the US of A and we're armed up and waiting for Jihad to strike rural Lincolnshire. Plain-clothes RAF policemen are on watch in front of the Indian takeaway outside the camp-gates. The guard force are the usual varied bunch, a bitter 40 year old Corporal supplier, cocky 20-ish aircraft technicians of either sex. Oh and we have a cook, so at least we never run out of tea and coffee. Cookie offers me a cup. Creep.

'Come on then, let's 'ave yer.' I even do it myself sometimes, see. I'm the only one who thinks it's ironic.

The next two for 3 hours on the main gate get up ve-ry slowly. I'm aircrew, not a real sergeant. There's no point telling them I've got 20 years in and half of those as an airman just as chippy as they are.

We go out to the butts. Waist-height pits filled with sand.

'For inspection po-ort, harms!' Even I'm convinced. The aged Corporal and one of the techies hold their SA-80's chamber up showing they haven't got one up the spout.

'With a magazine of 20 rounds, LOAD!' The corporal fumbles getting the magazine out of a pocket.

The techy's was lying on the wooden lip of the sand-pit, ready.

The Corporal gets his on eventually.

I'll have to show my face at the main-gate later. It's supposed to keep up morale, but everyone thinks you're just checking up on them.

'See you in an hour,' I say. 'Be careful out there!' This gets a laugh from the techy, but not the corporal.

I perform an illegal unload of my weapon over the butts. I rush it, but get the magazine out safely. On final check, it turns out I've had one up the spout for 3 hours. I pick the round out of the sand and jam it in the magazine. I'll need one of those cups of tea now.

Bet you can't wait for next week's now... 'Til next time.

Ah, so it was a gun in your pocket after all :)

One of the few times, thankfully!

'Never give a gun to a man you wouldn't trust with a tin-opener'
B.Mallett