As promised, flash/short fiction at no cost at all to yourselves... Save your generosity in the matter of Moffat's return. 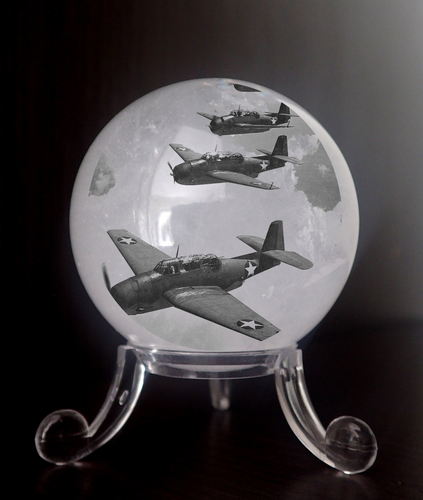 [I made this image from two different ones, the origin of one of the two components of the collage is under investigation, the crystal ball is from Pixabay.com. - be a shame if there's a problem though]

“We should head west, west!”

I heard the panic in his voice. Even over the R/T, as they so quaintly termed it. The Flight Leader was the instructor. The dolt must have believed that he was over the Florida Keys, because he lead them east. To death, legend and myth. I went with them, as I always do. The Shadow, Loki, The Wicked One, The Mischief. My names were, have been and are Legion. Flight 19 perished through human error. I am happy that people believe this.

There are other things laid to my account. A re-named caravel out of New York bound for Genoa. Briggs and crew all in the missing lifeboat. The Mischief gives up no secrets, no more than does the sea.

Back and back we go into the mists of time; HA, do not make me laugh. The past is fog at best, I do mine to make it smoke and mirrors.

Look, look down into the water. See it move in the bowl. Do you see him? There he is, atop the tiny hillock. The grass is brown. It is November in Dallas, the average 2 inches fell at the start of the month. From this distance the dust in the air looks like mist, or fog… or smoke? I see it, do you? A figure, a shadow – not The Shadow, not I – the second gunman they will call him. Look deeper into the water. Pouf! Haha! The closer you look the less you see until the image disappears. As well try to grasp your shadow in your fingers, no?

You prefer the scrying orb? Some do. At your service. A lovely silk this, is it not? Something I have learned from believers and those that gull them. The show! Mach Schau! Razzle Dazzle! Oh yes, I give them the old Razzle Dazzle. So I have the crystal ball and tarot cards and knucklebone dice and Chinese sticks: I keep them all in silk scarves and ivory boxes carved with symbols that mean no more than symbols written on the sandy beach. For no-one is more susceptible to cheap trickery than the believers. Whatever they believe.

Here. You press it. On/Off. The greatest boon to my work. Ah… the pleasure of it. Strike your keys of choice… 9 … / … 11. Oh splendid! How splendid. Yet I must not take all the credit. No, oh no. The believers invent, obscure, adumbrate and do much more than The Mischief alone may ever dream of. Indeed, I may retire…