I'm expecting final proofs and artwork for approval in the next ten days, subject to tiers remaining the same. No more tiers, I say! Anyway, for all of you who have been so patient here is another thing I wrote a while ago when I still lived in Spain. It's not about anything much, but it has a little atmosphere... 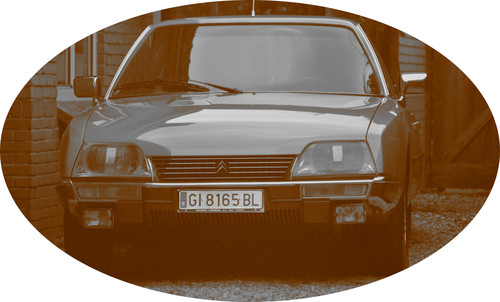 Gerrit wound the window down. Hot air blew in, as hot as the air in the car. He'd bought it to drive down to Southern Spain. Only rock stars and Arab sheikhs had air-conditioning in cars in those days. This old Citroen would do him now. Perhaps he'd ask to be buried in it. He smiled, imagining the Andalucian bureaucrat faced with that conundrum. It was nothing but a fantasy, of course: a funccionario would shrug his shoulders and you'd go up in smoke at the crematorio and the ashes would be cleared out with the clinkers, whatever your wishes. Besides, you couldn't ask someone to try and get something like that done for you after you'd gone. They'd never forgive you. Who would he ask anyway?

The roundabout was five cars away. Gerrit hadn't decided which exit to take yet. Right and he'd have the sun behind him, so there would only be the heat to contend with. Left, and he'd be squinting all the way to wherever. Straight on was the tiny car-park for the Anglo pub, “The Roundabout” no less. You never saw any Dutch bars, not even in the boom. It was odd, for there had been a lot of Orantjes down here then.

He switched off the engine. The guy in front had done the same. Not Spanish then. The guy behind was, he had sounded his horn about 10 times when the queueing had started. Now he gave a desultory parp, when he felt like it. It had only taken 20 minutes to reduce the number of cars in front to five from around thirty. You could hear the new arrivals at the tailback in the distance. Always at least ten angry blows on the centre of the steering wheel, unless it was a foreigner, of course.

If he went left he'd park in Lidl's car park and walk up to the Gitana's bar. He'd never, ever seen a customer in there. Of course, he hadn't ever been in after 9 at night, but still. The Gypsy woman would have the small beer poured before he asked for it. Turn right and he wasn't going to stop, he would drive until the tank he'd filled yesterday ran out.

There was a crump and the sound of many horns up ahead. The fifth car in front had tried to force its way on to the roundabout, with predictable results. It was time to light a cigarette and wait for the Guardia to arrive and sort out the mess on the glorieta. He took a coin out of his pocket, one euro. Enough to buy a small beer at the Gitana's place. Perhaps he'd toss it to decide. What was that book? The Dice Man, yeah. Poking out of every American tourist's pocket on the streets of Amsterdam over 40 years ago. Gerrit had been given it by a girlfriend. She'd died. Fell off a boat in Monaco. How's that for chance and probability? Anke had been a real manwijf at 20, Gerrit couldn't imagine how such an ugly girl would end up on a rich man's yacht in the first place. Well, she'd never seen 30, much less 65. And 65 wasn't so great, was it? He'd have to get out of the car in a minute. Stretch off his hip. No good driving a long way if you set off in pain in the first place. On the other hand, he didn't want to limp into the gypsy's bar. She didn't look bad for 50 and – well you never knew, did you?

Gerrit got out of the car, leaned against the roof, keeping an old t-shirt from the glove compartment between him and the metal. The traffic snaked backwards as far as the eye could see. People had blocked the opposing lane by attempting to turn round. It wasn't a successful tactic. The road just wasn't wide enough and now more Guardia Civil vehicles had arrived. They wouldn't be able to reach the roundabout, so others would have to come from Coìn. Or maybe Cartama. Left or right, again. There were a lot of people out of their cars now. Most were on mobile phones, reading e-mails, whatsapp-ing, some of them were even making calls. Gerrit's phone was at the bottom of the pool back at the house.

Down at the roundabout, two Guardia vehicles had arrived. The sargento was looking up the hill, at the traffic, at the fuck-ups who'd blocked the opposite lane. He spoke into his radio. Gerrit looked up the hill too. Another Guardia was speaking into his own radio. Gerrit saw this man start to walk down the hill. Gerrit got in his car. Always best to steer clear of the Guardia. Always. He wound the window up, but the policeman knocked on it anyway.

'¿A donde vas? ¿A la izquierda, o la derecha?' The policeman pointed towards the roundabout.

'I'm not sure,' Gerrit shrugged.

'How come?' Five minutes? With that mess down there?

'It's the mayor's daughter who's blocked the roundabout down there. Everything's being diverted past the RTA in town that's caused the whole cock-up.'

Gerrit watched the policeman walk down to his colleagues who were lifting the Smart car to the centre of the roundabout. Traffic moved off the circle onto Gerrit's right turn. The car in front started up. He fired up his own engine. Yeah, kind of the policeman to let him know, he supposed. Drive 'til it ended, then. Gerrit flicked on the indicator. No-one else bothered.

There we are then, until next time.