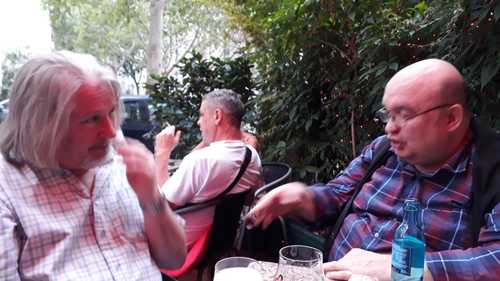 Here is a free short story.

As you may know I recently made a trip to Berlin. We had a great time reliving our youth, met up with some old friends, encountered new and interesting people and I stored up  source material for writing. That's what travel is for, isn't it? Anyway, in case any of you haven't seen this elsewhere on-line, I wrote this yesterday and as I said on the site where I posted it, "Some of this is true".  It's quite long, maybe you won't finish it, but I hope you do.

Though I was praying he wouldn’t, the fat, drunk guy sat down next to me. Four tables on about 5 square metres of pavement outside the kneipe and a guy with a waistline that dwarfed the circumference of the table tops stumbled into a chair opposite me. I saved my beer and my wife’s too. The other guy at the table wasn’t so lucky. There was a bottle of something blue in the behemoth’s hand. I thought it was an alcopop, but it was just funny-coloured spring water. Every other person on the “terasse” wished him “Good Evening” in the way that Berliners would even if your trousers were round your ankles and you had been sick in them.

Dreizehn was in Schöneburg, on the corner of Fuggerstrasse. It might have been named after the number in its address on Welzerstrasse, but it wasn’t. Being in Schöneburg it catered for a specific clientele. It was cheap and it was open. Besides, all the joints, in all the towns, in all the world can’t afford to turn paying customers away. Not nowadays. There was no-one under 40 there. When we’d arrived there were smiles of welcome. Berlin has always been a live-and-let-live kind of place.

I went inside to order more drinks, Vince and Andy were on the music system. No doubt Jimmy would be on later whether in Bronski Beat or The Communards. The barman was in lederhosen. Yep, just lederhosen, nothing else. Still, it had been a hot day. I paid for the drinks and left a 2 euro tip. Well the drinks were cheap, as I said. I took the drinks outside.

The big man started singing. Everybody laughed. The songs, or the brief excerpts from songs, were all rude. The other guy at our table asked him to sing the DDR’s national anthem. He didn’t think it was funny. Both guys referred to themselves as Ossies, and they didn’t mean Australians. The slim guy at our table had fled the East in 1986, illegally.

‘I wish I had waited 3 years, until the wall fell down. It was hard in West Berlin for illegals in that time. Also, Bowie had gone by then.’

The big fellow had actually been quiet for a bit. I’d thought he’d fallen asleep. We all jumped when he shouted,

Well, of course, we didn’t, but I knew we were about to find out, and probably at some length. Anyway, this is more or less what he said, minus some of the digressions, repetition and pointing of fingers.

‘I was a career soldier, you know. In the NVA, the Nationale Volksarmee. A career soldier. I did not work on the border, nein, never on the border. I trained the conscripts. So you know, I was a professional soldier. And now I drive a bus. A fucking bus.’

He took a sip out the bottle, dainty in the way some really obese men are.

‘On April 25th, we got on two buses, me, a gefreiter or two and 100 conscripts. I asked the Leutnant where we were going. He said it was top secret. But it wasn’t long before we saw the signposts pointing towards the Polish border. Soon we were in Frankfurt, our Frankfurt, on the Oder river. The buses parked outside the Grenzbahhnof, the Border Railway Station. The Leutnant told me to line all the men up for inspection and a few words. He was a short man. Always in dress uniform, never in fatigues or battledress. Perhaps he knew how he’d look in them. Doubtless he was unhappy at the dust on his shoes as he stood outside the Railway Station. I brought the men to attention. The Leutnant walked along the first rank, picked a bit of lint from the shoulder of one man, asked another when he’d last shaved. I could see his heart wasn’t in it. He stalked off, stood on the steps leading into the station and told me to stand the men at ease. I was expecting a long speech. Like most officers he liked the sound of his own voice. This time he didn’t speak for any longer than it took to tell us our mission was most important, for the safety and security of the Deutsche Demokratische Republic and that we must never tell anyone about it. He gave a salute, and walked off. I stood the men to attention just in time to give him a salute. I was about to march the men around for something to do,when the Leutnant bellowed “Sergeant Fuchs!”

‘He was standing to the rear of one of the buses smoking an American cigarette. They smelled different. The officers could always get contraband. He blew out a long plume of smoke.,

“Take them to the far end of the building Sergeant, you are looking for the shunting yard”.

‘ So that was what I did. Some uniformed railway employee was waiting for us. There were dozens of trains, passenger and freight. Cyrillic writing on some of them. Every line was full. The man was standing in front of a huge bowser, marked for hazardous chemicals. 3 or 4 hoses were attached to the outpipes,There were around a 100 stiff brushes leaning against a wall, in serried ranks like the soldiers who were to use them.

‘”Clean them,” the Railway man said, pointing at the rolling stock. “Clean them all.” Then he handed me a large sack, full of paper masks, like the Japanese wear in their polluted cities.

‘So we hosed and scrubbed all day and half of the night. I counted 48 trains. Then they started to move them out. When the last one had gone, the lines began to fill again. But I knocked the men off. We hadn’t even eaten. I hunted for the Leutnant, but he was nowhere to be found. After I grabbed the Railway Official by the throat, he agreed to bring some food out from the official canteen. I told him there had better be some beer or I’d tear his arms off and feed him the soggy ends. We got some soup and some very hard bread. Then we slept on the buses. It was like that for four days. By the time we’d finished the rumours about Chernobyl were everywhere. When the last train pulled out the Leutnant finally appeared in his pressed uniform and shiny shoes. “Let’s go, Sergeant,” he said.

‘Like most people I slept all the way back to the barracks in the bus. Of course it was the same rigmarole when we arrived. Parade the men, a cursory inspection and a few words from the Leutnant. When he finished I gave the command “Officer on Parade, dismiss”. The men executed slovenly salutes followed by worse quarter turns and fell out. The Leutnant leaned back to look up at me, “Well done, Sergeant,” he said.

‘Four years later the Peoples’s Army was disbanded, just like that. Minute pensions, tens of thousands of career soldiers on the streets. I heard the Leutnant died of cancer, guess avoiding the trains didn’t help.’

The fat man seemed sober now. A seat became free at the table alongside, and he took it. I took a long sip of beer. It was good beer, too.

Hey, thanks for reading.