April is the Coolest Month...

Well next April is, as that is the provisional publication date (subject to rewrite requests and other unforeseen delays) for your next encounter with Moffat.

In the meantime here is a short story written in 2011. Spanish-based with a link to a great song at the end. 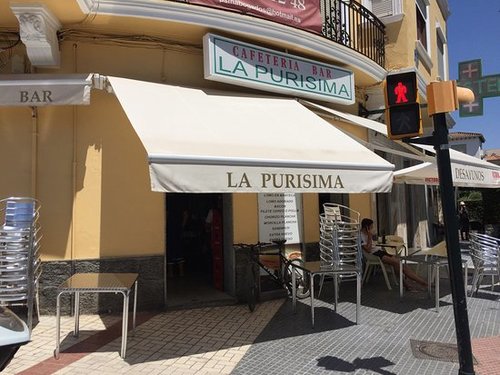 [This image is from the cafe's website and they don't mind. I asked them]

Guy blew out air between his lips. Who had done that at school? Glasses with thick black rims and very red cheeks. What was his name? Definitely something non-PC, avant-la-lettre as it were. They - no, make that we, he thought - had made what's-his-name's life a misery. Childish jibes about windscreen wipers on the inside of his glasses. Didn't even make sense, when you thought about it. Wonder what he ended up doing? Pharmacist or something, wasn't that what his dad had done? Guy looked out over the water. The Med was grey aside from the off-white of the breakers. He'd been counting them for a while. Just to see. Whether the seventh wave was bigger, that was. He'd given up when he'd realised : you could tell yourself it was, or you could say you couldn't have known which wave was number one. Still, it was never the eighth.

The waiter brought a creased menu and a saucer of olives. Guy gave half a grin in return. The man, boy really, shrugged at the Guiri out on the terrace in the miserable weather. Guiri – Guy, Guy the Guiri. It was almost worth a smile, Guy thought. The menu wasn't extensive, the names of the dishes looked interesting enough. La Paloma served imported Argentine beef. Guy came because it was a stone's throw from the sea-shore, on Pedregalejo beach's Paseo Maritimo. The boy came back, notepad and cheap biro ready.

'Just coffee.' Guy tossed the menu onto the table, barely missing a pool of rainwater

The waiter clicked his heels and Guy thought about uniforms, parades and Berlin. He tapped a Ducados out of his crumpled packet. The first deep draw was always the best, that and blowing smoke out of both nostrils, like Smaug on his pile of jewels.

Benny. That had been it. Nothing too bad at all. Benny, after Benny the Ball in Top Cat. Benny the Ball who was never, never in his life, on it. It was funny where your mind went. Hopscotching the past, picking up the pebble from wherever it fell. Benny to Berlin, wherever next? Guy glanced out to sea again, his eye caught by the lone kite-surfer over the grey water. He jerked in the wind like a marionette in the hands of a child or a drunk. Guy wondered if he was any good, how could you tell, on a day like today? Further out there was a fishing smack. Just one, rising and falling with the waves; waves well beyond the rocky perimeter of the bay.

Guy took his wallet out, laid it on the table beside his coffee. The leather was cracked and creased, the black faded to a dark grey. It had been a gift. Wallet open, he checked the notes. Forty euros in fives. A drug dealer's float. He laid the mobile on the table beside the coffee and the wallet.

An old man in a hat shuffled past on the boards of the Paseo Maritimo, weathered stick tap-tapping at the wood. When Guy had first come to the Costa, he couldn't believe how many of the older Spaniards still wore hats. Panamas, Trilbies, Hombergs and Fedoras: all worn by men between sixty and a hundred, smoking on street corners, eyes-slitted, unfashionable trousers flapping in the wind. Guy looked down at the old man's legs as he passed out of view, the trousers doing the wind justice and more.

His coffee was cold. The price of taking it on the terrace in such weather. Guy drained the cup. He opened the wallet again, took out a photograph. A smiling face; short, short hair and the uniform. He laughed. The one day he'd ever looked smart in Air Force blue. The photo he tucked under the saucer, dropping the wallet beside it. Rainwater from the pool on the table top splashed onto the white border of the picture. Guy stood up. Benny, Berlin, Be Bop Deluxe. Hopscotch: but nothing is chance, not really. Walking towards the Paseo Maritimo, he started humming: New Precision.... great song... he thought, especially the refrain at the end.

the information about this track is wrong: it's from Drastic Plastic in 1978, so I imagine it's a bootlegged live version from the US, somewhere around that time. Contact Youtube, if this is problematic.