Another Guest Contribution from Please Allow Me Inc.

As some of you may know, Please Allow Me Inc. are the entirely fictitious and fictive company charged with the marketing of Gibbous House and all things Moffat-y. Although their talents will not be brought fully to bear on the sequel until the crowd-funding target has been achieved (3% to go as I write this), we can look forward to still more nonsense from PAM Inc.

Headquartered in the cultural and marketing hive that is Cricklewood, PAM Inc.'s motto is "Never Knowingly Oversold" This sideways-looking company are the p̶e̶r̶p̶e̶t̶r̶a̶t̶o̶r̶s̶ creators of the Fakevertising™ concept which is almost as convincing an innovation as "Fake News".

Anyway, to give a flavour of the sterling (though of dubious hallmark) work that PAM Inc. does, here is their Social Media post regarding my trip to Manchester to sell a few books. Some facts are even true... 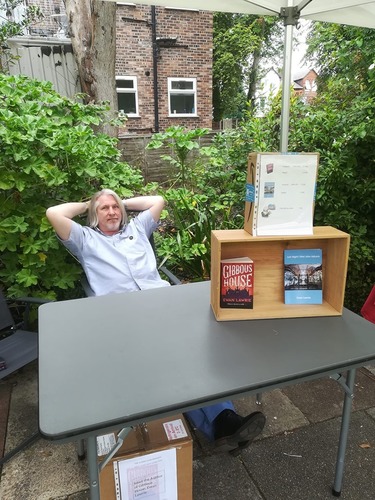 [Photograph taken by a passing stranger, who at least bought a book]
Humboldt has returned with his report on The Gibbous House Man's activities at The Albert Club Summer Fête in West Didsbury on Sunday. We here at Please Allow Me inc. were sure that it could only be the infamous Fête Worse Than Death. Imagine our surprise when Humboldt (did you spot him? We told you he was a master of disguise) opined on his return that all in all the whole day was quite a success.
The Gibbous House Man sold 8 books! Eight! Despite our hopes it failed to rain and Humboldt said that the GH man's rather amateurish stall was next to the Cake Stand!

Anyway here is a picture which Humboldt managed to snap of The Gibbous House Man giving the great and good of Didsbury the hard sell. Although where Humboldt concealed the camera, we are sure we don't know. Ah! You didn't spot him?

He came last in the Dog Show.

97%. Not much to go, I'll see if I can persuade Unbound to give me a nudge towards the total, nothing ventured.