Absolutely No News At All (and some free fiction).

No. No news. That's good news, right? Gibbous House ended up with a publication date of January 2017. I received final proofs in August. It may well be that No Good Deed final proofs arrive this month. Pledgers started receiving their books in December. Let's cross our fingers and hope for the same outcome this time. 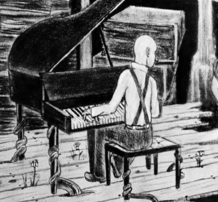 'Call me Stan, it's close enough.'

He threw the line away, like a night-club comic. I noticed his smile. It would have made a Cheshire Cat proud. If I think back, that smile is all I do remember. He didn't seem unduly tall, or short, come to that. His accent fell firmly between the Pale and the promised land of the United States. I couldn't take my eyes off him, but he was as slippery as a decal; he might have had a hare-lip or a third eye, but he had the art of being unmemorable - at least as far as looks went.

The smoke curled around us. Cigarette ends glowed in the half-light of the juke joint. Someone played stride piano on a beer-ringed upright. The joint had asphalt out front that was covered in pick-up trucks and the stains from Saturday night fights or fucks. I'd blown in on a eight-wheeler full of string beans out of Gospel across the state-line in Utah. The driver had dropped me –engine running- on the outskirts of Testament, spooked at the sight of the state troopers smoking by the highway.

Stan said he didn't mind if he had whatever I was having and I said I was having another so he laughed. I was still racing from the trucker's benzedrine. We took a beer each that the barkeep slid along the bartop. They stopped half-way to us, slopping suds on the polished wood, and I thought that the West wasn't like they showed in the movies.

He picked up his beer, blew a few more suds off the top and his breath turned to steam, though it wasn't cold in the bar. The rollocking, roundhouse, barrelhouse piano stopped when the beefy guy fell off the piano stool. Stan flicked his eyes over to the tired instrument, and said, 'Listen, brother, to all of the best tunes.'

I saw Blind George later that year in Harlem and it put me in mind of what Stan did with those keys that night. Stan was the Bird of the keyboard, as white as those natural notes and as black inside as the sharps and flats. He was possessed by something, the bop, the blues or the breaking hearts of all of us who were listening on a cold October night just a stone's throw into Colorado from Utah. A swell-hipped woman sat next to me at the bar and told me he was playing her life with all the no-good, never-weres and never-would-bes who'd promised her the moon and given her a dime. I tried to kiss her but it was no dice. She'd have kissed Stan if he'd been uglier than a hog, I knew that.

When he stopped I felt punch-drunk, shocked that the beautiful chords, dischords and chaos had gone just like that. I tried to grab his jacket as he passed, but he slipped away like smoke and his laugh echoed around the bar or in my head long after he'd gone.

"There We Are Then"