A Promise Made Is A Promise Kept.

STILL no news for you, I'm afraid. However, here is a piece of short-fiction. It's about how this particular aspect of, well, developments of the last few years might turn out, we still don't know, although I thought we would by now. 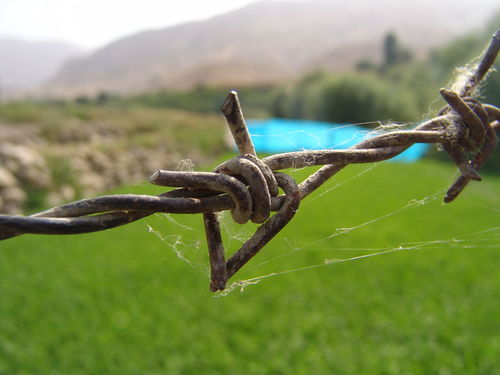 [The photo is used under licence CC BY SA 3.0, was sourced at wikipedia.org and was taken by

“Meh-the Ta-rah?” he says. “What do you see? It might mean “what are you looking at?” I'm not sure. I know some Fuss-ha, book Arabic, Pan-Arabic, whatever you like to call it. I don’t know the Tikrit tongue, the Al-Awja argot, or any of that stuff they speak outside of central Baghdad or in the investment banks of every capital city in the world. The Army taught me this, although I never had much use for it in Basra or Fallujah.

“Anah ah-rah walad” I see a boy, I say. Whether I see him or I’m looking at him, I don’t care. What I don’t see is a gun or the tell-tale bulk under a puffa-jacket. The skin on his face is smooth, between what we used to call bum-fluff when I was his age, or near it. Of course, I don’t know how old he is. His papers say he is sixteen. We have been told to make sure – as sure as we can – that all males are minors. These same papers say he is an Iraqi citizen, born in a Sunni Arab region near the Syrian border.

This means a dilemma. For him, and for me. If the papers are genuine then political asylum is an unlikely prospect for him. It’s doubtful someone his age has even been to Baghdad, much less upset anyone there. Besides, we are already expecting the next foreign-policy initiated disaster, wherever that might occur.

And if his papers are fake? We will assume all the details are fake and he will be treated as an applicant of majority age. This means he will be turned back. But not before we confiscate his papers, because we cannot permit forged papers to remain in circulation. And then my friend will be the Union’s problem.

How do they get so far? As far as this bridge over a river. This river with a fence along one bank as far as the eye can see. I wonder if the green still surprises them. There’ll have been plenty of rain on the way, plenty of green, between the high-rise slums and cousins’ hospitality.

He is looking me in the eye. Not pleading, not defiant. Just… maybe memorising my face.

I have been stationed at Border Force Station Belleek, in Fermanagh, for six months. Everyone calls it Puckoon Station, even the young kids who have no idea who Spike Milligan was.

He knows I think. Knows I’m going to turn him away. I hope he’s not a fence-runner. As long as there have been borders and concentration camps and armed border guards, there have been fence-runners. They just go mad and run at the boundary or border or the Berlin Wall, as if they’re going to develop super powers and jump over it.

I confiscate his papers, send him back to the Eire side, into the Union - and wait for the sound of gunfire.

P.S. I was in the R.A.F. and never went anywhere remotely dangerous, except a few places in Berlin, Hamburg, Paris, Budapest, Prague and Cyprus: everything that happened in those was entirely my own fault. Even so, the most dangerous environment of all was the aircraft that I flew in towards the end.