Just 13 days to go. Midnight 6th September and the list closes for people to get their names in the front or back of No Good Deed and to prove one or more of the following things:

Despite the BBC's news item this morning, the number of full-stops in this post is no reflection of my state of mind. A full stop means the end of a sentence. Here is a quote from a well-known academic:

"If everything means what you choose it to mean, nothing means anything." Shadrach Ecclesthorpe. Chair of Philosophy, Heckaslike University, 1980-2012.

I wrote this shortly after Grenfell, when I still lived in Spain. Some of it is true. 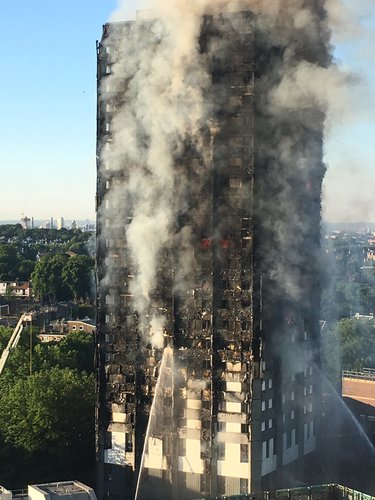 “A fridge started it. They say”.

Who's they? I think but don't say.

“Yeah, one of the residents said his fridge blew up.”

The bar-room philosopher and the barrack-room lawyer are bigots under the tattoo-ed skin.

Subtexts abound. I can see them in the clockwork whirling behind my fellow drinkers' eyes. "What kind of fridge? Bet it wasn't a Smeg." "Might have been an incense stick fell on a cheap nylon carpet."

All those assumptions, as if it matters. As if any of that matters at all. People died. I want to scream it in their faces, but I know that whatever comes out of their mouths, the cogs will grind out, “so what? Only foreigners.” As if we are any less foreign here.

We too fear fire, here in our paradise that is as hot as hell every summer. Our fires start outside; a careless fag-end, fly-tipped glassware rolling onto dried grass - or simple greed converting arable land into land fit only for “development”. Still, someone – or something – to blame. Besides, these fires of ours spread horizontally, we could run all the way to the Costa, if we had to. Imagine that, that other fire of London, travelling vertically: upwards to your down. No escape. I read someone jumped.

Imagine that too, thinking “jump or die”, even though you know it's “and” not “or”.

'Vinny knew one of them.'

Vinny No-Nose lives out Cartama way in a caravan. He's been in trouble with the police. He got his nickname after a fight outside a girly bar just off the new motorway. I find it hard to believe that he did know any of the tenants of the tower.

'Says who? Vinny?' I'm drawn into the conversation again. I should have foregone the second beer.

'Yeah, he did some work on that tower. A while back. He said he was knocking off a … you know, one of…'

All I can think of his how desperate someone must be to have taken Vinny No-Nose's money.

'Going to be an enquiry, they say.'

I take a long swallow. They. How many kinds of they are there? Immigrant they, government they, other they. Anyone who isn't us, or maybe, isn't me?

And so what if there is an enquiry? We'll (they'll?) look for someone to blame, and people will bend the truth, lose some paper, crash a hard-disk and try to hide anything that connects them to any decision on cladding and budgetary concerns. The Builders will blame the Town Planners and they'll blame the budget office at the council and the council will blame funding cuts and then we'll all blame the government, this government or the ones before depending on which colour your hypothetical rosette might be. And all the money spent on an enquiry to find out who is easiest to blame with the least inconvenience to everybody apart from the lost, the bereaved and the outraged? Why spend that on the victims? Except, look and listen carefully carefully, the word victims will be sparingly used, because that implies a crime.

And I do what I always do in these situations.