The Burglary (or the time half my art was stolen)

Week four just about over, and the campaign’s hit 55 supporters – thank you everyone who’s pledged to the project, it means more to me than I can say. This will most likely be the last update before 2019 – so happiest of holidays everyone, hope the New Year is a good one.

For this update, I wanted to tell a story, a true one.

Back around 2006 we – Anna and I – were living in York. This was several years before we married. I was working as a phone jockey, yoked day to day under a Britney mic, calling people to ask them to translate their opinions on various matters of little importance through a scale of 1 through 5. Anna was temping for BT, handling fault claims – of which, BT being BT, there were many. The house we lived in was shared with three friends, all of them from the North East, all utterly barmy and endlessly frustrating and, for the most part, damn good fun.

Of course by now I was working on The Boy with Nails for Eyes. At this point the project wasn’t yet a graphic novel/comic in the true sense, but rather an illustrated prose story. Gradually, with each redraft, the story was creeping away from words towards images. This was something to which I was resistant. I knew, having published a few short strips in small-press British zines, how much work comics are. Still, the pull was irresistable. I began to combine digital and physical media, things I previously kept separate, resulting in a growing set of images, each representing many hours of work, along with the text. I was on the road to defining the final look and feel of the story. I felt I was getting somewhere. 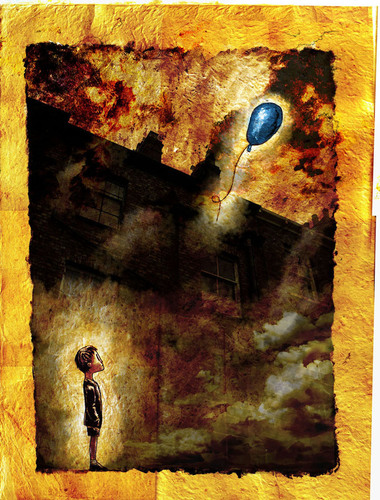 All this was done on a creaky old PC in bad need of updating, perhaps even an exorcism. The worst problem was the hard drive, which was tiny. I had lived through one past computer meltdown and didn’t relish the idea of losing everything again, given the increasing stakes. So I took to storing all my artwork on an external hard drive. This still wasn’t ideal. Around seven years’ worth of writing and art – all stored in just one place. All it would take was a bad roll of the dice and – foom. So, I ordered a new internal hard drive, and made ready to copy everything across to that, so I could relegate the external to back-up status. I congratulated myself – most sensible and grown-up.

It just so happened that at this time my parents were visiting (they live overseas and we don’t see them often). They had rented a small flat nearby, and Anna and I went over for dinner. Great to see them – there was eating, drinking, talking. But it was a school night, so before too long we had to head home. It was a short walk, no more than a few minutes. When we got back there was no one else home – the house was dark.

I’d like to say that we knew something was wrong the moment we went into the house; the power of hindsight. Sometimes its enough to make you believe in greater perceptive abilities than you in fact have. But no, as we came in I don’t recall having any misgivings. Those came as we got upstairs.

Our room was at the front of the house. It had two big, single-glazed sash windows, they made the room gruesomely cold in the autumn. When we came into the room, the air seemed even colder than usual. We realised one of the sashes was wide open, like a jaw slack with astonishment. My first thought was how foolish we’d been to leave the window open when we went out. But then we saw the drawers spilled open, our clothes spewing out onto the floor, our books in disarray.

A check downstairs, panic mounting, confirmed it. The key had been left in the back door, and the dead-bolt left unsecured. A smashed pane of glass next to the door handle – the rest, well, it was so obvious you could practically draw it in the air. 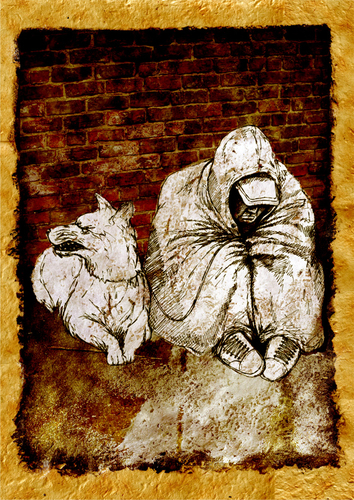 I don’t remember who called the police. I do remember sitting with the two officers who turned up, in the living room, which was a mess of beer bottles and young-adult detritus. The officers – in bulky black clothing, stab vests, torches on their shoulders like one-bug-eyed familiars, hung with all the accoutrements of their work – seemed too big in the small room. (By contrast, making the discovery in our room upstairs had made the room seem too big, like the presence of strangers had pushed the walls back, revealed an alien nature beneath its skin. A place we had tricked ourselves into thinking we'd occupied; merely inhabited.) The coffee table had a large cage on it, which housed the household pet, Jefferson, a white rat of malevolent disposition (who would not long after receive a botched Viking funeral on the River Ouse). The mess, the rat, simply added embarrassment to our distress. Nevertheless the police were sympathetic – but they left us in no doubt that the chances of retrieving what had been taken was basically none.

Of course, my external hard drive was gone. I saw that almost straight off. Probably they had grabbed it on the way out – an expensive-looking (but actually, secondhand, near-worthless) piece of computer kit, handily pocketable. The USB cables that would have made the thing any actual use to the thieves had been left orphaned. Next to it lay the new internal hard drive. I had been preparing to transfer and back-up my files that very weekend. The whole tableau was like a physical imprecation – never put off till tomorrow...

All my work was gone. Our belongings, our clothes, had been rifled through by strangers. But I can see how we were actually lucky. We realised later on that we would probably have noticed the open window from outside, so it must have been closed as we approached the house. And of course, why would an intruder leave via a front window, when there’s already a well-secluded back door available, the same by which they came in? We must have disturbed them in the act, and they dropped out of the window as we came in, chatting and oblivious. That, in retrospect, was fortunate. Also, in material terms, we’d lost relatively little. But I was heartbroken. We both were. I don’t remember any outbursts, or dramatics like that, just a feeling of cloudy numbness spiked with flashes of intense disbelieving anger. My work was gone.

The next day I got up and went round all the second-hand shops in the city that I could find. Knock-off shops, open-air stalls. I looked for anything I could recognise of ours, anything. Of course, I had no success – it was a farcical idea. But still I had to try.

Maybe a couple of days after that, I accepted that it was all gone for good. So now I had a choice. all the images for The Boy with Nails for Eyes were gone (along with dozens of others in no way related to the story). So were all the digital versions of the text. All I had left were hard copies in varying states of obsolescence. I could start again, or abandon it. 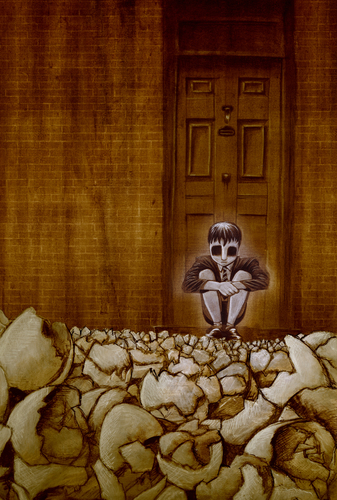 It’s hard to get across the centrality of the story to my life back then. Unlike now, I had no other serious creative projects to provide an outlet. I tied my day-to-day happiness to the ups and downs of the project to an extent that was, looking back, unhealthy. This meant that the choice was between either a task that seemed insurmountable – in essence, starting over – or giving up on one of my life’s key support structures.

In the end, given that, it wasn’t an actual decision, so much as going along with the inertia. I began again. I gathered what I could from my computer’s hard drive. This amounted to a single image I had set as my desktop background. I downloaded a few other images from online galleries where I’d posted them – all of them low-resolution and hence, ultimately, useless (it’s these that illustrate this update). I identified what I thought to be the most recent copy of the text, a dog-eared bundle of paper covered in scratchy pen. I began transcribing. Through it all Anna was, as ever, closely involved, an unwaveringly pillar of support – with her guidance I resolved, gradually, to make the process useful. I edited, I questioned the choices I had previously thought set. I discarded, trimmed, re-worked.

A year or so later we moved to Bristol. There, in our cold, damp, wintry basement flat, I drew the first page of the book in its current form – the pages below. Once I’d finished them, alone in the flat, I leaned back and said to myself, ’Bugger.’ Because that page worked – I knew, in fact, that this was the moment that I’d finally arrived at the approach the story needed. The idea of producing a graphic novel was now unavoidable – and all the hard work that entailed. 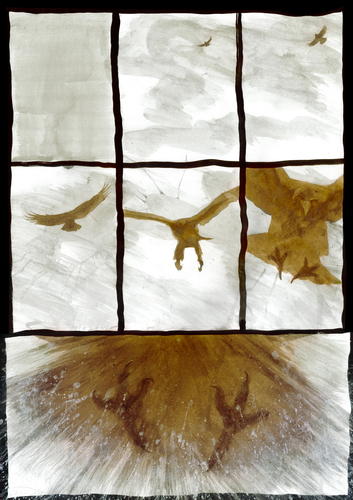 A decade later, here it is.

I’m not glad that the burglary happened. It’s an upsetting and an aggravating thought, to know your stuff, your partner’s stuff, your clothing, had been gone through by strange hands. I’m still angry for the violation. Nor do I congratulate myself for the decision to start over, because it wasn’t a decision – as said, there was too much inertia for that. But some good came out of it. I don’t think I would have eventually made the decision to go down the graphic novel route had the burglary not happened, and that was the right decision for the story. To that very limited extent being burgled, losing all my artwork, was a strange stroke of fortune, and I’m glad of it.

Things I've been listening to lately

PJ Harvey - White Chalk. Anna introduced me to PJ Harvey soon after we met, which has been completely my gain. White Chalk isn't my favourite Harvey album; that would be a coin-throw between To Bring You My Love and Let England Shake (the lyrics of the title track stunned me when I heard them, not least for their parallels with The Boy...: "Smile, smile Bobby, with your lovely mouth. Pack up your troubles, let's head out to the fountain of death and splash about"). But White Chalk has a eerie quality all of its own.

Hans Abrahamsen - let me tell you. This song cycle sets to music the novel of the same name by Paul Griffiths, which tells the story of Hamlet's Ophelia, using only words uttered by her in the play. Again, it's a very eerie experience, and the first blooms of the horns in the opening song give me the chills (plus Barbara Hannigan is utterly awesome).

Max Richter - Sleep. I've been having a little trouble with sleep lately. It happens every now and again - waking up in the night, feeling the brain suddenly kick into gear, and you can feel sleep spread it wings and lift. Richter's long lullaby has been the ideal company – soothing, but melancholy. Not trying to force you out of a mood, but carrying you gently along with it.