[Spoilers for volume 2 below. All the events shown will take place early in the story, so they're not major spoilers. I'm not a spoiler-averse person myself, as a rule, so I'm never too fussed - but if you want to read the next volume of The Boy with Nails for Eyes completely fresh, then read no further.]

Recently I've been carrying on with preparations for the next volume of The Boy with Nails for Eyes. The main character in this volume is Mary. Here she is in her room. 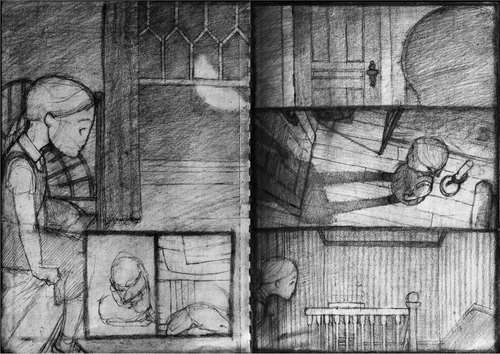 Mary's story begins one night when she sneaks out of her home to rescue her teddy bear, Poppet. She has to sneak past her father, who's sconced, as ever, in his chair, rapt in his work. 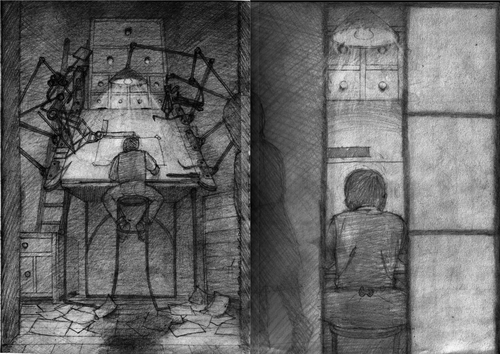 Mary lost Poppet because of a Storker attack. She and Poppet were playing outside, near the Bunker at the centre of town, when the Storkers appeared. In the rush to escape, Mary left Poppet behind - now she is setting out to bring him back. 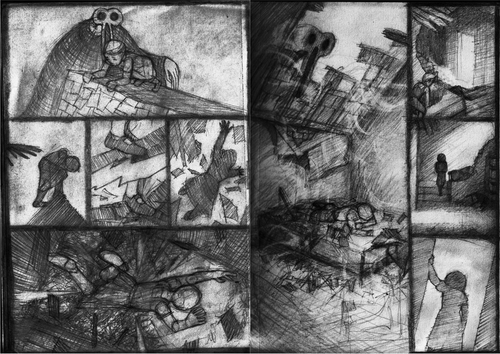 The above drawings are taken from my sketchbook, where I'm preparing a detailed rough version of the next part of The Boy.... The idea is to identify any problems or, indeed, opportunities, ahead of time.

One thing I worried about doing this (planning hasn't been my strong suit in the past) has been locking down all opportunities for executing things in the moment, for improvising. I'm trying to balance this out by leaving deliberate blanks.

In the second image above, for instance, I've left three panels empty - I have a very good idea of what I'll put there, but I want to leave this until I come to it, in order to make sure what goes there is arrived at in the moment.

The rough and ready, grungey look of these pages is something I like more than expected - I may have a go at preparing an entire comic this way some time.

All for now - cheers all