The campaign recently reached 85 backers, just shy of a quarter funded! As ever thank you everyone for your pledges. If you like the project, please consider showing it with a friend, or posting something online – the more people see the book and back it, the sooner it'll be gracing your shelf.

Chief among my activities of late has been preparing animations for a live reading. Another segment has been finished, and I've used that to form the basis of a new trailer (follow the link to watch on Vimeo).

But this isn't all I'm doing. Recently I've been planning the second volume of The Boy with Nails for Eyes. This is a new experience for me.

Planning, I mean. I've never been much of a planner. My approach has generally been to sketch a rough idea, get excited about it, and jump straight to the execution. This is an approach that has often left me in self-sabotaging in a Wile E. Coyote fashion.

(At times almost literally. When I was a kid I built a den in the back garden, a sprawling edifice complete with booby traps, to deter all the deadly enemies every ten-year-olds has. One such trap was a wooden packing pallet, which I rigged up with some rope. I rigged it so that anyone coming through an especially inviting gap in the hedge would trip the rope, and the pallet, balanced on one edge beside the gap, would topple forward onto them. One day, I was standing on top of the hedge working on another part of the fortress. I finished up, and jumped neat as you like down on the outside of the hedge. At least, that was the plan. What actually happened was my shoelace got tangled in the hedge – I stopped in mid-air, pivoted elegantly through 180 degrees, and landed on the road. After a few moments of, let's say, quiet contemplation, I got up. I was a little stunned. I staggered back into the garden through the most immediate route – the inviting gap in the hedge. You can fill in the rest. At the very least, I told myself afterward, I could reassure myself on my engineering skills.)

So. Not one of nature's planners.

But as I've worked on the first volume of The Boy..., I've learned the hard way the value of planning. Much of my time working on the first volume was spent going back over work I'd already completed, because I realised I'd made a mistake, or missed an opportunity, or just plain got things wrong. I'd be too hard on myself if I said this was entirely because of my lack of planning – I basically taught myself how to create a graphic novel by creating one, and it's natural that I would make mistakes, lots of them, on the way. But I wasted time by not checking my intentions at an early stage in the process.

This time – after going back to the text outline, preparing a chapter breakdown, making notes, generating ideas, thumbnailing, revising, rearranging, scratching stuff out and scratching it back in again – I went out bought myself a notebook. This notebook was for volume 2, and nothing else. In it I would sketch a full outline of the story, beginning, naturally enough, with the Prologue.

So here they are – sketches of the opening of the next volume. 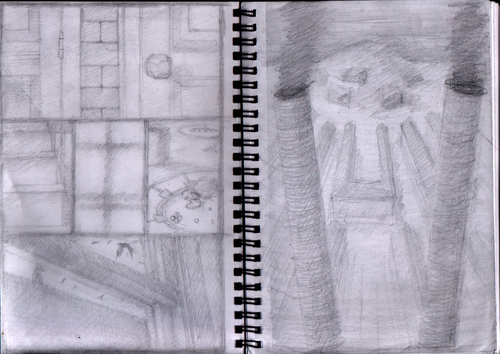 I've already started experimenting with words, getting the text laid out on the pages. Again, not something I've done before. (I'm going to do another update soon, for supporters only, showing some of the text as it falls into place.) 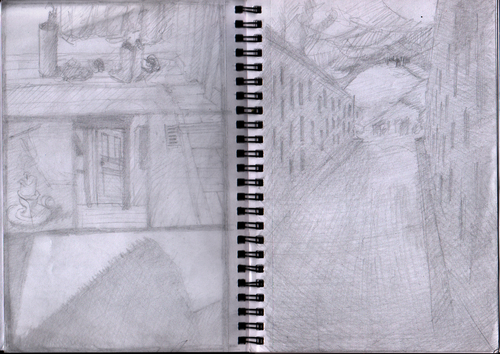 My aim is to have an entire rough version of the book complete. Only once that's done – and not before – will I start working on the pages proper. 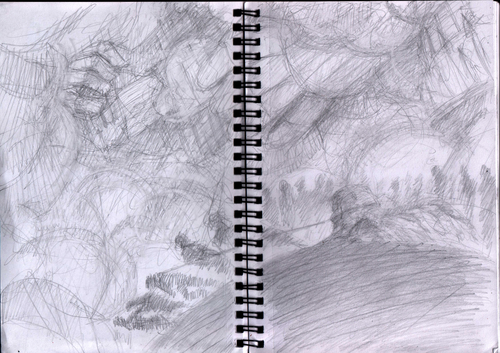 This sequence depects the townsfolk coming together to build the Bunker at the centre of the town. 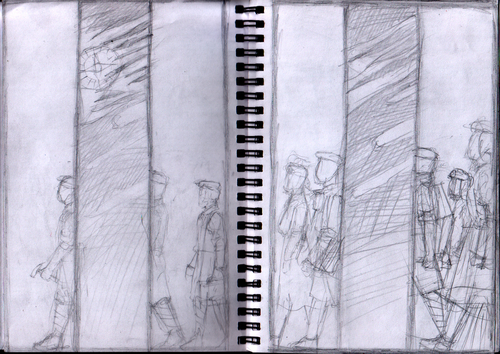 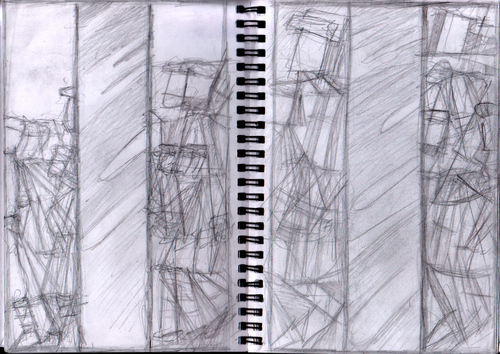 The War has become too much for them. 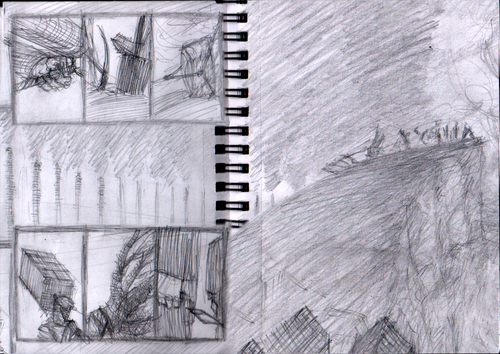 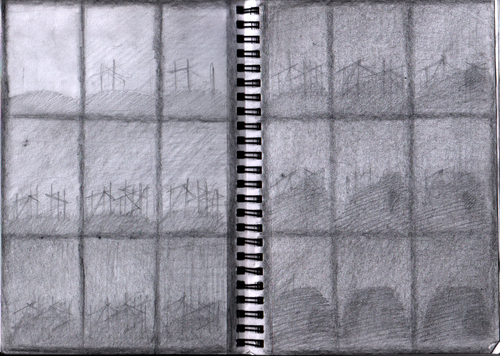 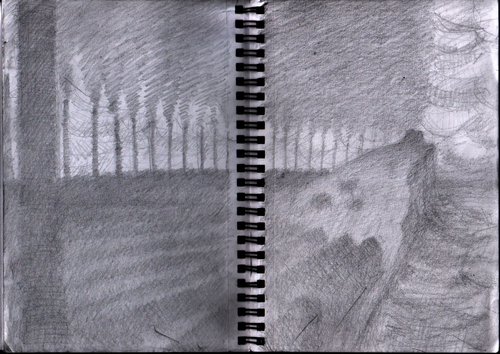 Not all the panels will be drawn using physical media – some of them will be entirely digital, either painted using Photoshop or collaging photographs or domain images. But sketching these digital elements in as well means I know how the whole page will hang together. In the past, this was something else I worried about too far down the line.

I find myself enjoying this process a lot more than I expected. It's really enjoyable to sketch without the pressure of arriving at something that is polished, with the chance to explore and develop ideas as far as they can go.

But I still can't pretend I'm a natural planner. If I was, I might've thought of the inescapable difficulties when you scan pages in a notebook that's ringbound.