Just a quick update to let you know there's an interview with me on Pipedream Comics about The Boy with Nails for Eyes. I discuss influences, inspirations for the story, some favourite artists and how the project found a home at Unbound. 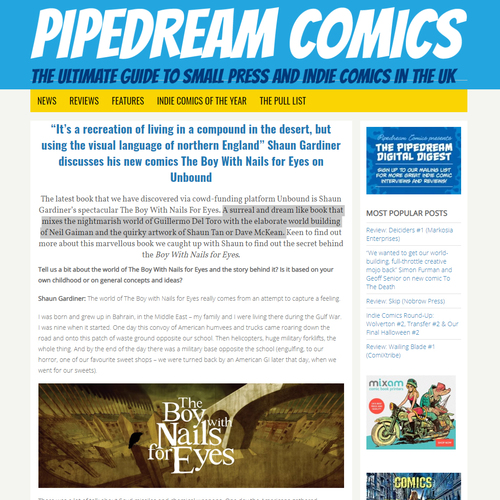 Here's how they describe the book:

A surreal and dream like book that mixes the nightmarish world of Guillermo Del Toro with the elaborate world building of Neil Gaiman and the quirky artwork of Shaun Tan or Dave McKean.

To read the interview, head on over to the Pipedream Comics website. I've included a few extracts below.

My experiences as a kid during the Gulf War:

The inspiration for The Boy with Nails for Eyes:

The world of The Boy with Nails for Eyes grew out of that paranoia, an attempt to try and imagine a fantastic world built on that feeling, the kind of life that would bring about.

I really want people to interpret the story in their own way, and not feel too bound to try to figure out what I was trying to say. I will say that I obsessed over pretty much every detail in the story – it all means something, if only to me.