Behind the Scenes: Procession

It's been a while since I've published an update - so I should start by saying hello to all the new supporters, great to have you here!

As ever, thank you to everyone who's supported the project so far! The very best thing you could do (beyond your much-appreciated pledge) is to show the project to people you think would like it. The more pledges, the sooner the book goes to print.

I've been working on plans for the next volume of the comic. The main character in this volume is Mary, whom you haven't met yet.

So I’ve been doing a lot of sketching and furious scribbling - some of which I'll be sharing in the near future. (Some posts will contain spoilers - I'm not hugely bothered about spoilers myself, but I'll try to remember to mark posts clearly, so you can avoid them if you want.)

But, focussing on the current volume - here's another short video showing the stages of an image from The Boy with Nails for Eyes. Below I go into a bit more detail about how the image was put together.

(Actually, it occurs to me that I'll be giving away a few details of what happens in the book below. I wouldn't call these spoilers, but if you really want to read the story cold, I suggest reading no further - or else, skimming over the images but ignoring the text.) 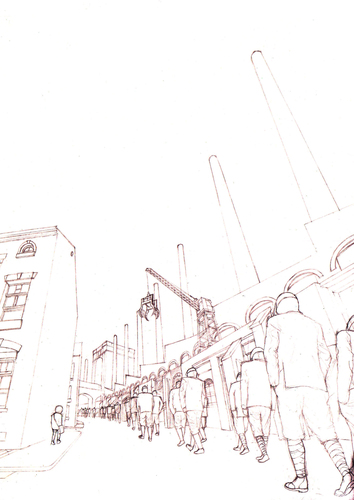 The image is from the opening of the chapter entitled 'The Labyrinth', with Bobby beginning his journey through the town.

The drawing was done using pencil on Bristol board, which is very smooth, very dense paper, lovely stuff.

(The above image has been tweaked in Photoshop - the original drawing was done using a very light pencil, so I've increased the contrast so the lines become visible. This has meant a few details, marked out very lightly, have been lost.) 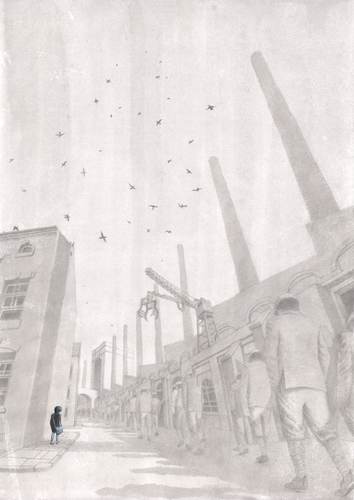 The pencils are inked - this is done in two stages.

In the first stage, the image is given tonality using inkwash - diluted Indian ink - so that the basic shapes are picked out. (This the the reason I use very light pencil to plan the drawing, so that the pencil lines disappear when the inkwash goes on.)

Using increasingly smaller brushes, I work in the detail, gradually moving on to use a combination of pencil, chalk, charcoal and sometimes acrylic paint, to refine things further.

Next comes Bobby himself. 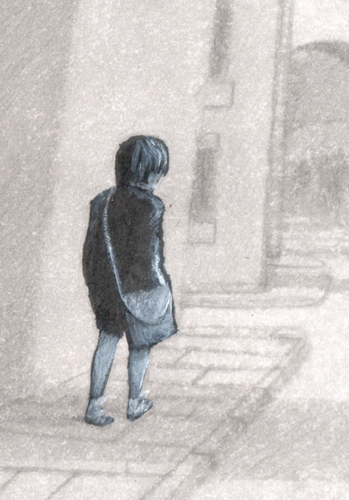 The first stage is block out Bobby's outline using raw Indian ink. This is always done slowly, using a very small brush - the slightest mistake here will be annoyingly time-costly to repair.

Once the ink's done, I paint onto that using white acrylic, to define the details of the figure. I do this first using something close to dry-brushing (which involves wiping most of the paint off the brush before applying it to the paper), so that a slight texture comes through the paint.

Smaller highlights are painted using a fine brush, then sometimes a white-ink pen for real detail.

Lastly, shading is applied using a variety of pencils.

The aim of using these two techniques is to create a contrast between Bobby and his world, so as to reinforce his sense of dislocation. This might have been simpler to do by drawing Bobby on a separate piece of paper, and then bringing him into the main image using Photoshop, but I wanted to be sure of the image hanging together even with the contrast. I wanted an image which wasn't itself disjointed, even while depicting disjointment. 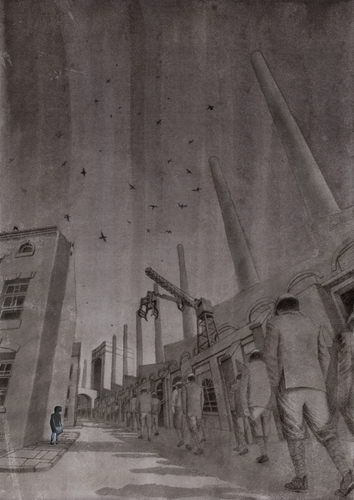 Here, my hope was to catch the viewer's eye by increasing the contrast of the largest figure on the right, then drawing the eye into the distance through the use of strong perspective in the chimney and marching men. This would lead to Bobby, the main character. (I knew that when I added the fog digitally, this would also mean the reader would experience the marchers gradually being swallowed up by the fog.)

The strong vertical shadow next to Bobby is then supposed to draw the eye up and into the sky, where we encounter the circling crows. 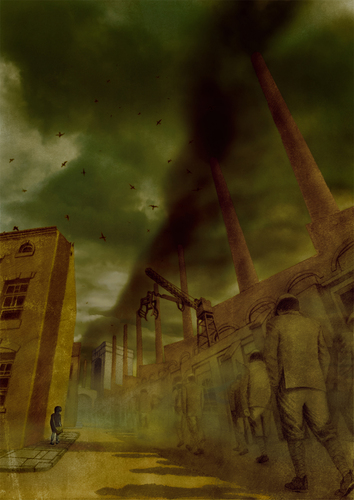 This final image captures a lot of stages in one.

First the colours are blocked in, with a sepia tone as a base. Then a variety of subtle reds and blues are added to bring out details.

The digital elements are added - in this case, this is limited to the sky and the smoke. The sky comes from my library of photos, cutting out and stitching together a cloudscape that is suitable to the image. The smoke is painted digitally.

The fog comes next. This is done first by digital painting, getting the shape and density correct. The tone of the fog itself comes from a scanned piece of paper which I saturated with several runs of inkwash, so as to give the fog texture and depth.

Finally, the levels of the whole image are tweaked again to help the elements hang together, and, as above, invite the eye across the picture in a way that works for the story.

So that's it - how this page was put together.

Next time, as said, I'm going to post a few rough images for the next volume. Avoid if you don't like spoilers! In the meantime, as said above, please do share the project with anyone you think would enjoy it, it'd really help bring the whole thing to fruition!

In the meantime, cheers all, more soon!