So, kind makers of my book, I've done my first festival proper. Wilderness.  I had a standing ovation on the second night, sold all my books - including one to Tom 'The Idler' Hodgkinson, who I revere.  As for the festival itself, wandering around I overheard one of the security guards say, 'The only thing posher would be a cheese and wine party...'

Except when you borrow a tent sight unseen from a mate and it turns out to be a mountain tent of tininess.

I was lucky to have gone to the festival with Grace Barry-Tait, the superb singer and host.  She knows the festival build team.  A buggy arrived at the Yellow Area, driven by Mel and Liselle, who toted Grace and me with our stuff to Crew Camping. Liselle peered at my tent from under her vast curls. 'It's very small.  But I'm sure you'll get into it, don't worry.  Let's...' Grab a rubber mallet, ignore the instructions, and get on with it. 'There.  Except...we'll wait for Jackson to give his opinion.  He's in the shower.'

Jackson James Purcell emerged from the shower, wearing a towel. A face-swap of the young Brando and the young Sinatra, tall, with a boxer's build and gait, he took one look at the tent. 'It's a nylon cat's coffin.  Anything else you need to know?  Right.  How are you with stoicism?'

Got home to a letter about Tutu.  ​'In spite of itself, your book has soul...' 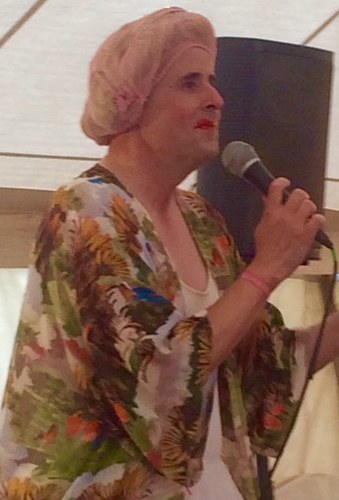