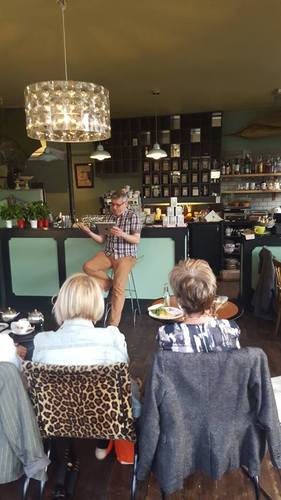 Mendelssohn had his Songs without Words, so I can I have book launches without books - events at which I read from my forthcoming e-book, natch.
The first for My Tutu Went AWOL! was on Thursday at Metrodeco in Brighton. My rider included eats and drinks from the exceptional Metrodeco menu.  Nicely!  The event was well attended and people listened closely while I read, gamely following me wherever I went off-piste.
'One minute we're in Iraq, the next you're at a convent bun fight being ticked off by the Mother Superior for telling her the facts of life,' heckled Metrodeco co-owner Maggie Morgan. She then truly made my evening by requesting an encore of the off-piste material.
Do you remember the time I circumvented Therese, soprano, giving encores at our shared recital? If not, please follow this link: http://iestynedwards.blogspot.co.uk/2015/12/queeneriana-its-not-quantity-of-your.html
For those of you not wishing to follow the link, here's a recap. My mother never follows a link, can I just say, seeing them as a cross between a ouija board and the live rail on the underground.   Anyway, Therese and I had shared the hire costs of the venue that night and were splitting the takings from the door. In the interval Therese decreed that as I had pulled in only two members of my family compared to her eighteen 'fully external' opera-loving gays, then she must sing more material than must I in the second half. If I insisted on singing all my planned programme, she would go to town with the encores.  To prevent Therese singing "I Feel Pretty" I immediately agreed to pocket little more than the price of my bus fare, a kebab and a tin of ready mixed Pina Colada.
Some months later, when we performed together at the book launch in Lower Chipping On-the-Wold, the question of encores never arose. Therese didn't even make it to the end of her planned programme.
I had convinced myself that the launch had been for one of the fab Deborah Moggach's early novels - hark at me! - but when I emailed Ms Moggach to verify, she replied sweetly saying that it wasn't and that she was sure she would remember what I was describing.
Therese and my contribution to the event should really only have been either as amuse bouche or as those last few petits fours put in a doggy bag. Except someone had put Therese in charge of the whole programme.
I opened with my Madame Galina Ballet Star Galactica shtik, then got quickly changed into civvies to accompany Therese in a recital of opera arias. A lovely,long recital of opera arias: "Ah, Forse Lui", "Casta Diva", "Un Bel Di", "O Mio Babbino Caro", "Vissi D'arte" and "Klange der Heimat".
After "Un Bel Di", the host, Graham, walked onstage carrying the bouquet that had already been presented to me, for my Madame Galina turn. Thrusting the bouquet into Therese's half-parrying grasp he whispered,
'You have to stop now. We're having complaints from...from...the neighbours.'
There had been a complaint, we later found out, but not from the neighbours. The author of the book under launch had pulled Graham to one side by the municipal tea service cupboard.
'What on earth is going on? I haven't so much as opened my book yet but there's been all this comedy and operatic singing. What's next, a magician? The raffle? That lot out there putting their car keys into the onyx bowl by the door?'
In the green room, meanwhile, Therese was saying, 'I didn't even finish the official programme I'd planned, let alone do any of the encores that would most likely have been wanted.'
I said, 'You couldn't have done encores here, Therese. There are no gays at all out front, let alone your tame ones. Lower Chipping's a minorities-free zone. When the nettles, patchouli and madrigals brigade here apply for Arts Council funding and need to play the disadvantaged card, all they've got is Kelvin the nouveau-riche coachworks owner.  "Oh, but my dear government arts funding wallah, we're talking about the most dire need for outreach. Kelvin's just so utterly milk in first".'