A Home for Rheumatic Sugar Plums 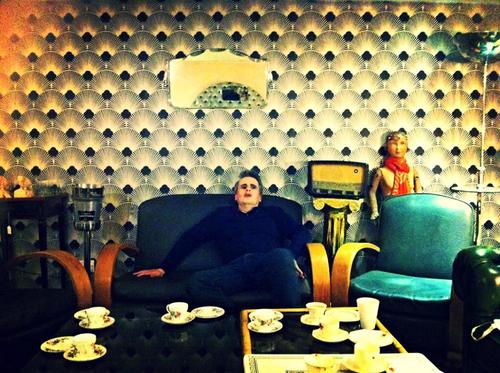 Xander Cansell, Head of Digital at Unbound Books, is already dealing with emails from friends and enemies asking, before they pre-buy, if they're mentioned in my book.

'I always know it's someone emailing about your book, Iestyn. Their names tend to be jewels, cakes or innuendo...'

Basra Regimental Sergeant Major and ex-Guardsman 'Tina' Turner, however, has emailed me directly:

'Iestyn, my mate, you are still fully barking, I see.  I believe with My Tutu Went AWOL! you've got quite the story on your hands.  Who'll play me in the film?  I think you should be played by Pat Butcher out of Eastenders. Nice to see that you're moving your hands, by the by and are busy. That your hands are not under your bum and idle. I've been thinking back to when your esteemed Commando mate Neil told me I would be looking after the Combined Services Tour for a day in Basra, could I pretty-please, while he went north to rid himself of his ongoing state of blue-bollocks? My ears pricked up when he mentioned you as a bona fide variety turn, Memories of my being on The Generation Game demonstrating square-bashing to Larry Grayson came to mind. And there you were, immediately in for a bollocking with your ballet tights dyed in tea drying on the anti-blast wall. Lamentably wanting decorum with your milk-bottle white legs out, as though my beautifully administered camp was actually a southern Pontins. Your bed area looking like a gypsy encampment with all your frills, pinks and sluts devices.  And when I heard what you were about to attempt onstage in front of that audience in Basra Palace. They'd only just sheared up the hole in the wall by the front door where the tank famously drove through. And there you were about to go onstage in all that frou-frou and no doubt cause another ruckus. Being compelled rather sharpish to leave the stage again by way of cans being chucked. I nearly couldn't look.  Thankfully I've got over being squeamish at the sight of blood...'

Long and short of it is, I have Tina's blessing to include him in the book.

'Which is just as well, my mate Iestyn. Your book can go ahead now in safety. I have long been a fan of Miss Joanna Lumley, so well done emotionally blackmailing that quote out of her! Seriously, kid, good luck with it all. But I suppose you have to just carry on with what you're doing. There can't be many rest homes for rheumatic Sugar Plums, now, can there?'