I am writing to thank you again for your magnificent support for the hardback of Magnificent Women and their Revolutionary Machines – which has received some brilliant reviews (see new jacket). My personal favourite came from an anonymous Amazon reader who said, 'As a woman working in engineering, I believe this book is quite simply one of the most important pieces of literature that I will ever read.'

And I am delighted to announce that the paperback edition of Magnificent Women will be published by Unbound on 4 March 2021, a propitious day ...

4 March is UNESCO World Engineering Day for Sustainable Development. In the words of Professor Gong Ke, president of the organising committee, to solve the world's most pressing problems – climate change, global poverty and rising inequalities – 'We need more engineers, especially girls and women.'

4 March is also the day on which the IET (Institution of Engineering and Technology) – led by Professor Danielle George, only the second female president in the IET's history – will present the Young Woman Engineer of the Year awards. A copy of Magnificent Women will be presented to each of the finalists.

An array of other events is planned in 2021 to celebrate the 150th anniversary of the IET.

March 2021 is also Women's History Month – an international initiative to highlight women's achievements in history, though more conspicuously marked in the United States, it seems, than in the UK. 8 March is International Women's Day.

With all these exciting events in the pipeline, media interest is building in the paperback publication – of which more later – and work has started on scripting a six-part television series, but no firm deal has yet been agreed.

You can pre-order a copy from all the usual online outlets, including your local bookshop. 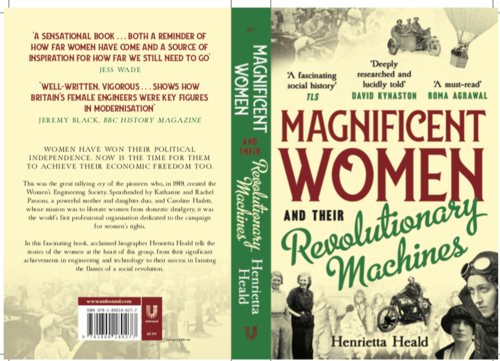 Congratulations Henri on the paperback. How lucky are those finalists of the Young Woman Engineer of the Year awards.