Reggae is the ONLY Music

Roger Mills was born in Hackney Hospital, 1954. "I have always lived in Hackney, in flats until I was five and then a house ever since. I went to secondary school in Clapton, a comprehensive. It was a huge modern school with thirty or more kids in a class. I worked for about five years in various advertising studios when I left. I was a 'paste up' man, he's the one who colates all the different ingredients of an ad. and sticks it together."
He was part of Hackney Writers' Workshop and Basement Writers. This piece comes from the first Hackney Writers' Group anthology that came out in 1977. In 1976 he had a story, The Interview, published by Centerprise. In 1978 the autobiographical A Comprehensive Education was also published by Centreprise and included several late 60s skinhead incidents.

Moonstomp is set in 1979, just a couple of years after this snapshot of reggae shops in Hackney. The Borough was home to many reggae shops, favourites of mine included Rupie Edward's stall on Ridley Road market, Gladdy Wax, Third World, and Regal Records. Things were much like the description below through the 70s and 80s... 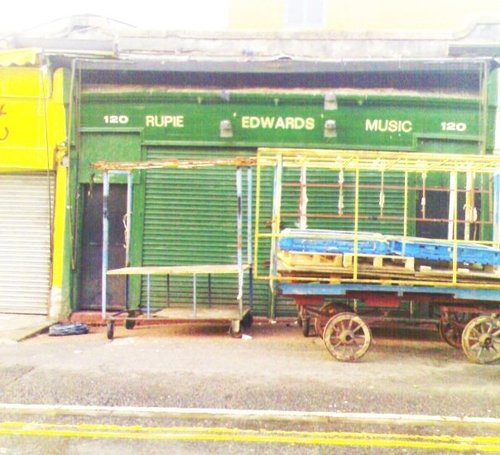 For most young black kids, reggae is the ONLY music. Forget the stuff you see in the pop chart, that's white man's reggae. What I'm talking about are the obscure West Indian import records that sell by the dozen in those black owned record shops that no white man dare enter. Not that they would be unwelcome, but like the Caribbean supermarket around here it's like another country, Jamaica, to be exact.
Reggae comes at you from all angles around here, from basement flats and tower blocks and, of course, those high street record shops. It comes canned from young skinny-legged girl's cassettes and from open car windows, a sound to savour on hot sticky summer afternoons. Unlucky if you live above a black family though, because you'll hear it coming through the floorboards too. "Here we go again", my parents would say when Saturday night came. The black family along the road always had a party that night, and I mean a party.
It wouldn't start until 11 o'clock and woud begin with a fanfare of slamming car doors. Then the reggae began, except that it was called blue-beat then.
Forget your finely tuned stereo and tweeters. They played their discos through huge monoliths of machinery, a closet with a speaker in it.
And on they'd go until morning. I didn't mind it, lying in bed listening to it all, the music stripped to the barest crudest beat by the distance and air.
No, I didn't mind it at all. I pictured them all dancing in hot moving rooms. For them it was a weekly return to Jamaica, the reggae records a cheap ticket home.

Me in the Hackney Museum with a historical map of the borough's reggae shops. 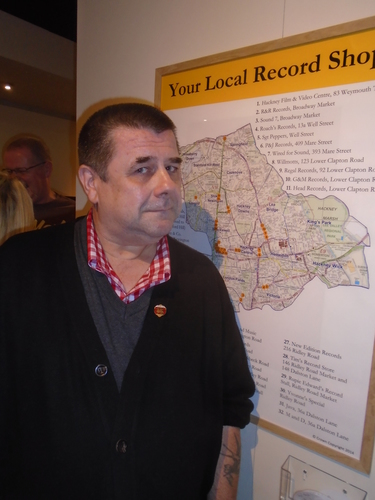