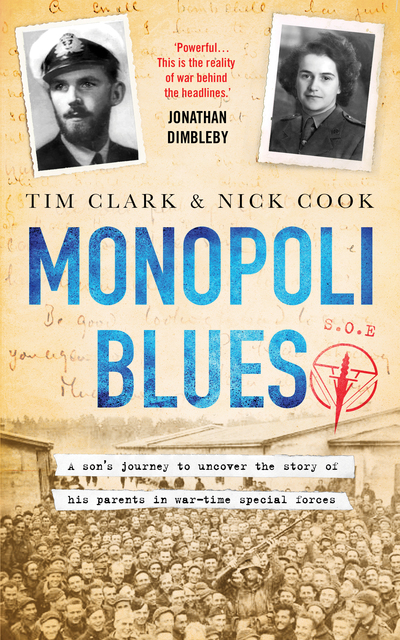 “I was offered the opportunity either to go to Australia or to go with the partisans in Northern Italy. I thought that going to the partisans would keep me nearer to my girlfriend now, my wife” (Bob Clark – IWM interview 2004) A son’s journey to uncover the story of his parents in special forces – war and love in Italy

Use Hive to buy the paperback from your local independent bookstore.

Sir Robert (Bob) Clark was a war hero of the old school.

He never talked about his experiences in the Special Operations Executive – often referred to as ‘Churchill’s Secret Army’ – or boasted of his successes in the City that followed.

When he died, all his family knew of his time in the Second World War was written down on six pages of handwritten notes - and embodied, symbolically, in a Distinguished Service Cross awarded for an action about which they knew next to nothing.

‘Monopoli Blues’ recounts the story of a son’s mission to uncover the top-secret careers of his father and mother during the Second World War. Both of them had worked for SOE in Italy.

With journalist Nick Cook, Tim Clark sets out on a journey that takes him from former SOE bases in Scotland and Cornwall to the battlefields of Italy and Germany, where Bob’s war in Europe ended.

Bob Clark was barely 19-years old when he joined SOE. For almost a year, he ran gunboats along the Italian coast, blew up railways, trained partisans, surveyed secret landing sites and smuggled agents behind enemy lines. And everywhere he went, ‘Falla’ (pronounced ‘fire’) – his diminutive teddy bear – came too.

The book describes his intense bond with the partisans – one of whom tracked him down fifty years later – and his betrayal, capture and imprisonment in 1944. It was during his captivity, in Turin’s infamous Le Nuove prison that the Italian fascists proved themselves to be even more brutal than the Gestapo and the SS.

As well as recounting the story of a little-known campaign, Monopoli Blues remains at heart, the tale of two young people whose lives were forged in, and forever changed by, a secret and merciless war. Bob met Marjorie, Tim’s mother - a girl from South Wales who was recruited into SOE in 1943 - at SOE’s HQ in Monopoli, in the south of Italy. She became his radio operator.

But Marjorie knew, as their relationship blossomed, that the day was coming when Bob would be deployed behind enemy lines. That day arrived in November 1944, when Bob parachuted into northern Italy. But his secret ‘Clarion’ mission went wrong from the start, and when Marjorie received a coded message from Bob letting her know he had survived the jump, she had no way of knowing it would be the last she would hear of him until war’s end.

Monopoli Blues traces what happened during the ill-fated mission and Bob’s long and hazardous journey across war-torn Italy and Germany, as the Germans moved him from one prison camp to the next, at times subjecting him to unspeakable brutality.

As they set out on their journey, the authors had hoped to fill in a few gaps in the secret, wartime career of a quiet, reserved hero.

What they discovered was an extraordinary tale of courage and stoicism – and a love story that survived the horrors of capture by the enemy.