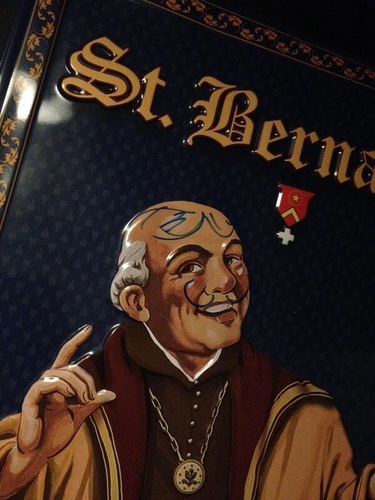 When I started this book, the original idea came from hops. For about thirty seconds, I was going to write an in-depth analysis of and love letter to hops, based on the various visits I'd made to hop farms and festivals, and the impact that hoppy pale ales had had on me (not to mention thousands of others) on the journey of discovery around good beer. After the half-minute-long rush of memories and images stetching from Portland, Oregon via Slovenia and Bohemia all the way back to Kent, a voice in my head said 'Why just hops?' and the idea for this book appeared fully formed.

But over the last few weeks, it's the section on yeast that's really started to take shape, and possibly become even more interesting.

Two weeks ago I went to Amsterdam for Carnivale Brettanomyces, a relatively new but rapidly growing festival of 'sour' beers, which proved instantly what an inadequate adjective 'sour' is to describe such an intriguing and varied range of beers. My latest Publican's Morning Advertiser piece gives a fleeting impression of my thoughts over the weekend, once again demonstrating how inadequate a 700-word column can be when tackling such big subjects. I need to do a lot more to nail a beer style (or styles) I've always been lukewarm about until now, but it's such a rich area and my notes go in a lot of different directions - some of them doubtless leading to dead ends, but some that link a quirky beer style to big concepts, as big even as our ideas about life and death.

I enjoyed most of the wild beers (a better word than 'sour') I had, and I felt safe in the knowledge that the graffitied St Bernardus Monk (above) was always watching over me. Yes, I know he's on a Belgian beer label rather than a Dutch one, and that he's the face of abbey beers rather than geueze or lambic, but trust me - he was looking after us. Just look at his cheery face and rakish moustache.

Some of my drinking partners were shocked, however, when after a few hours of sipping lambics, I opted for a couple of pints of clean, crisp Amstel to cleanse my palate. I make no apologies for this. It tastes a hell of a lot better in Amsterdam than it does in London.

Also, it created a nice context for the story. Amstel is owned by Heineken. The Heineken Experience, a brewery tour-cum-theme park ride-cum-sustained marketing assault, is one of the biggest tourist attractions in Amsterdam. Central to the whole concept is the proud story of the Heineken A Yeast, a properietary strain that helps give Heineken its slightly sweet, floral character. The whole point of the A Yeast is that it is a single strain yeast propagated in a lab, kept entirely free of any contamination. It's the yeast that makes the beer that is synonymous with Amsterdam, one of the biggest beers in the world, sold in more countries than any other. It's all about purity, consistency, standardisation and sterility. And here on its doorstep was a festival celebrating the very opposite.

This clash - the glass of barrel-aged, blood orange-infused, deliberately 'infected' beer and the endlessly replicable global monolith - forms the framework on which the whole section about yeast now hangs.

I've expanded on that today. I'm writing this post in Burton on Trent, after arriving at the Marston's Brewery at ten to six this morning to see the Burton Unions being primed and put into action. 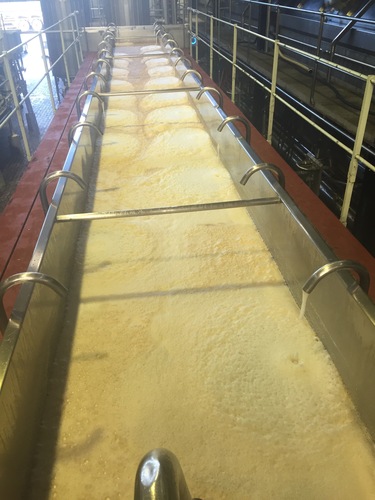 I won't explain the full story of the unions here, but if you love beer, I'd say seeing them at work is one of the top ten beer moments you need to experience at some point in your life. Still pictures can't convey it, but this elaborate, improbable fermentation set up is the last of its kind in the world. Scores of huge barrels hanging suspended at head height, yeast pushing itself up through swan necks into this long trough, where it remains while any beer in the mix drains back into the barrels below. Yes it's expensive. Yes it's bizarre. But it's the way the yeast likes it, and the most important job any brewer has is to keep their yeast happy. You can't make good beer if it's not.

In other news, I hope to have some big announcements re funding and timing in the very near future, when I'll finally be able to let you know when you'll be able to get the book! It's going to be a while (I have research trips planned into early 2016) but I'll keep you updated.

(p.s. it's worth repeating that money pledged for the book is to pay for publication costs only. You are not paying for me to swan off to places like Amsterdam - that's all at my own expense.)

(p.p.s) If you haven't yet pledged and want a copy of the book just head here and if you have and want to read it, then please do share this post to spread the word.)

Sounds great Pete.
It's fun to broaden your beer horizons. I've just got into Hefeweizen after a tasting at a gathering of the London Amateur Brewers.

Now there is a yeast (Hefe) that you hopefully have a trip planned to see in action!

Pete, I seem to remember there's a good story about Carlsberg helping Heineken out with some yeast when it had a particularly nasty infection. Same happened with Tuborg back when they were separate companies. It used to happen quite often that the breweries would help each other out around the 1880s.

Yeast is by far the most complex and multifaceted ingredient of beer. You'd do well contacting Chris white @ white labs, he's a veritable mine of information...maybe arrange a visit to their productionf facility at warpigs Copenhagen if San Diego too far