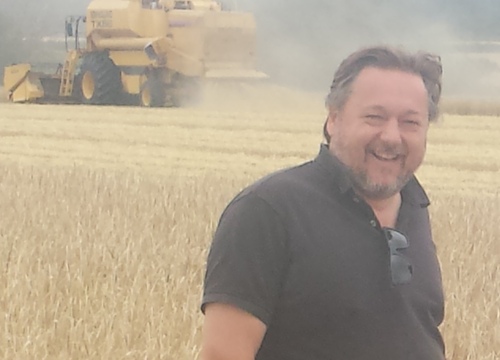 Well, it's not mine and it's about twenty years old, but you get the idea.

Two days ago I was in Norfolk for the harvest of Maris Otter barley.

This year marks the 50th anniversary of Maris Otter being in commercial production. For many of those years, maltsters and brewers didn't pay much attention to the variety of barley. Barley was barley; it was the process of malting that gave it its character.

In 1992, a couple of grain merchants challenged this idea and have continued to do so ever since. Barley varieties cross-breed, and had become mixed up. These guys worked at repropagating Maris Otter as a pure variety, separating it from everything else, and convinced people that it was a superior varioety for ale brewing.  A few years ago they made barley porridges using different varieties - before malting - and proved a significant variation in taste existed.

On Wednesday we harvested the 'mother field' of Maris Otter. In the centre of one field is a barren strip about ten metres wide, forming a square around a four-acre plot in the middle. This plot is sown (or 'drilled') with the purest Maris Otter seed possible. Once it grows, it's inspected with a magnifying glass to make sure it's pure Maris Otter.

The seed from this plot is used to plant other barley fields, and that harvest provides the seed for a wider area, and so on, until the third generation, which is harvested in five years time, is used for commercial malting. Every single grain of Maris Otter being used in brewing today owes its existence, and can be traced back to, these four acres. Which is kind of mad.

In recent years, ten of the thirteen Champion Beers of Britain were brewed with Maris Otter. So while not everyone agrees, it does seem there's evidence that it's a superior variety for brewing ale.

September sees a special celebration of Maris Otter featuring fifty different beers brewed with the barley. I'll be doing a short talk at the trade day of this festival in Norfolk, and hopefully by that time I'll have completed my exploration of this amazing grain.

It's such a fascinating process, going as far as possible up the food chain of beer. It's great to have a reason and a narrative route map to explore grain farming, something we take completely for granted. The precision of farming, the interplay of the elements and the farmer's judgement, is compelling. Remember, this is essentially just a variety of grass, that once grew amid other grasses. Over millennia, we've selected and bred it to get it to what it is today. You'll have seen it growing tall and green, the ear pointing upwards. From June onwards, the stem dries out to straw and the grain head begins to droop. Once it's bent double and golden, it's about ready to harvest. The seeds loosen their grip on the ear they're attached to, making the separation of the 'barley from the chaff' an easy operation. You need the crop to be dry to harvest it properly - ideally you want to be doing it after a couple of hot, sunny days. Through July, the crop is inspected daily to see if it is 'fit'. Our crop wasn't quite there - it could have done with another couple of days to be perfect. But the risk is that if you leave it, hoping for better weather, and you get stormy weather and blustery winds instead, the seed can be blown off the ear and you've lost your harvest. I've been on call for over a week, waiting to drop everything and get on the train at 24 hours notice when the final harvest was finally declared.

And then you've got the malting process - one of the most miraculous and entertaining aspects of brewing - but that's another blog post.

'What Are You Drinking' has now joined the list of 'almost there' books on Unbound. We're now doing a big push to get it over the line. Today sees the start of London Beer City, a ten-day long cornucopia of beer events, with the London Craft Beer Festival and of course the Great British Beer Festival over most of the week. We're going to be issuiing a special discount code, for the length of London Beer City only. If you've already pledged for the book, you can take advantage of this discount to upgrade your pledge to a higher level for less if you like - just contact Unbound and they'll sort it out. But if you can also help share the link when it appears, we should get the final push we need to complete our finding journey.

I'll also be doing a What Are You Drinking event at BrewDog Shepherd's Bush - more details here - https://www.facebook.com/events/854800324606221/ I'm going to be telling some of the stories I've got so far, making malt porridges and hop teas, and tasting a flight of eight beers that highlight what each ingredient does. Hope you can make it!