At 5am on Monday, 12th September, I got up early to go to the airport to go on a much-needed fortnight's holiday. Four hours before, I pressed 'send' on the final sections of my first draft of this book!

It was a hell of a ride getting it finished in time. It's the hardest book I've ever written. I have no scientirifc background, and I absolutely wanted to make sure the book wasn't too technical, which meant I had to understand it well enough not just to rehash what I was learening, but to really get inside it so I could write abiut it in a simple, engaging way.

There are parts where I succeeded in doing this and parts where I didn't. So Jason, my ersthwhile editor at Unbound, has just completed a read-through. He edited my furst two books, Man Walks into a Pub and Three Sheets to the Wind, back in the day, and it's great to have the band back together. He thinks my writing style has developed comnsiderably since those days, but has still found many bits that can be improved, as I hoped and knew he would. The writing style isn't really the hard bit any more - the hard bit is taking such a vast wealth of material and ordering it and presenting it in a coherent way that bounces along and keeps the reader interested. I want this book to be engaging to the general reader as well as interesting to the brewer or beer geek, and it's a tough balance to pull off.

So we're on course to have re-writes done by the end of this month. We have Neil Gower, the enormously talented artist who did the current versions of Man Walks Into A Pub, Hops and Glory and Three Sheets to the Wind on board to do a cover that resembles these books but moves the style on a little, which I'm also delighted about. Here's a poster Neil did for me recently to promote my beer and music matching show, to get you in the mood. 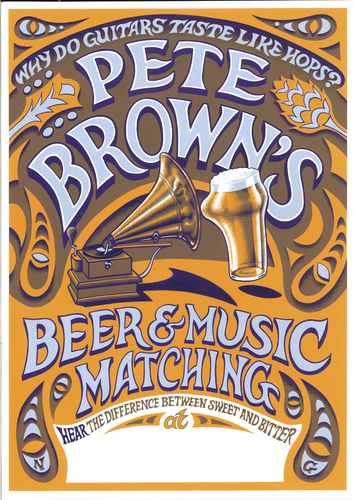 The book will be published around May or eary June next year, but as a suscriber you'll get your copy as soon as it's back from the printers. That won't be this side of Christmas, but it should be a bit before the public release.