Having left the story of my Rock n Roll cycling and philosophy tour (do those words really all fit  together?) at the Manchester Spin Festival we ride on to the next stage; the bucolic setting of inner Wales and the lost in time, but somehow right on the button, market town of Lllanidoes.

In fact this really was verging on Rock n Roll, given that I was performing an actual music gig in The Old Mill pub. Alongside my writing  I’ve long had an interest in folk and alternative music. In a last minute flurry of philosophical showmanship I asked the pub if I could do a talk on “Mind is the Ride,” in the little function room behind the bar. The high level promotion for this Wembley gig included putting up some photocopied posters in the market square on the day of the talk with details scrawled on the side in biro. Thanks to Rosie Sleightholme, a Bristol based singer and multinstrumentalist, for inviting me along. Llanidloes is a mixture of something old, an ancient border town, something new, an alternative /hippy community of disaffected blow ins, something borrowed, gently fading gentleman’s outfitters and charity shops, and something blue, a river of free thinking musicians, artists and writers. 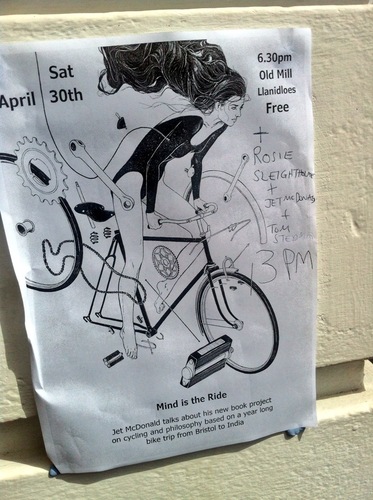 To be honest I wasn’t expecting anyone to turn up behind the pub but was pleasantly surprised at the audience that settled down behind their half pints with some great questions...could not the meditative experiences of cycling as easily be found in fell running or swimming with orca whales?

Later Rosie told me that she had met Natalie Bennett, ex leader of the Green Party, in Llanidloes coffee shop and taken a selfie with her. Llanidloes is that kind of place.

Coming back to Bristol I found this sign just off Junction 2 of the M32. 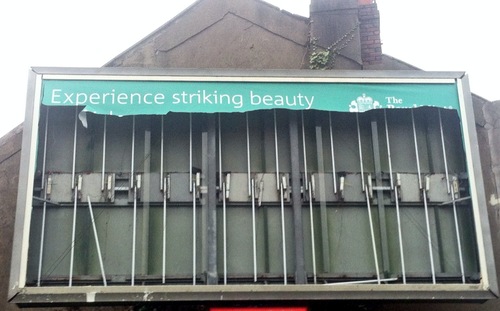 "Poetry of the underpass"

Next on the itinerary was a visit to Leicester’s Bike Lounge. Julian Sayarer, political commentator and long distance rider, had previously alerted me to Bike Lounge, run by the irrepressible David Weight, cycling enthusiast, music officiando and all round raconteur. Bike Lounge has been running in different guises in Birmingham and Leicester for a few years now and offers a lively social night for riders from all parts of the cycling spectrum. It was a pleasure and privilege to speak to an audience that had especially come along to hear me talk and discussion continued late into the night at the pub opposite and back at David’s house till two in the morning. Rock n' Roll! 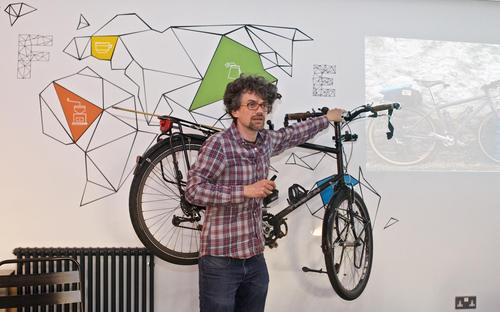 "Watch while I levitate my bicycle. Soon all philosophy will be mine..."

After a brief pit stop to earn some money (and carry on writing the book!) I was off to Spin London, the London version of, well, Spin Manchester, a cycling show with a focus on the city cyclist. Here I got to meet Chris Boardman, legendary hour record holder, Olympic medal holder and entrepreneur and very decent fellow. I gave him a copy of Boneshaker magazine and he seemed genuinely interested in its lateral take on cycling community and culture. 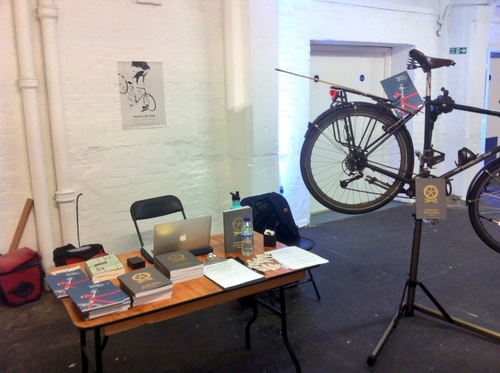 Spin London was a completely different set up to Leicester Bike Lounge. Whereas Bike Lounge was a conversational debate, Spin London had the adrenalinised buzz of a festival appearence. I took the stage with a radio mic and my words on Heidegger and bike tools echoed around the Truman brewery in Shoreditch as a DJ set throbbed from the belly of the warehouse. Later I had an enjoyable Q and A with Rob Spedding editor of Cycling Weekly. What relevance, he asked, would philosophy have for the average racing cyclist in lycra? Well this was my response as elaborated on Bike Radar

From radio mics and urban DJ sets to a sunshine bathed cycle touring festival in the Lancashire countryside.

“The Cycle Touring Festival,” set up by Laura and Tim Moss in 2015, is completely different to any bike event you will have been to. It is a series of talks by some of the most engaging and well-travelled people in the UK and the world. Everything from cycle touring with kids, cycling with a message with Julian Sayarer and Kate Rawles, to cycle touring over and around the Andes with the editors of the Adventure Touring Handbook  Harriet and Neil Pike. I watched Dr Stephen Fabes try to fit in the first four years of his incredible six year bike tour into thirty minutes and I was on a panel on how to survive returning from a long bike tour and on cycle touring as a couple with my girlfriend Jen and with round the world adventurer Sarah Outen and her girlfriend Lucy. 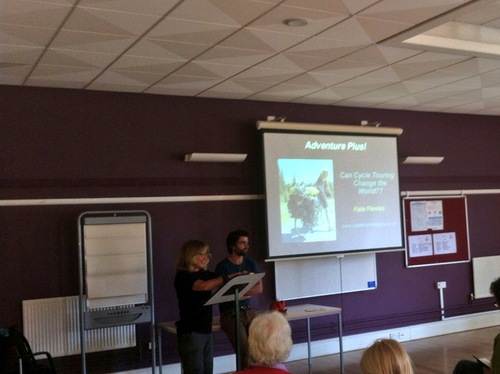 "Can Cycle Touring Change the World?" Kate Rawles and Julian Sayarer at the Bike Touring Festival

The very fact that the humble bicycle can spin out into such an array of discussions shows to me that cycling is so much more than the sum of its simple and endlessly technical parts, that cycling is part of a mainstream discussion, a conversation that is rolling through our lives and out past our doors right now. Tip of the hat to Laura and Tim for setting up something unique and to Laura’s mum and all the volunteers for keeping the festival fuelled and rolling.

The following weekend it was back into the depths of Wales and off to Hay on Wye. This time with a guitar strapped to my pannier rack to play at Hay on Wye’s upstart Philosophy and Music festival, “How The Light Gets in.” As well as taking my journals on my bike trip to India I strapped a Yamaha Junior guitar to the back, wrapped it in a bin bag, and wrote seventeen songs on the way. You can hear some of them here. On my way to Hay I cycled up the gobsmacking Gospel pass (which is a reward for “Mind is the Ride” crowdfunding by the way), past “Lord Hereford’s Knob” and down into Hay. After my gig I listened to fascinating talks on the role of "Reason in the West" with a “Secular Buddhist Monk,” the "Neurological basis of Metaphor" and the eloquently left field Robert Sheldon arguing that the “Sun has consciousness.” I also bumped into the genial and self-effacing Tom Hodgkinson of The Idler who was giving a talk on how to turn off your Smartphone and tune into the rest of your life. He flipped his old skool "Idiotphone" in his hand like a fat domino. I wanted to hang around for more philosophical chat but on such a sunny day the river was ridiculously attractive, so I took a dip in the Wye river before setting back up Hay bluff with my guitar. 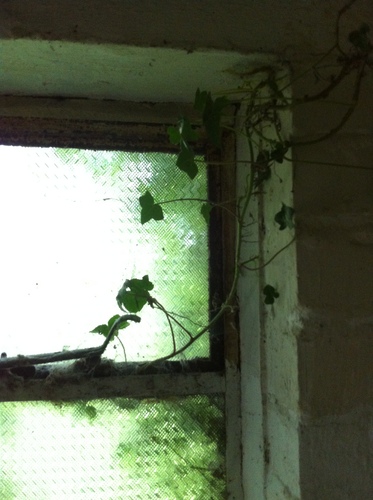 This is not the easiest way to ride back to Bristol after a hot weekend. But oh those gorgeous green hills on such a still Summer day. It reminded me of the pastoral settings of Romania, caught in an eternal moment like they were set in glass. And then I was blasting down the Vale of Ewyas, burning smoke off the brakes and somehow taking the festival campfire back with me into the city. 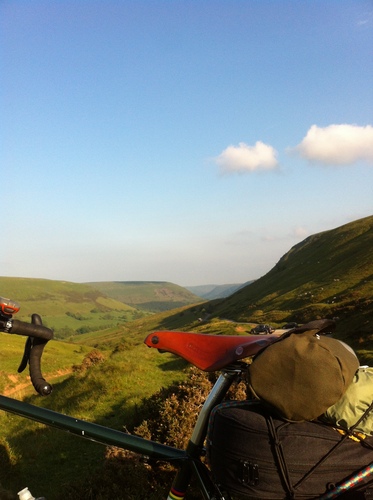 Then I hiked my bike onto a train and all the way up to Edinburgh for Edinburgh Cycling Festival. At the “Edinburgh Centre for Carbon Innovation” I listened to a presentation by journalist Scot Whitlock on his journey along the pilgrimage trail of the Camino de Santiago on a small cheap folding bike he deliberately chose for its inappropriateness. I love that kind of bloody mindedness. The audience was well up for a discussion and that is a chief delight of these kind of events; meeting potential readers and sharing their ideas with the pages of Mind is the Ride. Everywhere I meet people who've found that cycling has given them a transcendent sense of movement, has changed them in a way they find difficult to name but is deep in their bones, in their sense of who they are.

Kim from the fesival told me that the venue I was speaking in, the "Edinburgh Centre for Carbon Innovation", used to be the old Medical School. Here I was coming full circle from my medical school beginnings to a wider ranging discussion of how mind and body roll into one another. It’s fitting that the humble bicycle has brought me to this understanding, a constant companion and the wisest of educators, over many thousands of miles. 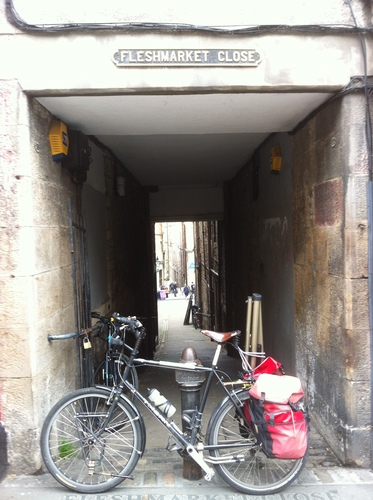 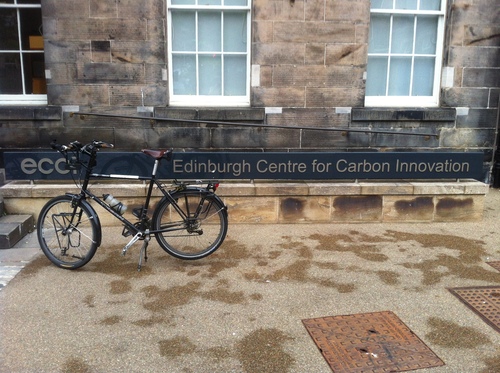 It was only a hundred and fifty miles east from Bristol to Brighton but I cheated, again, by taking my bike there on the train. But, oh, as the Four Seasons sang, what a night. Carine and James from Ride with A View set up the event with the guys at High and Over who were organising Brighton Bike Film Festival. This was the opening night of the Film Festival and the first of a series of Ride with a View talks. Long may both continue.  Special thanks go to Carine and James for putting me up, bringing together such an interesting mix of people and making it all seem so easy. I found a packed house at the ONCA gallery and we had cheering, existentialism, beer, barbecue sausages, dancing and a couple of wheelies on the way home. 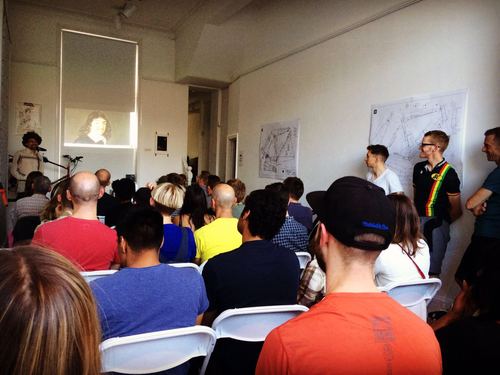 "ONCA. A packed house proving that Descartes and Bottom Brackets are the new Rock n Rolling."

ONCA is a unique space that brings together environmental themes with independent thinkers and makers. In the window there was an exploded handmade Reilly bike and technical drawings of their bike models and then, propped up around me, more of the sleek steel steeds that made you want to jump on and pedal off.  On the wall there was bicycle wallpaper you could colour in with RichMitch, in rhe basement a Ride with a View gallery, a seasonal snapshot series by innovative bike designer James Olsen and a Mini Click slide show…You certainly get your miles worth at ONCA. 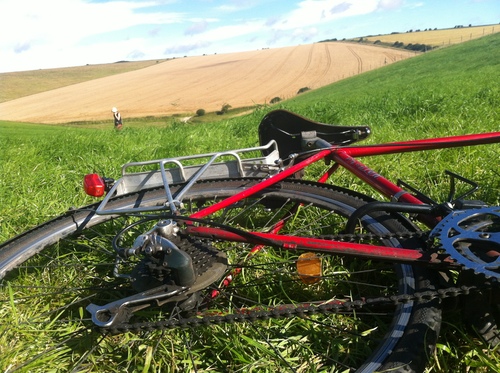 Did I mention there was a film festival too? Over to Brighton's York Picture House and two whole nights of bike flicks. Woo Hoo.

I have to admit I was a bit worried if I could take much more cycling, it felt like there were bike rivets coming out my ears. But the films reminded me that cycling is about so much more than just bikes. It's about people and the ways cycling can bring those people together and transform their lives. A special mention has to go the surreal and brilliant animated short   "Velodrool" (bikes turning into fish turning into galloping hairy legs turning into magic hats turning into unicycles anyone?), King of the Mountain about the Rwandan cycling team and finally Mama Agatha, a genuinely moving documentary on the way that a Ghanaian woman was helping women from immigrant backgrounds, not just to learn to ride, but build a community that outstripped national boundaries. I cannot think of a more timely film.

Unfortunately I couldn’t go to night two of films at the cinema. Bah. But I did get to go to the "Dunwich Dynamo." Hooray! "The Dunwich Dynamo" is a twelve hour bike ride 200 km through the night from Hackney to Dunwich. It was quite unlike anything I have ever done, in my life, and needs a blog entry in its own right. 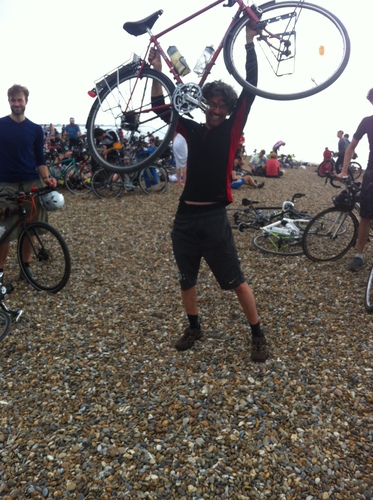 So, for now, I declare this the end of the Rock n Roll Tour Part Two. Kerchang.

And please don’t forget to pledge for Mind is the Ride if you haven’t already and tell ALL your friends. We’re over fifty eight per cent funded but there’s still a fair way to go... https://unbound.com/books/mind-is-the-ride

My next talks are at Rapha CC Café Manchester on Aug 18th and Pedalling Ideas in Leeds on 18th September.

Thanks for coming along on the ride. 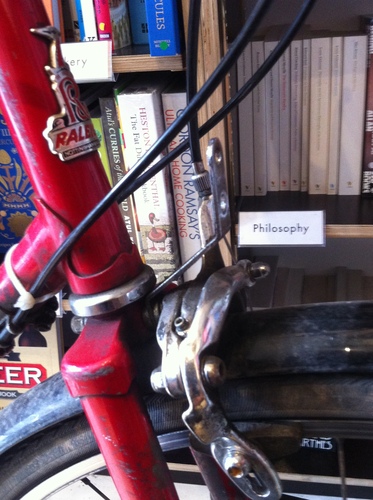