I’ve been storming around the country by bicycle and train spreading the word about “Mind is the Ride.”

First stop was planet “Look Mum No Hands,” the stylish and uber friendly bike café in central London run by Alex, events organiser supremo, nervous speaker mentor and all round excellent lady. Alex and I and the bike mechanic lumbered across the café with a HEAVY duty bike stand, plonked it up onto a bench and then hauled my bike, Bertle, into its maw. Thus “Mind is the Ride” – The Rock n Roll Tour – was born. 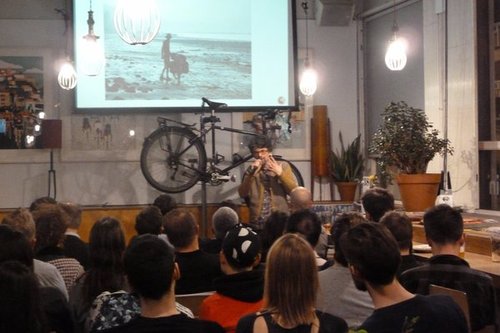 I was frankly a bit nervous about my first talk. I had this somewhat naïve belief that a scrum of academic philosophers would nip up from the London School of Economics on single speed bikes and start quizzing me about Wittgenstein and how to remove the rear sprockets with a chain whip.

The reality was a gaggle of open, curious cyclists knocking back a few beers on a balmy Spring evening. The lovely folk from “Ride with a View” came all the way up from Brighton to hear me talk and bore the exciting news that I would be talking at Brighton Bike Film Festival in July.

Next stop on the tour was “Bespoked.” Handmade bike show par excellence.

Not far to travel for this one as it was just a roll down the road in Bristol.

Phil, Mr Bespoked, and Polly, the talks organiser, laid on a blistering array of speakers including Boneshaker allies Julian Sayarer and Emily Chappell who were both talking on the same platform about their experiences of the London bike courier scene. Two couriers and long distance thinkers for the price of one. Bonzai! Both with very different but complimentary takes on a dream job for some and a guerrilla traffic sprint for others.

I had a warm friendly audience for my own talk on a hot hot day and enjoyed some thoughtful conversations afterwards with philosophical frame builders and wheel builders. Check out Robin Mather’s triple headed bike medusa here and Ryan of “Ryan Builds Wheels,” the wheelwright and thinking man’s mechanic, who once nailed a copy of “Zen and the Art of Motorcycle Maintenance” to the wall of Bristol’s “Roll for the Soul” workshop. 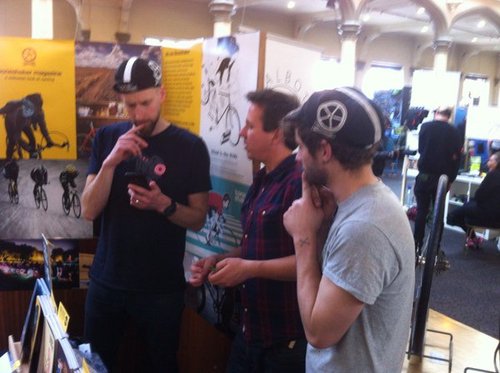 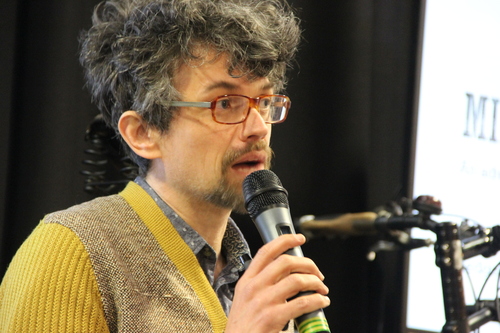 Next weekend up it was Pannier cc’s “Dark Peak Weekender” in the Peak District. Pannier cc provide a classy experience for bike tourers looking for a bit of style in their weekends away. There were guided rides of the Peaks during the day on Saturday and then a stellar line up of speakers in the evening after a banquet meal. I was the final speaker of the night after a lot of Pannier “Route Beer” had been supped and it was the closest talk yet to a cabaret style stand up event. It was also one of the most enjoyable. Rock n' Roll and Philosophy! The next day there was a “loaded hill climb” up a very steep road, with equally weighted pannier bags on the back of our racks, in which I came a glorious last. I was graciously given my own wooden palette to stand on next to the podium winners and a Titanium spork as a “wooden spoon.” Classy. 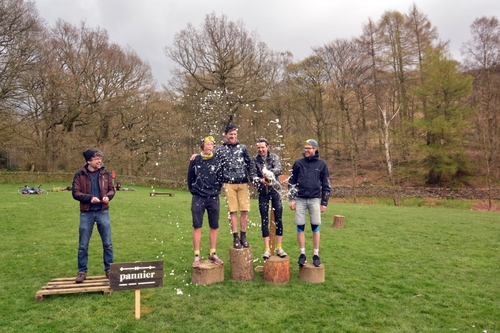 Then it was onto the Spin Bike Show Manchester in a sturdy brick warehouse packed with independent traders (check out Meame, Queen of the Mountains - top notch bike fashion echoing the exponential interest in cycling for women riders.) Plus a crowd of independent thinkers. One of the highlights for me was doing Bike Yoga with Marie Harris on Sunday morning. Boy I really needed that stretch. And then meeting Graham Obree, the freethinking master of the hour record and land speed experimenter. “I don’t need your praise,” he said pointing at the audience, “for I’ve got inner contentment.” And also “I ride for now, for the moment, not for the promise of the future.” Quite a man. I gave him a copy of Boneshaker Magazine that he asked me to sign. I’ve asked him to retweet “Mind is the Ride.” Mr Obree if you can hear me, you tweet is worth ten thousand wheel revolutions…

I had an interesting discussion in my Manchester talk with OJ Borg, the Radio 5 Live presenter, about whether the philosophy of “Mind is the Ride” came during or after the bike ride…The answer was that philosophy found me, mostly in the middle of the desert when I had a clean slate of a brain.

Manchester, despite all its travel infrastructure problems, is a great place to cycle. Flat as pancake. The Holland of the North. 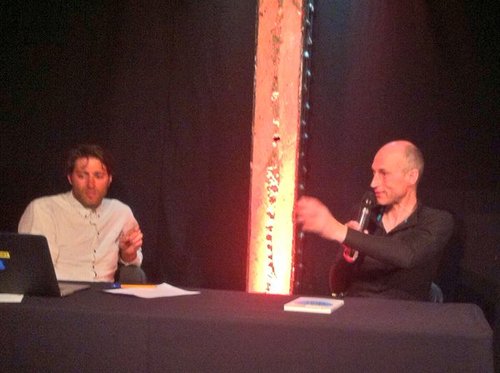 Graham Obree telling OJ Borg how it is...

I’ve realised now I’ve been talking at so many venues and met so many interesting people that I’d better divide this blog into two.

So I hearby declare this Part One.

Look out for Part Two, the Rock n’ Roll sequel, any time soon at a Shed near you.

Don’t forget to pledge for Mind is the Ride and tell your friends about the book. It’s going to be a corker. I can feel it in my Rock n’ Roll bones. 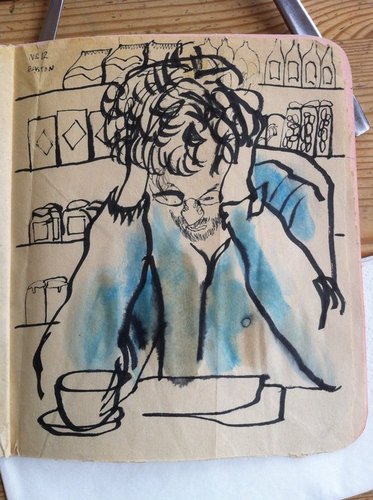 Jet McDonald thinking about the next sentence...

If you're still thinking of tour options there are a couple of cycle cafés in the North East of England that are up for speakers. Graham Obree having been one. The best is Pedalling Squares http://www.pedallingsquarescafe.com I know Eric (the owner) would be up for it and there's usually a good crowd who turn out.

apologies for the delay getting back to you about this. Great idea. I'm around that part of the country Sept time so may well get in touch with Eric about a talk then. Thanks again for your support and the suggestion...

So your visit to the Edinburgh Festival of Cycling wasn't part of the tour? Here https://www.flickr.com/photos/edfoc/27543261872/in/datetaken-public/ is a reminder that you were there ;-)