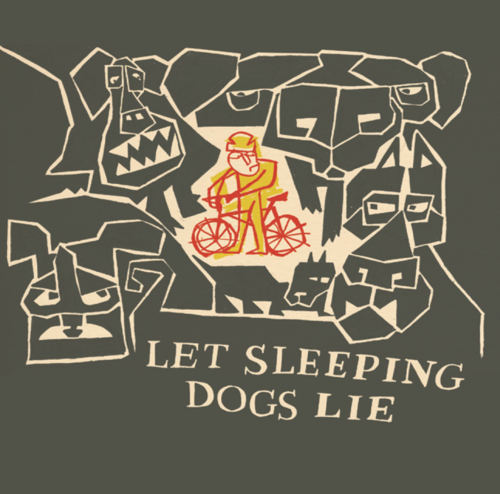 This is the second in a series of articles written for Boneshaker magazine.

Cyclists. Watch your ankles. Dogs. Watch out for those bike pumps.

"Let sleeping dogs lie. Well, I would do, if they didn’t  want to bite my bleedin’ ankles off. In doggie dreams there is only one thing higher on the list of treats than rabbits, and that’s bikes, or, to be more target focused, ankles.

Back in the UK, dogs are an annoyance and at worst a threat. The further east you go, the more that threat becomes a risk, and if, like me, you are cycling day after day, month after month towards India, your ankles begin to flash like lollipops. At the time of writing I approach Turkey, home of the fierce Kangal, a huge black-headed mutt originally bred to protect sheep and more recently dislocated into rural villages to keep cyclists sprint-fit.  Worryingly, they have collars with large metal spikes on the side like those cartoon hounds in Tom and Jerry. For petting they are not.

Most dogs do not advertise their credentials so openly however, and have to be judged on behaviour alone. To this end I have divided them into four, more or less toothsome categories.

The Domestic Leashed concerns me least, though it comes with standard bicycle-detecting radar. The first domestic in any given village will often prick up its ears to your soundless cogs up to a mile away. There follows a series of yap attacks as each subsequent dog is alerted to your presence behind fences and chicken wire, yanking against their lines like impotent starlets.

A pertinent question here is why are these dogs so attracted to bicycles? Neither cars, nor children, nor, I imagine, ten foot waddling peacocks seem to incite quite the same reaction as the average two wheeler.

Some have argued there might be some kind of high-pitched sound (inaudible to us) generated by the spokes that drives them crazy – a kind of suprasonic windmill effect. I personally believe it is a smell issue and it is the potent combination of unfettered human sweat and bike oil that raises their hackle. Surely this is an area of research that some bright PhD student should embark on – one of those Oxbridge types that have cycled into University Challenge  to beat the traffic.

Anyhow back to the dogs, and my next category – Domestic Unleashed, a nuttier proposition altogether. These hounds either mark their territory as the end of the driveway or, as with farm dogs, the sight of your arse up to three miles down the road. Strays are a different matter. The Scared variety look like they have suffered enough in this life and, like the most bullied boys at  school, scuttle away with tails down. Their dark side is the Scary Stray, the Darth Vader of ankle loppers. No owner to listen to, no instinct  to obey bar their own fickle urges; these creatures live off sweat and bone meat.

I first began to encounter such strays in Romania, the cities and outskirts of which are home to roaming packs of dogs. The packs are a legacy of Ceauşescu, Romania’s cold war despot, who ordered rural and urban clearances to make way for his grand designs. Guard dogs and sheep dogs alike were ousted from their cages and set free to mirror the fickle terrors of Ceauşescu. They need a very wide berth (including cycling back the way you came) or a light sabre, or failing that a big stick. 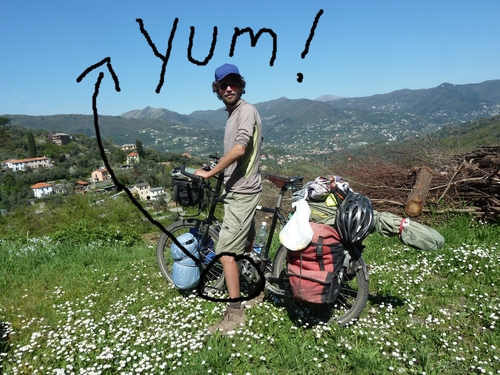 Which brings me onto how to deal with the naughty ones, the ones expelled from pet school a long time ago. There are pages and pages of forums dedicated to this topic. Defences range from the hi-tech (‘Dogdazers’ – ultrasonic dog deterrent, painful to their ears apparently) to the super lo-tech (imaginary stone held behind head). I’ve never tried a ‘Dogdazer’ but if it came to the crunch, I’d rather hit a rabid dog over the head with a stick than with a piece of battery operated plastic.

Most local folk use the stone option – stoop to pick up stone, wait for dog to retreat, and if said animal further advances, take aim and fire. This works well enough for pedestrians but for bikes more intricate tactics are required. The best advice I was given was ‘stop and face.’

Dogs, like hormonal boys, love to chase. A passing cyclist represents a cowardly foe and the more you cycle away the more they think they are the boss guy and can whoop your saddle into a puddle, or worse, take a bite. Stop, however, and the dogs themselves, mostly, stop. With teeth-baring dogs my girlfriend and I now halt, dismount, keeping the bikes between us and the animal, and wait. Side by side we look like a defiant bike monster rather than a fluffy rabbit, and, generally, they back off. It takes a bit of courage to master and seems counter intuitive, as your natural reaction is to burn tyre, but it really does work.

If this doesn’t do the job then it’s the dog stick. Now before the RSPCA start calling, I should point out that the dog stick is a defence, only to be used where it’s my integrity versus the dog’s. Essentially a big piece of wood with the threat of a wallop, the dog stick triggers the memory of previous wallops, and, hopefully, your fido backs away. I have yet to use my stick in anger, though I have heard with properly mad dogs it can be a fight, literally, to the bone.

I was given the blueprint for a more refined dog stick by Alain, a French cyclist we came across at the top of a mountain pass in Romania.  You take a slender, stiff branch about the length of your top tube and where the wood divides into a “Y” cut it down so that this part fits behind the headset or steering tube. At the other end make a notch where a piece of elastic tied to the seat post can hold. Thus designed, the dog stick can be carried out of the way but close to hand, carried along the top tube. ‘Voila!’ Alain demonstrated, whipping it up from his mountain bike like a character in ‘The Three Musketeers.’ As he went on to explain, the stick is no use stashed in your panniers or strapped to your racks, as the mad dog doesn’t wait for faffing.

I have since spent a fair few adrenaline-fuelled moments on back roads wavng my dog stick above my head like Indiana Jones (well, in my head I am a younger Harrison Ford), much to the amusement of locals. Even if it doesn’t work it certainly makes me feel better. And it definitely makes the bike look more ‘organic’, man. Other variations include a friend who cycled to Damascus with a rams horn tucked into his drop bars and the old fashioned bicycle pump (too short and slippery in my opinion, though I read that the legendary 70s bike author Richard Ballantine recommended its use as a last resort weapon of death in a graphic section on dog warfare that was removed in subsequent editions for being overly cruel.)

The ultimate dog deterrent must be to bring your own dog. Popular on the continent, dog baskets took me by surprise when I first saw one on the back of a tandem in Somerset. I have since read of a couple who toured for a year around Northern Europe with separate bikes, each with their own handmade dog trailer. This takes ‘if you can’t beat them, join them’ a bit too far in my opinion, but it would be interesting to see if such eccentricity increased or decreased the relative ankle risk in any given ride.

All this talk of dogs and bites has to be put in perspective however. Cycling is a safe and healthy means of transport. I have cycled many thousands of miles and only once been seriously worried about a bite. Most canines are “all bark and no bite” and rarely will a long distance cyclist find undisciplined, rabid or fighting animals. Don’t dismiss them but don’t let them stop you either. The road is yours to ride, and a bike will take you to the ends of the earth, far beyond their wagging tails.

Last month I had a dream where oversized dogs riding tricycles were being chased down country lanes by little rabbits. These days I always fall straight asleep after a day’s pedalling and float into such reveries. I’m too tired to be woken by dogs in distant villages.

They let me lie."

Don't forget to tell your friends and share the word about "Mind is the Ride" !