How to begin cycling to India

I've written for seventeen issues of Boneshaker cycling magazine and I'm going to regularly start posting articles from the magazine in the shed. This short piece is one of the first, written longhand on a piece of notepaper as I leant against the wall of a cramped, "Formula 1", motel in St Dizier in North Eastern France. The room was just big enough for two touring bikes and all our panniers (we were too nervous to leave the bikes outside and were taking a break from wild camping.)

"It is difficult to pack for a year’s cycle trip. If you wanted to take all the advice offered by friends and the limitless internet forums you would take a spare bike and a dumper truck of gadgets or, at the other end of the spectrum, a featherlight racing bike, a pair of see-through underpants and a Platinum credit card. The answer for my girlfriend and me lay in packing half an hour before we were due to hand over our keys to the guys moving into our house and head off on a year-long cycle ride to India from Bristol. Having stayed up all night sorting out just what we had to do with our lives, there was no time left to think about the niceties and we just rammed what would fit into our panniers.

Now we’re on the road in France and it’s easier to make sense of what we should and shouldn’t have taken. Trouser gaiters? Nope. Two pairs of waterproof gloves. Duh! A complete map of UK cycle routes. Eh? In France? No doubt as we continue on our journey to India from Bristol over the next year we will discard and accrue multiple items like magpies, each item randomly strapped on with bungies and bits of rope.

Ultimately the best advice to anyone considering a prolonged overland bike tour is to just go. Necessity, boringly, is the mother of invention and will produce whatever you need, usually late at night in a tent porch with a pair of pliers and a ziptie. 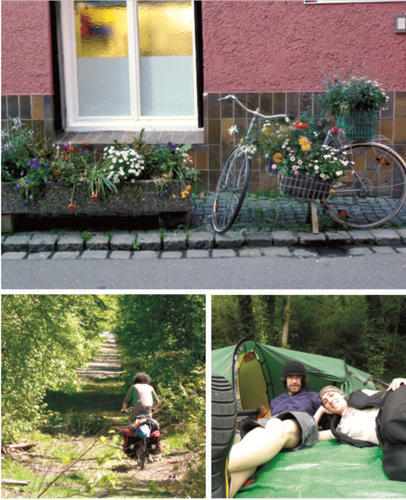 As to route planning, the main thing we did in advance was start the application process for an Iranian visa which we heard can be notoriously difficult. We didn’t get Lonely Planets or guide books, and have harvested maps, mostly, from Tourist Info. A month on and this seems to have worked. We have a small GPS and this has been very helpful, together with the Tourist Info maps, for staying off the main roads and out of the cities. Leaving our destinations to chance has meant some unexpected finds, such an eccentric village festival north of Paris and a ‘Lord of the Rings’-like chalk road winding through Normandy. If there has to be one rule for relaxed overland cycling, it must be “stay out of the cities.”

One thing I would recommend people do, whether they are cycling to Timbuktu or cycling round the block, is to read Dervla Murphy’s book, ‘Full Tilt’, the story of a young Irish woman in the Sixties who cycled to India from her home country on a single speed Raleigh via Afghanistan with a revolver strapped to her leg. After all the prattle about gear and endurance calories, this book is an inspiration for those who see the bike simply as a means to freedom and adventure.

My girlfriend and I are not bike nerds (though Jen would argue I am heading that way), we are just a couple of daydreamy folk who just want to see the world in the slow lane. Three weeks into our trip and only just approaching Germany, our daily mileage would make most Speedy McCreedys (as we call the brightly-costumed lycra-clad racers who overtake our overladen bike trucks) weep with laughter. But we are quite happy pootling along the smallest roads, thanks, and if we don’t make it to India then, hey, we’ll have had some good picnics along the way. And boy, are they mighty picnics. I’ve never eaten so much in my life. The legs are emissaries of the stomach and it’s ‘munch, munch, munch’ all day long. Pastry, pastry, pastry.

The bike itself is a highly evolved extension of the legs and has suffered the same aches and pains as the body but with more audible twangs. Talking of which, I currently have a twanging sound in the front wheel hub but I’m sure the Vorsprung Germans will sort out that for me... when, of course, we eventually get there..."