My Mother, the Bearded Lady: The Selected Letters of Miles Kington

A hilarious collection of correspondence

We are delighted to report that we have added a brand new reward to our panoply of delights: a CD containing the last recorded interview Miles gave.

The broadcaster Tony Staveacre has kindly offered the recordings to help support our aim to get this volume of Miles' letters funded and published. Here's a short introduction to the CD from Tony:

For a man who wrote at least 800 words nearly every day of his life, Miles Kington was always reluctant to write anything about himself. He boasted that one of his hobbies was laying false trails for nosy biographers; and his only attempt at autobiography had evolved of its own accord into a marvellous fiction – the book, Someone Like Me, which was published in 2005 and caused real confusion to booksellers, who didn't know where to put it.

So it was his wife Caroline's initiative, just before Christmas in 2007, to invite me to bring my tape recorder to their home near Bath, and persuade Miles to talk into it about the main events of his own life. He was already very ill with pancreatic cancer, and there were things he needed to do, while he still could. Creating the structure for a bona fide biography was one of them, and talking to me would be easier than typing. I'd known Miles for nearly 20 years. We worked on many radio programmes together: he – a witty and knowledgeable writer/presenter, me – a pedantic, old-school producer, who didn't share Miles's penchant for spontaneity and last-minute deadlines. It took me a while to recognise that Miles couldn't deliver, unless he was really up against it. Was this to be one of those times?

Our first session was 11 January, in the afternoon. He gave me a hug when I arrived, but I was shocked to see how frail my friend had become, and my eyes will have hinted at my dismay. Anyway, I set up my microphone and tape machine in the snug parlour of Lower Hayes (a house where Nelson once slept) and we went to work. Caroline had suggested some topics for our conversation, but she'd gone to the shops, and we'd forgotten what they were. A train buzzing along the branch line at the bottom of the garden gave an appropriate starting cue for our first session.

And then the conversation begins... 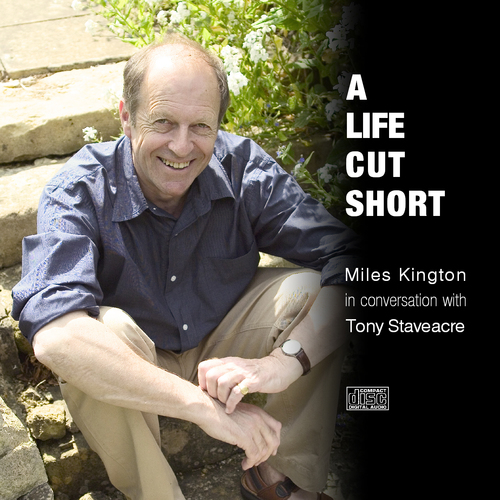 The CD forms part of a new reward level. For £50 you get the CD, the hardback and the ebook and your name in the back of the book. If you have already pledged for a lower level and want to upgrade to the CD then you do that via your account dashboard. Or, you can email georgia@unbound.com and she will sort that out for you. If you have pledged for a higher level but want to add the CD, then we can do that for a small extra donation and Georgia can sort that out too.

Anyway, we hope this new addition proves of interest. And thanks again for all your support so far.