Tom Thumb has been captured!

There have been important developments in my relationship with the mice here in the Au Diable Vauvert writers' Résidence, after I was woken (again) a couple of nights ago by the bizarrely loud sound of Tom Thumb trying to gnaw his way into a bag of pasta.

I got up to investigate and when I switched the light on and removed said bag from its shelf, instead of running away Tom sat there absolutely stock still, either because he: 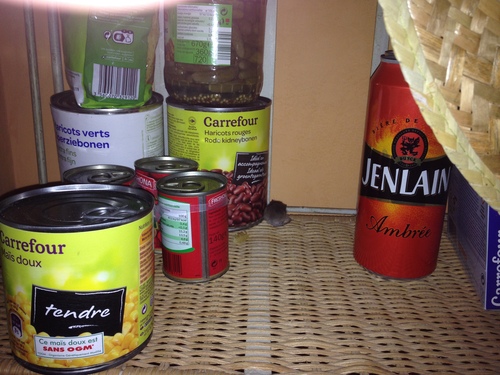 The result of this strategy was that I did indeed catch him. Just picked him up by the scruff of the neck and popped him in to the plastic basket used for the recycling: 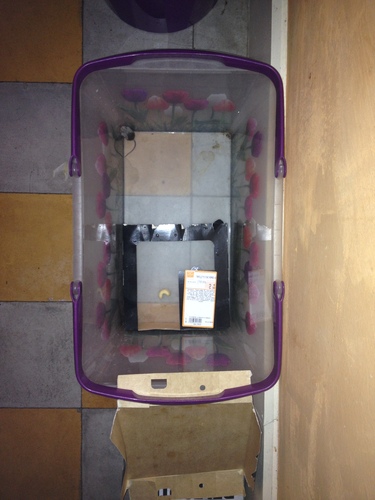 That, as I say, was a couple of days ago. I've put an empty cardboard box, some food and water, and some rolled up bits of paper in there for him to make a bit of a nest out of and he seems ok, though clearly he'd quite like to get out (he does periodically try and leap up the side of the basket, but it's just a few centimetres too high for him to scale).

But I'm now in a quandary. The plan is to catch Hunca too, reunite them, and put them out in the garden together. But of course I can't catch Hunca (humane mousetraps have yet to be located in the local town). I've set up a kind of trap (a tipped over bucket with some cheese at the bottom, the idea being I'll be around when she's in there and so able to scoop her up), but she keeps nicking the cheese when my back's turned.

And as a result I'm starting to feel bad about keeping Tom in captivity. What if:

I don't see a win here. I'm beginning to think I should just let Tom go and leave it to the publishers to sort out when I'm gone. Which will probably involve calling the local pest controller who will put poison down. And then there will be no romantic way out for Tom and Hunca and any babies they may or may not have.

Of course, I may be completely wrong about this. There may be many more than two mice. The whole damn place might be infested with the little varmints (I have heard a worrying amount of behind-skirting-board scurrying), and it's just that I've only ever seen two at once. In which poisoning would too good for the little horrors.

Arrgh. What should I do? Please advise.

Oh, by the way, in the midst of all this I have been getting on quite well with the book...