The untimely death of Tom Thumb

Folks, I have a sad, sad story to tell. Really sad. Brace yourselves.

It was all going so well. As related in my last post, following the fire and the release of Tom Thumb I spent last Sunday afternoon in Aigues-Mortes with my friend and the French translator of The Book of Ash, Alfred Boudry. 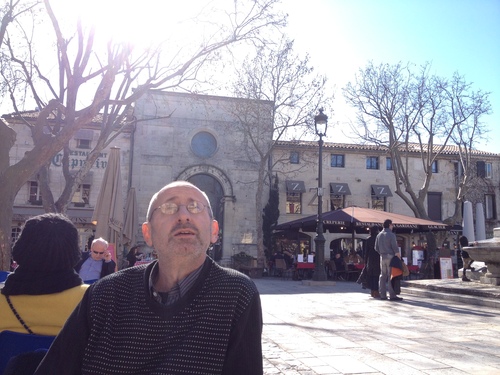 Aigues-Mortes is an interesting place. It sits in the middle of salt marshes, and has been a centre for salt production since the Neolithic period. Baleine salt (the one with the whale logo) comes from here. Those big heaps you can see on the horizon in this picture? That’s salt. 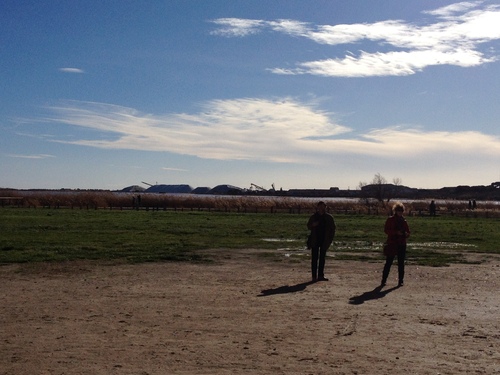 The town itself is a fortified jewel, its first tower built by Charlemagne in 791 and the subsequent walls and turrets completed by Louis IX and his son Philip the Bold in the 13th century, who used it as a garrison and launchpad for two major crusades. A bit later, in the 14th century, it was used as a prison for the Templars. Alfred himself was involved in telling the story of this slice of history: as a student he took part in huge dramatic re-enactments, audiences out by the salt marshes, lots of guys in Crusader-garb charging around and scaling the walls, until he got too close to some of the horses and discovered an asthmatic allergy so severe that he had to be stretchered off for real. 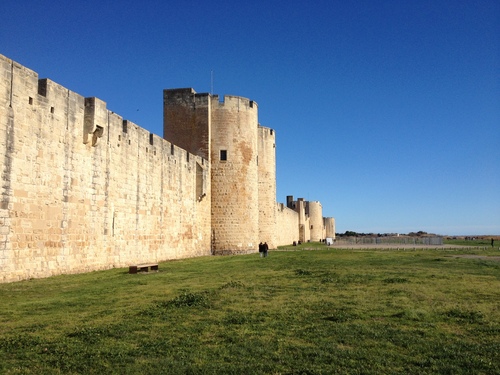 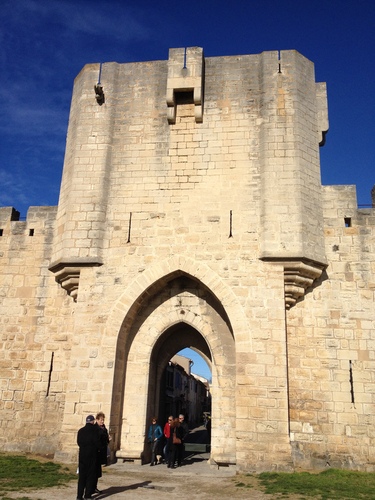 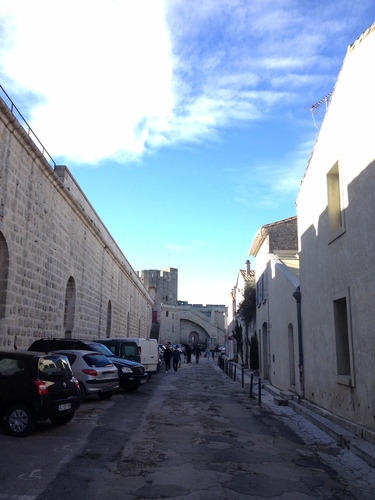 Nothing so exciting happened the afternoon we visited. We just drank mint tea in the square and wandered round the pretty streets for a couple of hours. Then it was back to the now cleaned-up résidence and, for me, back to work. Having lost a bit of time and quite a lot of energy to the fire I needed to crack on with Midland.

This I did, in an atmosphere even more peaceful than previously now that my neighbour Pierre, his room trashed, had had to go home. The second night after the fire, however, I was woken around three a.m. by the sound of the humane trap I’d set going off, followed by a fair amount of rattling and squeaking.

Ha, I thought. I’ve already recaptured that pesky Tom Thumb. But I was too tired to get up and do anything about it, not least because I hadn’t organised anything to transfer him into. So I went back to sleep.

But when I got up in the morning the trap was empty, the cheese in it all gone. I forgot to take a picture of it, but it was a simple design - a long narrow mesh cage with a bait-loaded trigger at one end that released a powerful spring-door which closed off the entrance at the other.

How that mouse had managed to eat the cheese, release the door and escape I had no idea. Had he squirmed his way out of the side of the door, pushing back against the spring until it was open a crack? It did look just about plausible. Or had he eaten the cheese so carefully that the trap, disturbed but not sprung, had only released itself once he’d exited? It was impossible to know.I reset the trap and got on with my work and didn’t think much more about it. Whatever had happened it must have freaked out little Tom because I didn’t see anything of him or Hunca for the next few days, though the occasional scrabbles I heard behind the skirting boards betrayed their continued existence. Presumably they’d discovered Pierre’s room, shut off complete with all contents - including quite a bit of food - pending the arrival of the loss adjustors from the insurance company. 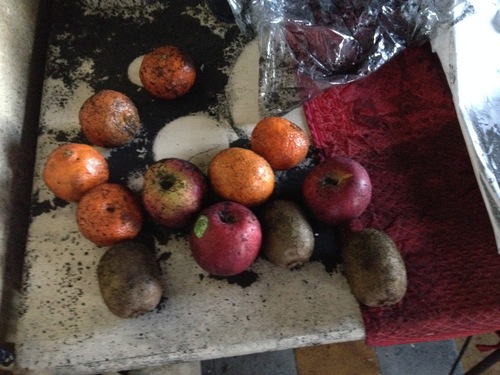 Towards the end of my final day I went out for my customary run down by the nearby Grande Motte canal, the one that leads, straight as an arrow, all the way to Aigues-Mortes. It was a particularly beautiful afternoon, the light like a golden filter over the marshes. I took this picture from the window by my desk, then got up to change into my running kit. 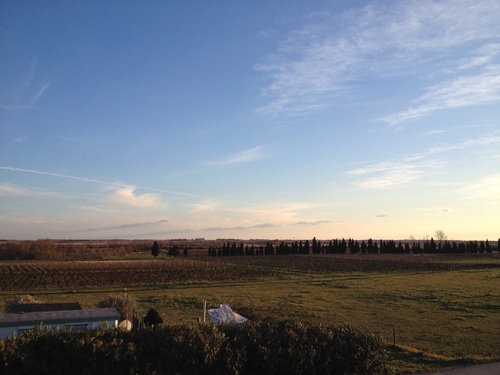 That’s when I saw Tom Thumb sitting on the floor by the fridge. I tiptoed closer but he didn’t move, crouching motionless like he had the first time I’d caught him. So I bent down and picked him up and popped him in the plastic basket I’d prepped since the night he woke me up, so that if that he’d sprung the trap again I would be ready.

He didn’t protest and just sat where I put him. There was something wrong with him, for sure. I gave him a cashew nut and some water, put an empty loo roll for him to hide in if he felt like it, and went out for my run.

I ran straight into the setting sun as it threw the most intense maroon cast over the landscape, just like the photo I included from thirteen years ago in my first post. I was in a good mood. The end of the book was very very close, the new material and new structure I’d put into place the previous week seemed to be working, and Midland funding campaign had now reached 10%. Despite the fire, the retreat had been a success.

Then I got back to my room, unlocked the door, and came into find that Tom Thumb had crawled inside the cardboard tube and died there.

I took him out and put him in a plastic food container so I could take a look at his body. 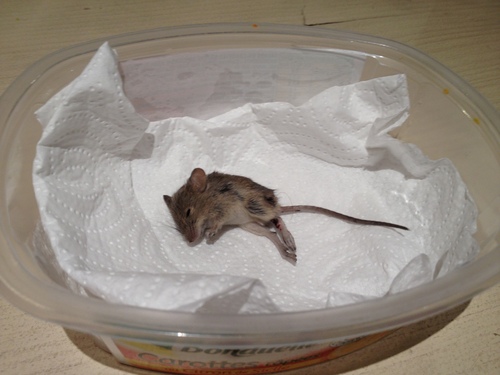 There was clearly quite a deep wound on the back of his leg, which looked healed and yet was flecked with fresh blood. Had he been caught by the trap’s door as it came down, and died from the injury? It seemed quite likely. But the wound looked old, and I’d noticed him pushing his leg out to one side as he’d run about the week before. Still, I couldn’t think of another explanation for his just suddenly keeling over like this, and I was very upset by it. My little résidence pal, who just a few days ago had been nibbling on cashew nuts I’d put out for him and running up my trouser legs, had been killed by my over-complicated efforts to care for him. If I’d just put him outside when I’d first caught him instead of trying to catch Hunca too, then he’d be alive now, if lonely. I put him in the fridge and worked late into the night, then went to bed, feeling very unhappy.

I woke up before dawn still thinking about him. Needing to get as much work done as I could before packing to go home I got up, made some coffee, and opened the shutters. It was still dark outside but there was the most vivid view of Venus over the marshes, lit to incandescence by the sun rising behind it. 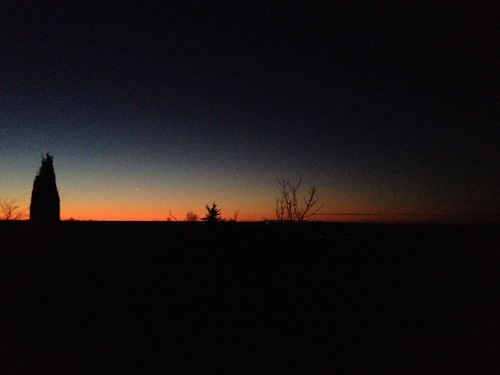 I switched on my computer and cracked on with my edit for the next couple of hours, looking up occasionally to chart the progress of the morning as it broke across the Petit Camargue. Fresh coffee was eventually required and when I went across the room to make it I had another surprise. There was Hunca Munca, sitting motionless on the kitchen floor, not far from the spot where I’d found Tom Thumb the night before.

It was almost as if she’d come to look for him. But she was clearly sick too. She didn’t move as I approached and I picked her up as easily as I had her partner and popped her in the plastic just I as I had done with him.

This wasn’t about getting hit by the trap. These little mice had clearly eaten something they shouldn’t. Had they been in Pierre’s room, and made ill by residues from the fire? Or had they made their way into the roof space, where we’d put poison down for whatever it was we’d heard moving around up there, and eaten that? The poison may well have acted as a decoagulant, explaining why Tom’s old wound had reopened. Perhaps it had been them in the roof all alone, the plasterboard amplifying the taps of their tiny claws like the skin of a drum? It didn’t seem possible, but I remembered having mice in the roof of my house in London some years before, and thinking at first they were rats by the extraordinary noise that they made.

Fire or poison I just didn’t know, but Hunca was fading and was not looking like she’d recover. I took Tom from the fridge and put him in the basket beside her so she’d at least know where he was, and she lay next to him while I shut down my computer, packed up my stuff, and tidied the room. 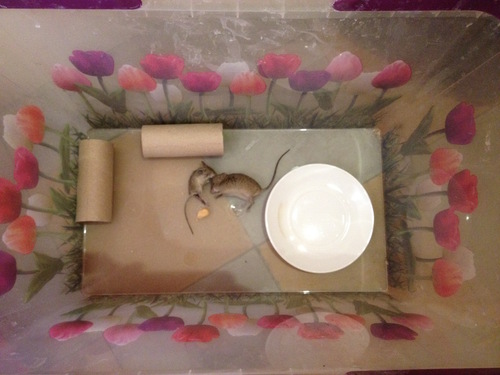 Hunca passed away at two minutes past twelve, literally as I closed the clasps of my suitcase. I was absurdly upset. I felt almost like I’d just lost my own children, and flung tears around as I gathered my last few belongings and organised some of kind of hasty mouse funeral. 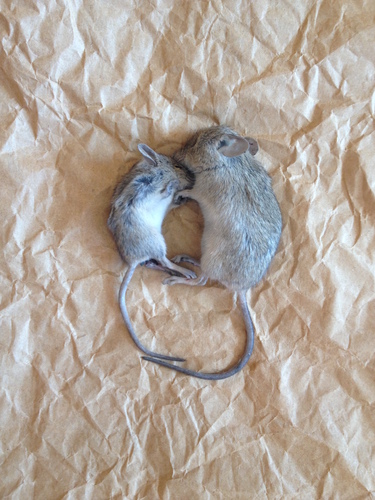 So my final hour at the résidence was spent burying Tom and Hunca in a shady spot in the corner of the little Au Diable garden. I put them in a metal coffee canister, wrapped in the paper wrap from a baguette and sealed in with a message about their contribution to my book in case one day, in years to come, someone digs them up. I made them a makeshift cross out of a couple of sticks to mark the spot and as a final token put the last cashew nut I’d given them, the one they’d been too sick to eat, on the top of the small mound of earth that now covered them. And then I got in the car and made the trip to Montpellier airport, feeling devastated by the loss. 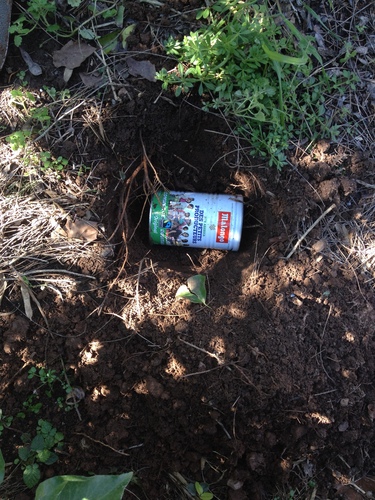 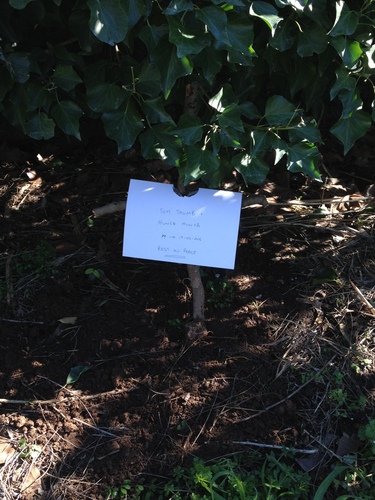 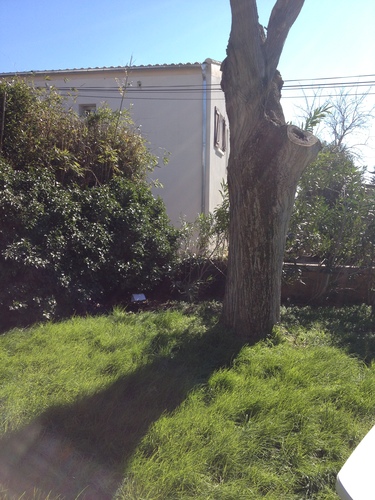 Crazy really. Two mice, who would almost certainly have been poisoned or trapped non-humanely within a few days of my leaving in any case. I think what upset me most was the whole tiny tragedy of unintended consequences, the remorseless playing out of a disaster despite so many heartfelt efforts to achieve the contrary result. And what was very strange, and particularly disorientating, was the peculiar way in which this little saga with the mice mimicked in miniature the very plot mechanic I’d come out to France to write out - the climax of Midland.

I’m going to say no more about it because I don’t want to spoil it for you, but if you enjoyed and were moved by this tale of Tom Thumb and Hunca Munca, I think you’ll enjoy and be moved by my book.