So long Lord St Germans and thanks for all the fests 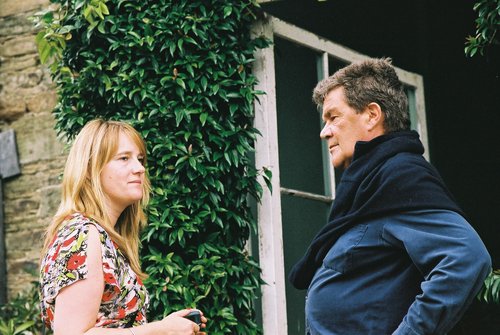 Sitting down this morning to write a Shed post about my forthcoming reading at next week’s Port Eliot Festival, I ran a search so I could include a few salient details about the event. What I didn’t expect was for the search results to be headed by the Telegraph’s obituary for Lord St Germans, aka Peregrine Eliot, aka Perry, the festival’s co-founder and host and - I’m proud to be able to say - my friend.

Midland would not have been written without Perry and his wife Catherine Wilson, aka Lady St Germans, aka Cathy [pictured together, above]. They invited me to the inaugural Port Eliot event back in 2004, around the time The Book of Ash was published. When that novel failed to earn me any kind of a living and I had to take a job at the Telegraph to support my young family, their belief in literature and repeated invitations for me to return to the festival every year helped burnish my determination to keep working on the book however little time I had, and however difficult it was.

For three years I even ran a venue at the festival - the film tent - where we hosted such luminaries as Mike Figgis, Kevin Allen and Rhys Ifans. We even ran a short film competition for films made on-site during the fest itself, though that nearly hit the buffers when the slightly staid tech crew I brought down from Birmingham to help contributors edit their footage nearly left in outrage after seeing a leather clad gay S&M cabaret act whip each other in broad daylight on the lawn in front of the main house. 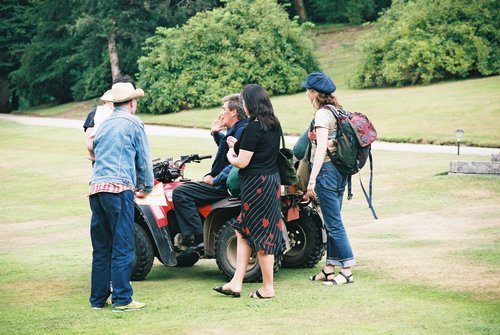 Perry found this kind of upset hugely amusing. He’d seen it all before of course - many of his favourite stories concerned the excesses of the Elephant Fayre, the Port Eliot Festival’s predecessor, whose antics made ours seem genteel by comparison. And after all that’s what the festival was - and is - all about: juxtaposing people and art in unexpected and challenging ways. Through rain, shine, success and disaster he cruised through the ground in his slippers or astride his quad bike [pictured, 2004], beaming at everyone, encouraging us all, drinking deep from the wellspring of energy he’d created.

I think it sustained him, kept him going through multiple health issues, operations and transplants. He was a doer, Perry was. He wanted to make things happen, see resources used. During the long, frank discussions we had when he and Cathy invited us to visit soon after my father died, he told me that for a long time after he had inherited the Port Eliot estate he’d felt it was a weight around his neck, dragging him down, and for many years he’d tried to escape its crushing burden. But in the end he found that the way to deal with the burden was to open it up, to make it available to others, to share it, which is precisely what he did with the Elephant Fayre, and latterly, with the Port Eliot Festival [which grew quite a bit between 2004 (below top), and 2015 (below bottom)]. 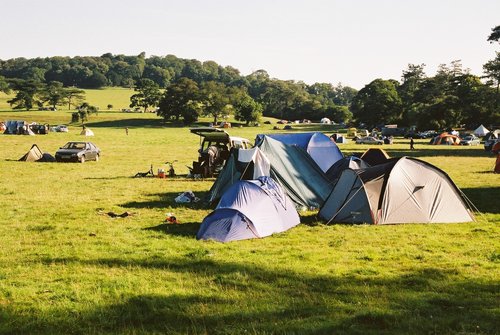 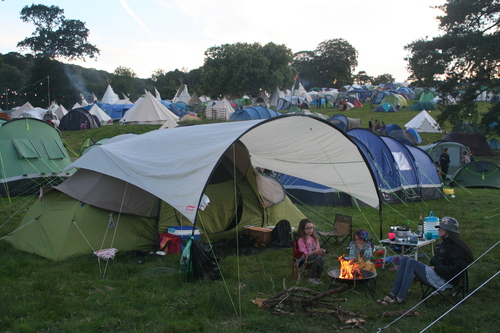 Midland itself, a novel about families, came partly out of those discussions with Perry. My wife Robyn and I were with him the awful Sunday morning when the police came to the door to give him the news that his son Jago had died. It’s the only time I’ve ever witnessed a parent being told of the death of their child, and I hope it is something I never have to see again - it truly is the worst thing in the world. I remember Perry physically crumpling as if hit in the chest by a crushing blow - the comparison no simile but a literal description. But despite the overwhelming grief that he felt, within minutes he was up and dealing with the situation, preparing the house for the arrival of extended family, making sure that all the cogs kept turning, that the rusty, crumbling but still magnificent machine that is Port Eliot cranked on.

Within a year Robyn and I were asked back to visit, which is when Perry helped with wisdom and insights in the wake of my own father’s death - an event that happened to coincide with the birth of my first child, so an epochal time for me. And he and Cathy kept inviting us back, every year since then, to read the next installment of Midland at the festival. Each year I’d joke with Perry that I didn’t think I’d ever finish it, and each year Perry would tell me to keep on going, that in the end I'd get it done. And he was right: in the end I did. He and Cathy pledged for a copy just a month or two ago, as I knew that they would, because that’s the kind of people that they both are: generous, and loyal, and passionate, and true.

So, yes, a week on Friday I’ll be reading from the (almost) finished manuscript of Midland in the Walled Garden at Port Eliot at 10 a.m. If you’d able to join me I shall be dedicating the reading to Peregrine Eliot, safe in the knowledge that many of my co-performers will make the same gesture for similar reasons, and although Perry won’t be standing, unobserved, beneath the boughs of the nearest shady tree quietly listening, or zipping around on his quad bike making sure that the campsite has water and that the Park stage has electricity, he will in fact be everywhere, all the time, all at once, personified by the festival that was, and remains, so much an expression of his and Cathy’s extraordinary personalities.

Hey Jim, was sad to read of Perry's passing. I've never been to the Port Eliot festival but I used to love the Elephant Fayres - they were the best. At the beginning of my Wild Hare Club blog on the nascent Campfire Convention there's about how I met Heathcote Williams at one of those festivals back in the 80s when we ran a food stall selling cardamom and orange ice cream...Fancy doing a guest blog/coming to Hereford for a WHC book club evening or something after the summer? Hope all's coming together in the final stages with the book, Richard

Thanks Richard - will check out the blog about Heathcote. And yes, would love to do a guest blog and/or attend a WHC book club evening. Will email you! xx