Over Easter I was back in Warwickshire visiting my mother, who still lives a country mile from the house in which I was born. Her nearest corner shop is the village stores in Wilmcote, a five-minute drive away, and the shop stands right opposite the family farm of Shakespeare’s mother, Mary Arden. This is now a very slick “living museum” filled with blacksmiths and falconers and cooks and musicians, and is a real favourite with my two daughters, who love the powerful sense it provides of stepping back in time.

In the video above you can see them on the farm learning to herd geese to market, which would have been a common sight in Shakespeare’s day - so common that geese were provided with little cloth booties to protect their feet as they scurried, honking enthusiastically, down the hard stony lanes.

Last week saw the 400th anniversary of Shakespeare’s death, of course. You know that something is a big deal when an entire episode of Countryfile gets devoted to it, and the sight of Adam Henson driving a flock of sheep down Sheep Street to illustrate the Bard’s connection to the wool trade gave me nostalgic pangs for my home town that I don’t often get, especially when a montage of local shop fronts showed the sign of the Vintner, a bar in which I used to drink.

The Vintner features in Midland, and one of the climaxes in the book takes place just opposite, on the corner of Sheep Street, directly overlooked by the statue of Shakespeare that was presented by David Garrick at the time of his Jubilee in September 1769 and which is set into a niche in the first floor facade of the old Town Hall. 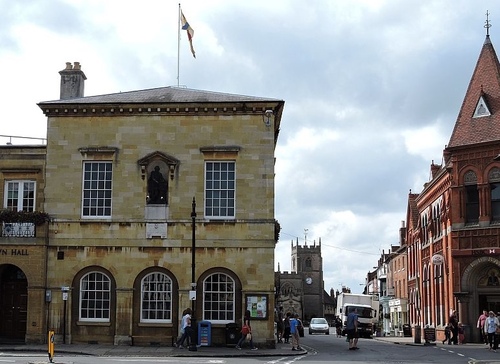 (I don't have my own photo of this so I've filched this from here, with apologies)

The decision to stage that scene beneath Will’s watchful gaze was a nod to the influence he’s had on the book and indeed, on me. Growing up in Stratford-upon-Avon, wanting to write, it was impossible to escape Shakespeare’s influence. He was one of the main reasons I became a writer in the first place. What greater role model, what better local hero, could I have had?

My parents were big fans of the theatre and involved with the Shakespeare Birthplace Trust, which brought it all even closer to home. My music teacher played in the theatre orchestra; when my mother decided to surprise my father by commissioning a portrait of my sister and I it was to local artist John Collins, a theatre set designer, that she turned. For several weeks Mum whisked us off on secret missions into Stratford, where we sat for John amid jumbles of props in the back of the RSC paint shop, a chaotic, Bohemian environment suffused with the pungent stench of oil paint. When my parents needed to let out a property they owned they let it to actors, including - if memory serves - a young Iain Glen, now one of the stars of Game of Thrones. When they needed to rent a house for a period they moved us to one that had just been vacated by Jeremy Irons, in Stratford for a season. While I was at University my father’s firm of Birmingham solicitors, Duggan Lea & Co., merged with the firms Bettinsons and Shakespeare & Vernon and the new entity adopted the name Shakespeare’s.

Shakespeare was therefore a part of scenery of my childhood, somewhat less exotic than EastEnders, which I watched avidly for clues about the London life I was so desperate to live. The fact of him was simultaneously inspiring - this is what some kid from Stratford had managed to achieve - and demoralising - how could you even begin to measure yourself against a talent so prodigious, especially after it had been magnified and elevated by the efforts of an entire industry?

My undergraduate degree complete I made a bid to start a life in the United States. After a precarious year living on my wits in New York studying music and working on the novel that would eventually become Habitus I won a place to study Philosophy and Literature at the New York School of Social Research. Alas, the funding to pay for it never came through and I found myself back in the UK instead, taking an equivalent, rather more affordable (and as it turned out quite excellent) course at the University of Warwick.

My bid for freedom over, here I was back in Shakespeareland. The funding hadn’t worked, the novel hadn’t worked, the music hadn’t worked; there seemed little else for it but to go back to my roots and start again. Looking for some new perspectives I read the sonnets for the first time, an experience that changed my understanding of both Shakespeare and of poetry. Each one a Byzantine nugget of thought, self-reflexive and involuted as actual consciousness, taken together they painted a portrait simultaneously completely alive and tantalisingly incomplete, and they changed my understanding of what language could achieve.

Never one to do things by halves, around the same time I began going out with an RSC actress, a relationship that would dominate my twenties. She did several seasons with the company, first in Stratford, then on tour, then at the Barbican. At one point she understudied Titania, and she got to play the part for real when the lead was taken ill, which gave me the opportunity to fulfill a major male fantasy - that of delivering flowers to the stage door on the night of my girlfriend’s headline performance.

I was writing hard by this point. Habitus was taking finally shape and thanks to that girlfriend (still a great friend, and currently Midland’s most generous pledger) I was exposed to a great deal more Shakespeare, in particular the history plays, than I would probably have got around to seeing on my own. But I still hadn’t found any real point of creative engagement with the playwright.

Because where is Shakespeare’s language now? Our culture is drowning in words but where are they used to express pure psychological and existential states as they are in the mouths of Shakespeare’s characters? In novels sometimes, yes, but not that much since Joyce. In plays sometimes, too, but not that much since Beckett. Hardly ever on screen, where facial expression and cinematography have replaced language as the mechanism for capturing and communicating psychological nuance, with occasional notable exceptions such as Dennis Potter or Quentin Tarantino. The tide of realism that swept over the late twentieth century has led us away from the Shakespearean form. Perhaps only rock, rap and hip hop have swum consistently in the other direction, the lyrics of Bob Dylan, David Bowie, Dr Dre, Eminem among the few places where language still gets to play as it did in Shakespeare’s day.

So it wasn’t really till I’d written another two novels and was taking a screenwriting course at London Metropolitan University that I found myself, for the first time since I’d tried (and failed) to stage King Lear as a schoolboy, thinking about Shakespeare’s plays from the inside. I put aside the bard's scintillating linguistic surface for a while and started to think instead more about the structure of his plays. I had made several attempts at trying to write screenplays trying to fit the three-act structure that was all the rage among screenwriting gurus at the time but couldn’t get the dynamics to work in a satisfying manner, and it was by going back to Shakespeare and looking at his five act arcs that made me begin to feel that the three act formula - really four acts, with the long central act split by a mid-point - was actually missing a beat.

It was at this moment that I began to write Midland, conceived from the outset as “novel in five parts” in order to allow myself to interrogate that structure and try to uncover the dynamics that powered it. And so what I think of now as my Shakespearean novel began to take form: set in and around the villages that he and I both ran in as children, transfixed by love doublings and misunderstandings borrowed from Midsummer Night’s Dream and Twelfth Night, overshadowed by the death of a patriarch not unlike Lear, struck through with the mercantilism of The Merchant of Venice, and strewn with the weeds and flowers of Warwickshire like all the Bard’s work - as catalogued in a little book called Shakespeare’s Garden that my father had given me as a boy and which I’d dismissed as boring and put aside, unexamined, for decades, until suddenly one day it was the thing I woke up most needing to read.

So happy birthday, happy deathday, dear William. Only 52, and look at all you did in that time. Though one thing’s for sure: a play takes a lot less bloody words than a novel - it was a good move to stick to iambic pentameter, given that you were working only with candle and quill. Thank you for all the insights, the imagery, the props and the girlfriends, the keys to the structure of thought. You didn’t cast a shadow, you let in the light, and my writer’s life will have been well lived if I’ve managed even in a small way to help carry your torch.