Progress report... and moving to Medium

as you may - or may not - have noticed, I haven't posted on this blog for a while. That's partly because the work on Midland is now tailing off. The book is now funded, of course, so I've less reason to bang on about it, and as you'll know if you read my last post, I put the finishing touches to the final draft at Christmas. Over the last couple of months the Unbound team have therefore been easing the book into the slow publishing production cycle, which has involved a copy edit (now done), some decisions on the font and text layout (also done), and the beginning of work on the cover design (not yet done, but I'll keep you posted).

The next step will be the page proofs, which is when I get to read a dummy version of the actual pages as they will be sent to the printer, and get a last chance to pick up on any mistakes. Then, once the cover is approved, the hardback will go to press, and those of you who've pledged for one will, I hope receive it around about October. After that the process of page proofs and cover design will be repeated for the paperback, which is due to hit bookshops in January.

And what will I be doing all of this time? Not writing very much, that's for sure (though I do have a thing or two up my sleeve on that front). Nearly all my waking hours are currently being taken up with the launch of the healthcare messaging app Hospify, a project I started a few years back with two surgeons, Neville Dastur and Charles Nduka.

Hospify has been a slow burn, but with new data protection regulation arriving in May and the Facebook/Cambridge Analytica scandal waking the world up to the importance of personal data security, things are really taking off. The company's trials in the West Midlands with Unison Healthcare and Birmingham Community NHS Trust, which I've mentioned before in this blog, are going great guns. And in an unusually fortuitous piece of good timing, about six weeks ago Hospify was offered a place on the prestigious Wayra Velocity Health accelerator programme in London, as a result of which we are now working with Telefonica, O2 and MSD. So that's all very exciting.

As it's not really appropriate for me to bore all you loyal Midland supporters with tales of my adventures in the wacky world of compliant health chat, I have started a new blog on Medium where I can talk about that at a safe distance. I kicked it off last week with my first post, Move Slow and Fix Things, and those of you who are interested are welcome to click on the link and check it out. 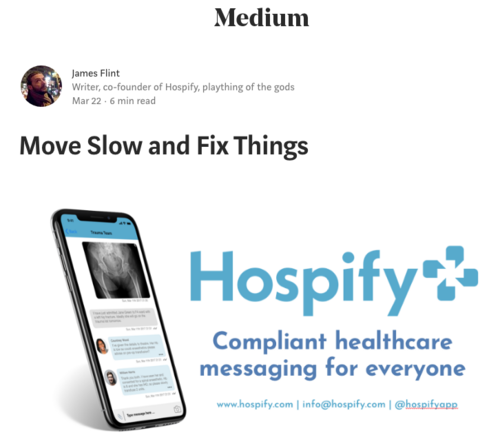 For the rest of you, the ones who'd prefer to stick to purely literary matters, I'll post the occasional update here about Midland so that you're aware of its progress, but beyond that I will for the most part now be making space for the book to speak for itself.

Have a great Easter, thanks again for your continued interest and support, and talk soon.