Midland's off and running... to the south of France

Thank you for being my first group of funders and for getting behind Midland with such generosity and enthusiasm. As of today your pledges have put me at the 7% mark. The campaign has now been going for seven days, and as I've been told by Unbound that 1% a day is a good target to aim for, this means WE'RE ON TARGET!

I saw we, not me, because we're in this together. Unbound doesn't keep your money and you don't get your books if we don't reach 100%, so it's in all of our interests to get to the finish line. And in this 21st century variety of art-based spectator sport, you get to watch as I try to steer us across it. If you can help at any point by telling your friends the fun of watching me toil they’re missing out on by not having pledged, please do.

As you’re probably aware, Midland isn’t actually finished yet. Ten years of spare-time toil hasn’t quite been enough to knock the thing on the head. It still needs an ending and an overall polish, and although I know what I want to write, knowing it and doing are two different things.

In order to get the required focus to put thought into action I’m leaving on Monday for a small town called Vauvert situated almost exactly halfway between Montpellier and Nîmes (should I use the circumflex here? I'm no longer sure).

Outside this town is a farmhouse, and this farmhouse is the headquarters of my French publisher, the appropriately named Au Diable Vauvert. The company takes its name from a slang phrase that has little to do with the town but rather translates as “miles from anywhere” with slight overtones of the English “beyond the Pale”, though without the political connotations of troublesome Irish insurgency.

Au Diable is (sort of) the French version of Canongate. It has published me since Habitus and done a very fine job of it too.

Its offices are on the ground floor of the aforementioned farmhouse, to which its founder - shock-haired enfant terrible Marion Mazauric - moved them as a sort statement about Au Diable’s intention to forge itself an identity independent of the cosy world of the Parisian publishing establishment (well, that and the much lower house prices and much improved commute). Here's a pic of Marion in her offices talking to the incomparable Christophe Claro, one of France's foremost writers and translators, who introduced me to Au Diable after reading Habitus - and went on to translate the book as well. It was largely thanks to his passion and enthusiasm that I was ever published in France at all. 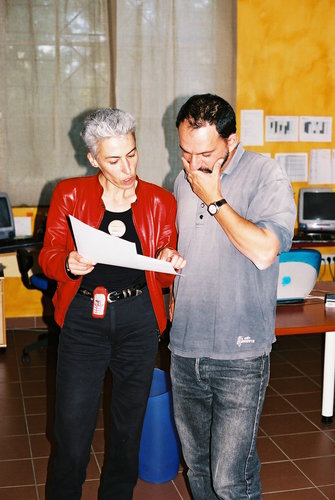 So, on the ground floor are the offices, and on the first floor are two studio flats which are offered gratis to writers who need time and space to put their feet up, ahem, I mean work really hard on their books. 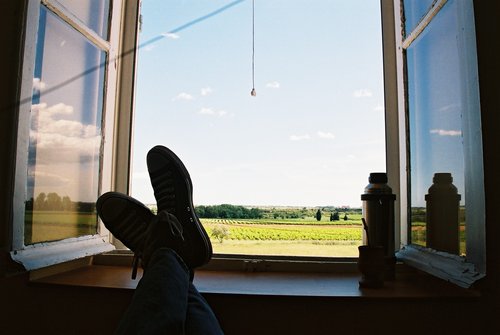 I’ve stayed at the Résidence, as it’s called, on a couple of previous occasions. This shot was taken through my window the last time I was there way back in 2003. I wrote a big chunk of The Book of Ash there (or Electrons Libres, as it was called in translation, a title I’ve always thought rather better than my English original). 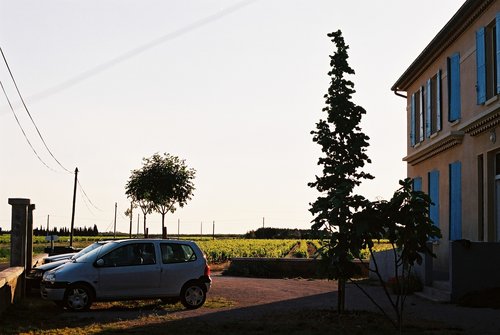 This is the exterior of the building. You can tell it’s 2003 because I was still shooting on film, hence the large diagonal smudge on the negative.

It’s a lovely place, but the Cote D’Azur it is not (I’m now really confused about this circumflex business. Côte or Cote?). Between Vauvert and the coast lie the famous marshes of the Camargue, and as you write you get to gaze out of your window over this landscape of rushes and reeds, largely featureless save for the flocks of flamingoes that periodically swing in to feed. 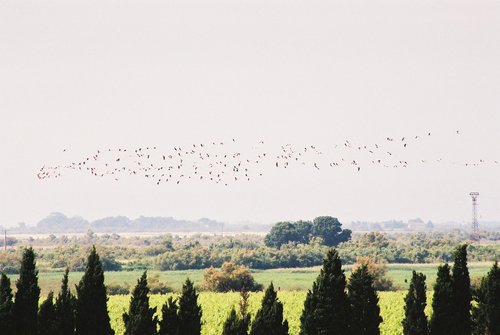 That’s to the south of the Résidence. To the north, east and west are almost equally featureless fields of vines, source of a wine that’s about as flat and hard as the environment from which it’s extracted. Besides the farmhouse, and the small hamlet it is part of, there are almost no other houses as far as the eye can see. I remember describing the experience of staying there to someone back home after returning from my first visit as like spending two weeks sitting on a sheet of graph paper. And that’s pretty much how it is. Although no account would be complete without mention of the real rulers of the marshes, the mosquitoes, which travel in roving swarms and will drain you dry if you to crack from the isolation and attempt the 7km stumble to the nearest café-bar.

The mosquitoes are loved by the locals, however, as they keep the tourists away, making sure the area remains slightly out of time, like the France I visited with my parents as a child. And it is a timeless place, where different eras seem to coexist. The nearest towns are the aforementioned Nîmes, whose Roman amphitheatre is still used for bullfights; the medieval walled wonder of Aigues-Mortes, situated at the confluence of some extraordinary industrial canals; Vauvert itself, a peculiar microcosm of the cultural tensions so present right now in the France as a whole; and the lovely Arles, crucible of Impressionism and site of Van Gogh and Gauguin's Yellow House. There’s a reason those artists were drawn to this area. There is definitely something about it. Although the main thing was probably the light. 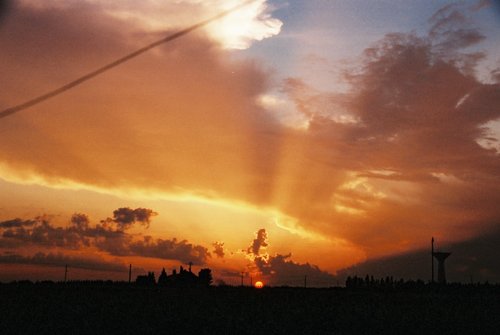 Fortunately I’ve done the tourist thing there previously as I doubt I’ll be getting out and about much on this trip - I’ve got too much work to do and not much time in which to do it. But I’ll try and write a couple of posts about some aspects of the place while I’m there, to give you a better flavour of what it’s like.