The Shed has been quiet for a while. This is because I’ve had my hands full of late with my new job, Head of Insight at a financial and business news start-up called Curation Corporation, and cranking out stories on the future of technology every day has kept me away from blogging. But my 50% funding level is in sight, and if I’m going to hit that by Christmas (which would be nice), I need to get on it. So to that end I thought I’d write something about… my mother.

Some of you will know that my mum, née Marie Cooper, is an accomplished pianist, who began her career playing for the BBC. And in one of those peculiar coincidences that life is so fond of chucking at us, I recently discovered that over forty years ago she too had been involved in a creative project with “Midland” in the title.

Earlier this year my wife unearthed a recording of one of mum’s early sessions on the internet: performing “Midland Melody” with the BBC Midland Light Orchestra on the Light Programme, 7 December 1963, which would have been just two days before her 21st birthday.

The clip is attached as a sound file, so you can hear Marie Cooper and her duet partner, Rosemary Brett Davies - with whom she played throughout her life and who later became my godmother - performing “Midland Melody” with the Harold Rich Quartet and the BBC Midland Light Orchestra, conducted by Jack Coles.

Radio was different then. For one thing musicians were paid - in actual money, not just in airplay royalties or Spotify ad share revenues. The Musician’s Union was still a powerful force in the land, powerful enough to enforce something called the “Needletime” agreement which severely restricted the amount of records that the BBC was permitted to broadcast in any given period of time.

In order to keep music flowing over the airwaves, the BBC therefore had to employ all variety of bands and orchestras to play live in their studios multiple times every day. Live performances were thus a staple of radio listening, and provided financial security to a thriving class of musicians up and down the country. You can read more about this era, and the role of the BBC Midland Light Orchestra in it, here.

Despite being taught clarinet and saxophone by one of my mum’s friends from this era, a wonderful woodwind player called Lesley Cawdrey whose son Julian is now a leading flautist, I was never more than a middling musician. Whatever talent my mother possessed clearly skipped a generation - and landed with both feet in my daughters’ genes, both of whom are keen violinists. My eight-year-old is, embarrassingly, already a better player than I ever managed to be, and is as good as her grandmother was at her age. Just two weeks ago I took the whole family to see the concert which marked the end of her first year with the National Children’s Orchestra (ticket pictured below), so maybe she’ll go on to make recordings of her own in years to come. 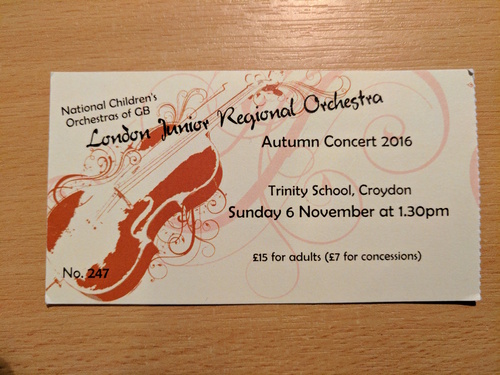